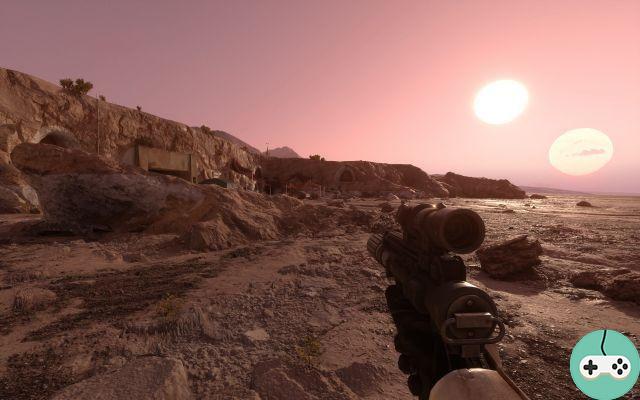 Star Wars merchandise, there are plenty of wheelbarrows ... from the LEGO box to the resin Yoda minifigure possibly used to prop up furniture, it's an industry that works pretty well. On the eve of a big-fan release of a 7th film, EA & LucasArts drive the point home of an already extraordinary promo with a Star Wars Battlefront (SWBF) with ambitions as distant as the stars. 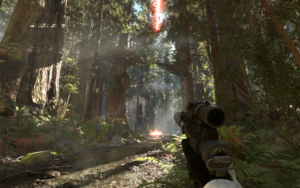 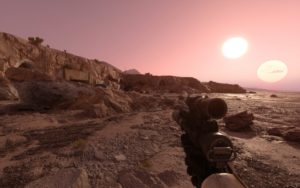 Impressive. This is probably what best sums up the graphics engine and the general production of the game. Whether you are a fan of SW or not, you can only stay with your eyes wide open in front of the spectacle that is being played, especially in the parts bringing together the game. more people. This is nicely staged, rhythmic, stable, fluid and obviously damn beautiful.

Effects of excessive particles (sparks, smoke, debris ...), displacement mapping / tesselation to blow your retina, resolution of textures as we would like to see more in 2015, management of fine shadows and volumetric lighting striking ... this isone of the most beautiful titles of our generation, it is a fact (tested while ultra, resolution 160%). 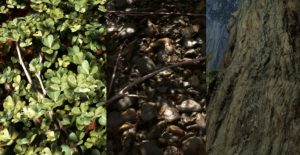 The advantage of a SW is the richness of its universe ... and in particular the places to explore. The cards are grouped together on (only) 4 planets: Tatooine, Hoth, Endor, Sullust and it is clear that it is overall faithful to the movies. The level design is certainly not the craziest, but the GD rounds the edges with large strokes of references scattered on all the cards.

The OST is certainly not innovative but will thrill SW fans since straight out of the film. We live each battle to the rhythm of his most famous music, for our greatest pleasure. Unfortunately, FR dubbing side, it seems to me that some are not original but nothing serious (C-3PO has a kind of bad dubious Asian accent ...).

What stands out with SWBF is also the quality of all sound effects, both very film-faithful and beautifully produced. Whether or not you are equipped with a 2.1 / 5.1 system, the SD is impeccable: both powerful, punchy and well mixed ... it's great art.

With a sleek Windows 8/10 interface with its tiles, it may not be very SW in the look, but navigation is even more pleasant. The menus and the IG interface are clear and quick to explore and thus ensure an excellent grip. 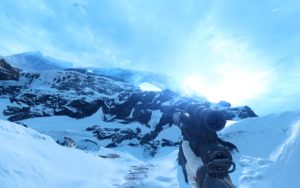 Accessibility of the software

So yes, once IG, the handling seems simplistic, with a palette of the most basic movements (jump, bend, pull, run ...). No more double jumps, runs on walls or any other slips. However, it remains consistent (Palpatine slipping at the throat of a rebel, that's average see me ...) and effective because quickly controllable and that's exactly what EA is looking for. SWBF wants to be accessible and all public, in order to ensure (among other things) an effective marketing stunt.

Supremacy, Walker Attack, and Skirmish modes are clearly the most paced and intense. The 20vs20 modes will remain the most interesting in particular for their spectacle dimension, SW immersion and excessive nagging. In addition, the MME mode (team deathmatch) "Skirmish" represents for my part, the most interesting mode, because it makes it possible to better take advantage of the little gameplay offered while guaranteeing a minimum of survival.

As a bonus, SWBF offers some cool ideas, including: 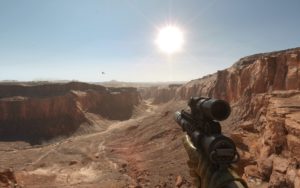 The grip is accessible ... but not very ambitious. We finally quickly made the tour of what the game has to offer us. The range of movements does not necessarily allow crazy use of level design (apart from possibly the JetPack). This lack of madness but that's also the constraint of a universe with well-established codes (I don't see Darth Vader doing a double jump, climbing walls or moving like Tracer from Overwatch).

La spawn management (appearance) after a death is particularly strange. It is not uncommon to reappear between two heavy fires, facing two members of the opposing team or even straight ahead of an AT-AT or under an orbital strike. Why not have made a single or multiple spawn system possibly unlockable and a minimum protected?

Regarding the equipment system, we quickly realize that the shield, grenade and JetPack set is a rather effective combo and makes certain unlockable objects less essential.

Let's talk about grenades precisely. SWBF is a bit of an explosive sausage party. A lot of times, it's who's going to throw their grenade or thermal imploder first. With a simple (rather brief) cooldown, we often find ourselves at the corner of a corridor where grenade throwing becomes a real game of pétanque. Funny, but a little excessive.

The Walker Attack and Supremacy modes are clearly impressive, but if you do not have a minimum of shield, survival is still extremely reduced. Between the cannon fire, the opposing faction, the airship fire, the AT-AT fire, Walkers & ci, the grenades that appear from everywhere and the spawning at random ... as much to say that it is a butchery . Unless you play in cooperation with a team on a vocal, to survive is a luxury, at least for the common people.

So of course, it is first of all very fun because it is immersive and impressive. But once you get used to it, when you start to want to be a minimum competitive, dying in a chain so quickly can become frustrating in the medium and long term.

Some other less interesting game modes

The advantage of this SWBF is that it still offers 9 different game modes, although they have an unequal interest due to lack of originality or exciting gameplay. To die in a loop until killing the Hero in the "Hunt for the Hero" mode: bof bof. Ditto for air battles that do not offer a amazing gameplay, between a relatively unplayable subjective view and a somewhat routine / lazy rhythm.

In addition, we regret the absence of local splitscreen on PC. Still too rare in multi FPS nowadays, it could have worked in its favor in the short and long term. 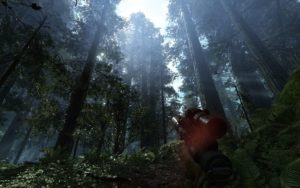 Regarding the features to unlock, we have: weapons, bonus equipment (star cards), attributes, diorama, appearances and other achievements. The star charts remain in reasonable quantity all the same and offer some interesting bonuses including attributes (resistances + ...) and other gadgets.

However, it is a bit light in terms of weapons and appearances are still very limited. Only levels 40-50 will benefit from another choice of race (# laTwi'lekesttropbelle) but is this useful when the first-person view remains - in my opinion - much more interesting and playable? Ditto for a Diorama which will surely please hardcore fans but which remains above all perfectly anecdotal and whose completion is long and tedious.

Finally, Season Pass question at 50 €, it equates to a good blow of the lightsaber in the loaves. Designed to contain as much content as the Vanilla game, all sold for more than the base game (at a lot of retailers), itself having a content problem.

A solo of questionable interest

SWBF is above all a multiplayer game, always advertised as such. That there isn't a single player campaign doesn't bother me, although it actually could have been the icing on the cake. However, there is still a single player mode that boils down to training / attack / survival modes against the AI. The interest of these modes is be able to discover all the features of the game (commands, ships, heroes ...) and to train a minimum, especially for players enjoying the challenge against IA in hard mode.

Only, it is clear that in the end, it is not not very exciting and the "Invulnerability" / "No Death" challenges end up making you want to throw your keyboard out the window unless you're playing co-op or being a big bill. Maybe a mini single player campaign, even if only 3 or 4 hours, would have been better because more refreshing.

Long-term viability of the game

As mentioned previously, we finally quickly made the tour of the game. After ten hours of relentlessness on the solo and twenty hours in multi, what about the future of the game? Of its long-term interest?

SWBF does not appear not be a multi FPS that it is interesting to master, for lack of sufficiently dynamic / lacking gameplay and unlockable content currently at a discount. It is certainly pleasant to play in the short term, because it is spectacular & impressive ... but once the hype has passed and the accustomed to its realization, the bellows fall a little. Only her MME will hang up for a few more hours but I feel that its future will come down to occasional games with friends offline or online, or when adding content once in a while. 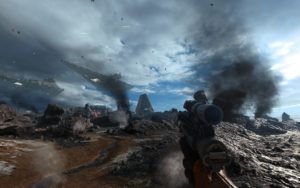 Star Wars Battlefront does not reach for the stars but still surpasses, and with panache, the stratosphere. It's a cool game, without being very good or bad. It is above all a game for all audiences, accessible but not very competitive. With a sumptuous plastic, a perfect sound design, SWBF is certainly worth a look and its com 'is, it seems, successful.

FPS pro-gamers, or more demanding players, will eventually spend their way to another title, but nothing will prevent anyone from occasionally, and with pleasure, rubbing shoulders with the fights on Tatooine for the time of a dive back into the SW universe and a DLC.