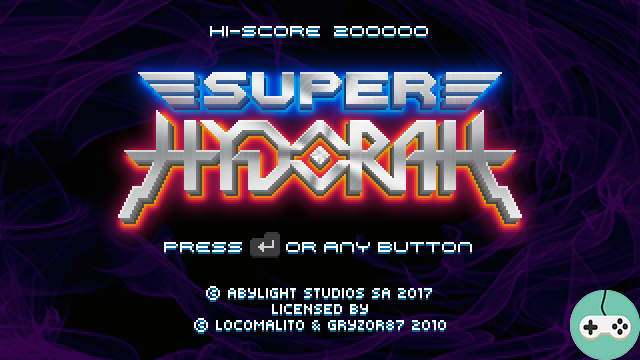 Super Hydorah is an old school horizontal shoot'em up (shmup for friends) clearly taking the example of shmup released on arcade and consoles from the 80-90 era. Its gameplay is really a mix of a lot of great shoots from the era, but it's not a dumb and mean copy. 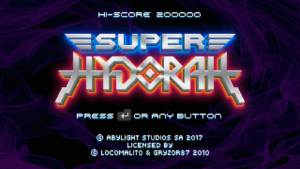 You are in command of a ship with a Vic Viper-inspired look (Gradius's ship) and you will have to survive the levels that will be presented to you. If you've been used to seeing and / or playing "Danmaku" type shoot'em ups (you know, those shoots where the screen is flooded with a rain of several hundred enemy shots) don't be fooled. With the "lack" of fire from old-fashioned shots, Super Hydorah is difficult and a death is the equivalent of losing some of its power and returning to the last checkpoint.

On the gameplay side, after the level serving as a tutorial, each beginning of the level will ask you to choose a weapon, a secondary weapon and a special weapon.
Once in play, the ship is very easy to handle: stick / cross / keyboard key to move, a fire button, and a special fire button and let's go! Some enemies will drop small orbs that will change at regular intervals from one color to another, one will increase the power of your primary weapon and the other the secondary weapon; and if you take an orb while you are at maximum it will increase your score. Another, rarer orb may also drop, larger and offering the choice between three icons:

Finally at the end of each level, when the boss is defeated, you will be given a new toy that can be a weapon, a secondary weapon, a special weapon or other ... 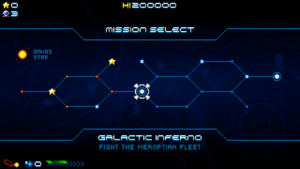 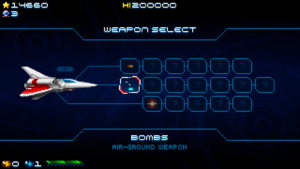 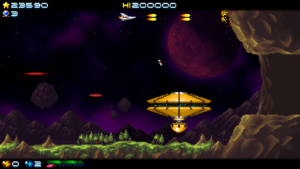 Difficult but not too punitive

Borrowed from Darius, you will be able to choose your levels as well, some are more difficult than others and some of the levels are not even on the "road" to the end of the game. Each of the levels also has a secret.
As for death, it is simple: one shot, one encounter with an obstacle and here you are with a life lost! When you lose a life, you also lose part of your two gauges and return to the last checkpoint. When you lose all your "continues", you will have to restart the level from the beginning or choose another one.


The game is hard, but not cruel for all that: for example your "continues" are unlimited and the game saves your progress. It's entirely possible to stop playing at level three and come back later. 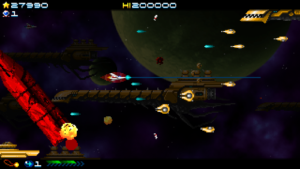 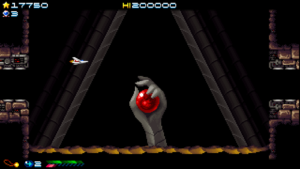 In a few words

And why "Super"? Well this is also an obvious reference to the game released at the time, particularly on the Nintendo console. But there is indeed a game called simply Hydorah, released in 2010 and having had a development of 3 years. Hydorah is basically a Deluxe beta version of Super Hydorah and its special feature is that it is free and therefore will allow you, if you are not sure you like it, to test the gameplay and some levels. 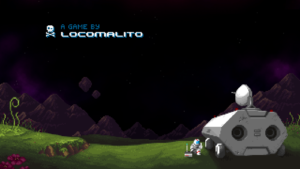 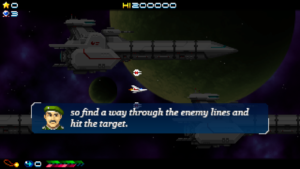 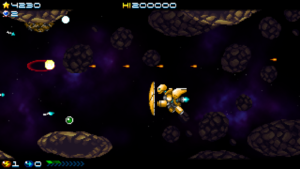