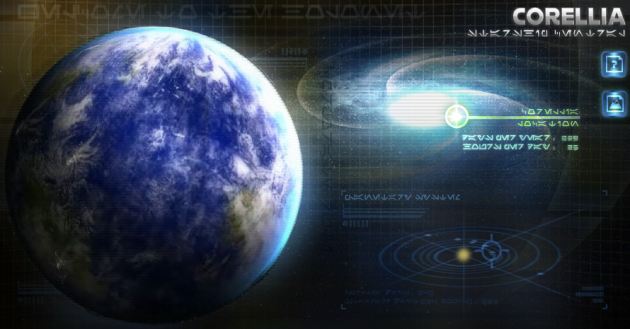 The Corellian sector is one of the most powerful in the Core and in the Galactic Republic. These 24 systems are at the crossroads of two galactic routes, called the Corellian Pass (from Coruscant to Tatooine and beyond) and the Corellian Trade Lane (fork of the Corellian Pass from Corellia to Duro then Bespin and Hoth). It is in this area that engineers (Corellia and Duro dispute the paternity of this technology) have succeeded in copying the rakata technology of displacement faster than the light renamed Hyperdrive.

The colonization of other planets had already started before, but it is thanks to these new engines that the Corellians were able to establish themselves further in greater numbers and therefore lay the foundations of the future Galactic Republic, of which they are obviously a founding members. Hence the names also of these routes that their explorers set up. As to why this sector is named after this planet, it is because most of its members (not all, Duro being the most famous independent) belong to a political entity called the Corellian Empire, whose seat is indeed obviously the system where the planet of the same name is located. 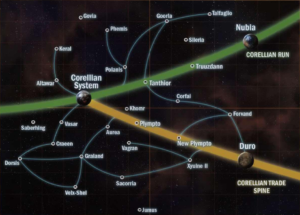 The Corellian Empire is a monarchy (in 600 years, a new dynasty will come to power: House Solo), but it is not the king who holds the effective power. Some time before the Empire started the war of its return, a legislature called the Corellian Council was put in place. An elected body which appointed a prime minister at its head, and it was he who managed political affairs. However, this political system collapsed along with the Cold War, with the Council decreeing that Corellia and the Corellian Empire became members of the Sith Empire. They were overthrown by the allies of the Republic. As the king was not involved in all of this, his image was unaffected by the betrayal and so many expected him to resume the post of chief ruler in these times of crisis and reconstruction.

But the Council alone did not have the authority to declare the area the property of the Sith. We had to force the hand of three other people representing three other local authorities, take them hostage to shake them like puppets. The first was Jonah Carter, commissioner of Corsec, that is to say the head of the entire police and judicial apparatus. Harlon Fane was the representative that the large local corporations had appointed to sit on an economic council. As for the third, it was the matriarch according to Shrona Bel-Il, member of a race originating from another planet of the system. 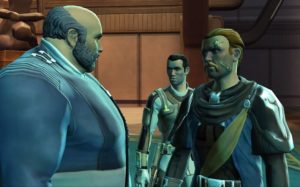 The Corellian system is made up of seven planets, but the two most distant Crollia and Soronia are not habitable. The others are nicknamed the Five Brothers. Corellia is closest to the Sun Corell, a blue and green ball of oceans and farm continents. The second is Drall, whose inhabitants are little fur balls famous for their engineers and theoretical physicists. Then come the twin planets, Talus and Tralus. These two worlds come together because they both orbit in perfect balance around Centrepoint Station, one of the curiosities of the system. This space station was already built when the first shuttles began to visit the surroundings. These two twin worlds do not have a native species, and colonization is quite low. But they are very habitable. Then comes Accordingia, oceanic planet where the large native hairy mammals developed their industry in the tunnels of their islands. Even when their matriarchal tribes move elsewhere, they continue to settle in the basements. Finally come Crollia and Soronia. The layout of Talus and Tralus and Centrepoint Station has greatly agitated the scientific community. And some have even argued that the system was created artificially. Why ? What purpose ? Would the answer be on Centrepoint? (I remind you that the discoveries made after Episode VI must be treated as theories, otherwise it is an anachronism) 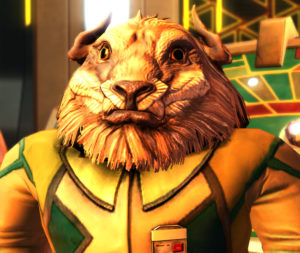 As Corellia developed first, they claimed sovereignty over the sector. Obviously it did not have more to the dralls and according to, which led to the war. The agreements that led to peace served as models for the statutes of the other planets of the Corellian Empire. Each of the worlds that make it up has its own government, but it is subservient to that of the planet Corellia. For planetary leaders, this gives them a certain importance and independence. For the Corellian nobility, ruling class of the planet and therefore of the Empire, this reinforces them in the idea that they are the only ones to count. Which of course has led to many other wars in history. But the status quo remains. The authority of the government of Corellia ended up restricted with the centuries, having to compose with certain groups like for example the colonies according to their planet for certain matters of the Empire. Either way, there has been a tremendous amount of immigration to all the planets in the area. The colonies were once populated mostly by humans, but many aliens have joined them. We find dralls and according to everywhere now, but also Twi'lek, Sullustéens, Rodiens ... and many others still with a Corellian nationality (in the sense of the Empire but also of the planet). 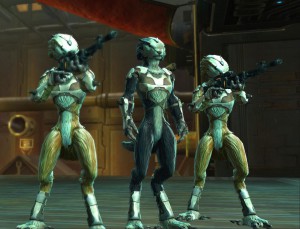 The Corellian Empire is one of the founding members of the Galactic Republic. They provided him with a large number of leading politicians and military personnel. The Corellian nobility derives a certain pride from it. They are therefore also arrogant towards the planets which do not go back as far as towards those "secondary" (Drall, according to ...) of their sector. A feeling reinforced by the fact that they have their own Jedi. They therefore set themselves apart from others. Above, according to the criteria of the ruling classes. But for the less fortunate, in memories of the ancient explorers who established their colonies, it is the call of adventure. Many have become smugglers, professional players (dralls like this route a lot) or even pirates for some. The laws of the Corellian Empire are rather ... lax is not the word, but more permissive than elsewhere. Without going as far as the Hutts' "anything goes", of course. Returning home to spend their retirement, many elders shared their experiences with the younger generations, filling their heads with dreams of what they have accomplished and could still be accomplished. They have thus established a true tradition. The typical Corellian is therefore considered arrogant, daring, scornful of risks and statistics ... In short, a real rascal.