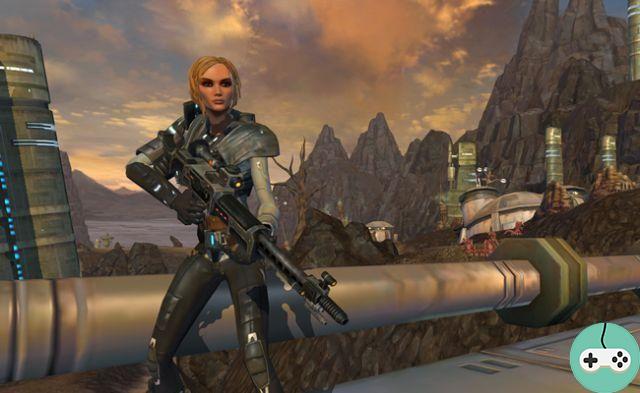 I introduce myself to you, Agent X, new editor on SWTOR GUIDE.

As you may have noticed, I am responsible for sharing with you all the information, more or less secret, about the Imperial Agent class.

It goes without saying that my allegiance to the Empire is not likely to fail anytime soon, and I intend to continue my discovery of this noble class as the game evolves. I will therefore write several guides on AI as well. as complete and synthetic as possible, to transmit to you the knowledge that I will have (I hope) acquired. These articles will concern the PVE, the PVP, but also other information and data useful to our class.

Not having yet chosen the future pseudonym of my avatar, call me Agent X for the moment ...

“Identifying images of Imperial agents are rare: due to their multiple disguises and stealth-oriented combat gear, they are difficult to spot. If there is one common feature in their habits, behaviors, and appearances, it is unpredictability. Most of the missions entrusted to Imperial agents require them to infiltrate hostile organizations. If they are not with their allies, then it is very likely that they are with their enemies. " 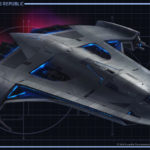 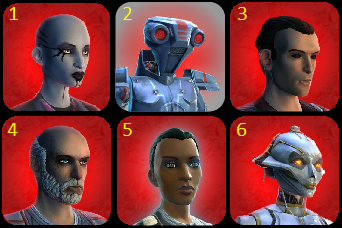 Chosen at level 10, the "Secret Agent" specialization offers your character the possibility of using stealth and a whole technological and vicious arsenal to kill his enemies, or also come to the aid of his partners.

The talent tree therefore breaks down into 3 branches, one of which is shared with the Sniper.

Medicine (Healing): Improves the Secret Agent's ability to heal by reducing the cooldowns of his healing spells and increasing their effectiveness.

Concealment (Damage): Improves the Secret Agent's damage spells by increasing their damage as well as reducing their cooldowns. 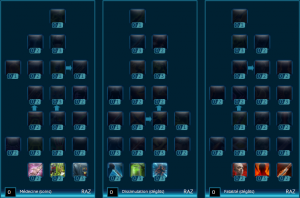 Also available at the tenth level, this channel oriented only DPS and what is more, at a distance (blaster inside), is also divided into 3 branches.

Engineering (damage): Allows you to increase your multi-target DPS. 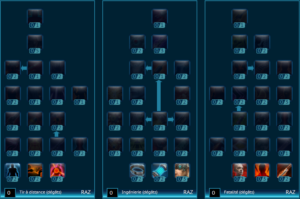 Link to the original: Sniper Tree

Remember first of all that in addition to the life bar, the AI ​​has a second bar called "energy", which is emptied by the use of different spells, and is filled more or less quickly depending on the remaining energy level. The lower the energy level, the less the bar will fill quickly, and a fortiori, the higher it is the faster it will fill, ranging from 2 or 3 NRJ / sec (I have a doubt) to 5 NRJ / s without talents .

Here is a link to the full capabilities of the Imperial Agent. You can arrange them in alphabetical order, level of completion, or even by advanced class.

After testing this class up to level 26, I was able to get a much better idea of ​​AI combat techniques.

This information should nevertheless be taken with a grain of salt, in the sense that my prior affection for class does not necessarily lead me to a totally objective opinion. I will still do my best not to take part.

First of all, the leveling is done without worry. Right off the bat, we have access to half a dozen spells, both ranged and melee. The spells are easy to understand, the sequence to adopt depending on the distance, the number of mobs, or the remaining hit points.

The cover system is very easy to use, except when our character rolls us 10m towards the enemies to take refuge behind a bag of sand that we had not even seen ... A small green hologram us is however represented in the place where the agent can hide, but the habit of the portable cover (which deploys automatically in the absence of hideout in the surroundings) often made me forget this detail.

Then when at level 8, our first companion (Kalyio Djannis) appears alongside us during the fights, it goes without saying that it is the depop?

I then chose to specialize in Sniper. A whole arsenal of blaster fire was then available to me as I leveled up, without preventing me from using probes and other technological capabilities. On the flip side, I could absolutely not cast a single heal, no spell being available for this advanced class.

Whether in PVE or PVP, the Sniper remains mostly a single target dps, although the Engineering tree allows us to be very effective in multi-target damage as well.

Finally, what about the advanced Secret Agent class. Several players have touched me a few words and seem very satisfied with it given the accessibility to stealth, healing, but also to large melee dps.

Here, hoping that this introduction will have been useful to you, I invite you to react just below if you wish to know more or if you detect errors.

- So that the secret remains, we will be silent until silence -


Do you want to be up to date and know all the tricks for your video games? In gamesmanagers.com we enjoy playing as much as you do and for that reason we offer you the best tricks, secrets or tips for you to play non-stop. We offer you quality content and always updated to keep you up to date. That's why, in our website, you will find not only videogame guides but also tricks, secrets and thousands of tips so you can play to the limit. Are you ready to get it? Enter now and enjoy your videogame!
Black The Fall - A dystopian puzzle ❯

SWTOR - Mysteries of the Imperial Fleet # 2

Rift - The megaliths of Storm Legion