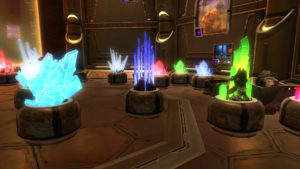 Fireworks is a crafting crew skill, you can only have one of this type per character.

With update 4.0, partners no longer have specific bonuses for team skills.

Now they have bonuses depending on your Influence level. Thus, for each level of Influence, your partner will benefit from:

This crew skill is intended for all classes / roles because it allows the manufacture of many components such as color crystals and sophistication.

Warning: these crew skills can be on another character if necessary because the components are transferable.

You will find the Fireworks trainers at the following locations: