Boarding party is the first contentious area of ​​a series of two in which you will seek to find a prisoner of the emperor who fled to take refuge in a very mysterious place ...

These Flashpoints can be found aboard the White Nova. (Departures from missions> inter-fleet transport> white nova)

This Flashpoint is made up of a lot of trashsmobs, and a lot more elites than in previous Flashpoints, arming yourself with a basic heal / tank / dps group.

Boarding Party is not a scripted Flashpoint, progress from objective to objective, from boss to boss. There is a very large amount of trash with very well supplied packs, do not hesitate to do some CC. Don't forget to complete the bonus objectives in order to unlock the bonus boss too. 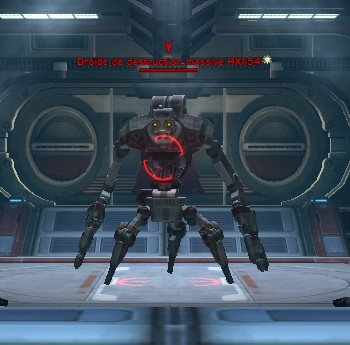 Once the boss is defeated, trashs await you, again and again trashsmobs that will lead you to the next boss.

Here you will have the choice between CC the droids and focus the boss, or kill the droids quickly and then the boss. Just know that at the first droid that dies 3 weak adds will come out of the left elevator. At the second droid that dies 2 strong ADDs will come out of the right elevator. If you have decided to focus the boss the 5adds will pop up at the same time when the boss goes to 50% health. (I personally advise you to CC a droid, to kill the other then the first then the boss)

Head to the next boss!

The boss has an aura that greatly reduces the damage inflicted on healers, so you will have to do more or less as on the previous boss, either CC the two Jedi and kill the boss, or CC a jedi and kill the other jedi then the first Jedi then the boss. As their name suggests, they heal, so it will be necessary to provide kicks!

Once this little trio is defeated, Captain Yelto speaks to you via the communication console, informing you that she has activated the self-destruction procedure, ignore it and continue your journey towards the bridge, on the road you will meet a "Champion" which does not really deserve the title of boss but which still has some techniques. 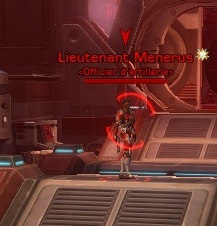 Then continue your journey, if you have done the bonus objectives your next boss will be the bonus.

Throughout the fight he will activate the reactor cores so that they discharge deadly radiation, this radiation will come from the four reactors surrounding the room, each discharge will invade a quarter of the room next to the targeted reactor, quickly get out of this area so as not to take heavy damage.

Although it may sound tempting you will have to kill the droids first, if you kill the boss first it will activate the droid self-destruct sequence, which will cause a wipe, so kill the droids one by one and finish it. boss. Also be careful not to leave the room, the hitbox is very small and the boss drops as soon as a player leaves.

Once the bonus is over, go back up and do the trash quests that separate you from the final boss.

The squad members being immune to any form of CC, natural selection will want us to kill Alon first, take care to kick all the spells you can, his heals are very powerful, once Alon is dead pass on Massey then finally on Jorland. The death of the squad marks the end of the boarding, you will have the choice between killing the remaining crew or not (Alignment). Return to Moff Phennir to be informed of the next objective: The Foundry!