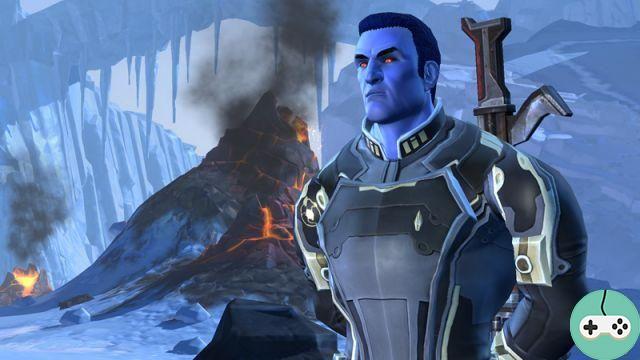 A humanoid species native to the planet Csilla, in the heart of the Unknown Regions, the Chiss have remained isolated on their territory for millennia. Despite a few occasional appearances in the history of the Galaxy, one noted in particular the presence of a Chiss among the contacts that Darth Zannah established on Serenno - they were only known to the general public with the infamous Grand Admiral Thrawn. which unites the imperial forces against the New Republic.

Physically speaking, the natives of Csilla are similar to Humans except for three notable details: their blue skin, their always brown hair, and their bright red eyes. Their discovery being relatively recent, some xenobiologists had advanced the hypothesis that this particular pigmentation was due to a significant exposure to ultraviolet radiation but it would appear that the color of their skin and their eyes are the consequence of chemical reactions with the oxygen that was in high concentration in the air they breathed.

But, apart from a simple red glow, their eyes give them a visual acuity superior to that of humans, both during the day and in semi-darkness. Finally, if they all have bluish black hair, it can happen that some Chiss have gray hair with age, a phenomenon mainly visible in women which is considered a distinctive mark.

According to some scientists, the origin of this people, both so similar and so different from Humans, dates back to an era prior to the Old Republic. They would therefore be the descendants of a human colony but have since evolved sufficiently to no longer belong to this species.

The Chiss were considered by the other inhabitants of the Galaxy as cold beings, arrogant and contemptuous of strangers, even sometimes bordering on xenophobia. They generally remained unmoved and masked their feelings in public, giving them that callous air. Indeed, the Chiss were able to remain unmoved in circumstances that would have overcome the coolness of many species.

Their society was refined, highly evolved and disciplined. They attached great importance to obedience, to honor, that of their people taking precedence over individual honor, and to morality. The center of much debate and the main barrier to Thrawn's intentions when he was in the service of his family, morality was a real doctrine. Resolutely pacifist, the laws of the Chiss prohibited any form of preventive attack or aggression of any kind.

Despite this prohibition, they represented a powerful military force and, after sufficient provocation from an enemy, they did not shrink from adversity. With their poise, their patience, their taste for reflection, observation and their strategic gifts superior to those of many species, they carefully planned their counterattacks. Then they launched into battle, in which they routed their enemies or annihilated them.

This effectiveness, also observable outside the military sphere, combined with their loyalty to their own as well as an unwavering determination, enabled them to repel threats such as the Ssi-ruuk or the Yuuzhan Vong, even by frightening some people. he does. These characteristics were also used by Dif Scaur who asked chiss scientists to create the Alpha Red virus.

Their civilization being mainly based on the army, the Chiss had great respect for the fleets and soldiers of the New Republic and other governments, but on the contrary were quite dismissive towards all those who indulge in mediocrity, who are not able to take charge of themselves and defend themselves and their families. As a result, most Chiss hold politicians in low esteem, far too smug and incompetent in their eyes. The proof was provided by Jagged Fel when he came to Ithor, when he greeted his military hosts while neglecting the Republican dignitaries.

But their life does not revolve entirely around fighting, the Chiss showed a great interest in art and science, traits particularly developed in Thrawn who used them to identify the psychology of his opponents. Finally, they spoke a remarkably complex language, in its pronunciation much more than in its grammar: Cheunh. It would even seem that apart from Jorj Car'das and Ferasi Maris, no one ever succeeds in learning this language or even even if only to understand their commercial dialect: the Minnisiat, however simpler.

Their names have a particular three-part structure, like Mitth'raw'nuruodo, but can be changed during their lifetime. Thus the senior officers chiss abandon their name and their Family the time to prove themselves, before being adopted by a Family, which makes it possible to gain in rank by merit and not by birth. In this way, Admiral Ar'alani only had the end of his name until the end of his career it seems. The following is only a guess on the part of the editor and, despite efforts to match it with what is observable in the Extended Universe, is by no means official:
- The first part of the full name of the Chiss would obviously be the last name itself. Indeed, it is this fraction which disappears in the Defense Fleet to avoid the ascent by the title and the privileges. We thus find the same particle in various Chiss of the same blood: Mittb"And raw'nuruodo Mittb'ras'safis (two brothers), Chaf'orm'bintrano et Chaf'ees'aklaio (uncle and niece)…
- The second part of the full name would be the first name itself. Usually quite short, usually three letters, there is no evidence that it could not be longer. It is found at the heart of the diminutive Chiss, a nickname grouping together an element of each part of the name and being intended for a friendly context and / or between two people of equivalent status. We especially know Mitth'raw'nuruodo dit Thrawn, Chaororm'bintrano says Formbi or Prard'ras'kleoni dit Drask.
- The third and last part of the name would refer to the adopted family of the Chiss concerned. If the Reigning Families are in limited number but many others, minor, depend on it and are linked to these ruling lineages. Thus, Thrass and Thrawn, if they were affiliated with the Nuruodo Family, only the second had the name "Nuruodo" while his brother displayed the name "Safis".

To defend their interests and protect them from the many dangers that surrounded them in the Unknown Regions, they founded the Chiss Ancestry. Ruled by the most influential families, the number of which changed with the times, the Ancestry - sometimes called the Chiss Empire - prospered and expanded to exceed two dozen systems. Important detail, although very structured and xenophobic, the expansion was carried out peacefully to secure neighboring worlds.

In order to ensure the protection of the Chiss people, the Ascendance had a vast army called the Defense Fleet, comprising totally dedicated soldiers from each Family. A particular branch, the Expansion Fleet, was responsible for patrolling the borders, recognizing potential threats and ensuring order over the more recent settlements.

Additionally, after the Galactic Civil War and Thrawn's return to his home region, the Chiss along with the other peoples of the Unknown Regions were also defended by the Empire of the Hand. This military alliance divided them, and although the Reigning Families officially ignored it, a large number of Chiss joined its ranks to unofficially support it. The two governments did not hesitate however when they were threatened and collaborated punctually until the temporary dissolution of the Empire of the Main, after the War of Yuuzhan Vong. 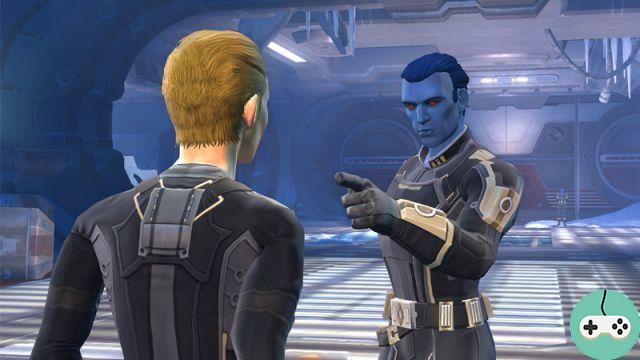 Shadow of the Beast - Origins and retrospective ❯