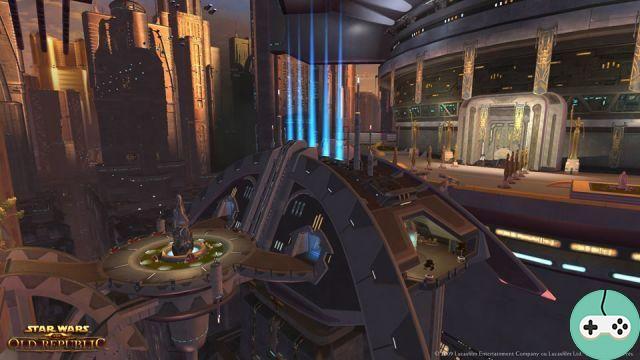 In the military jargon of the Republic, the coordinates 0-0-0 or code Triple Zero do not correspond to the geographical point 0, that is to say the center of the galaxy and of the Deep Core; But to the planet considered to be the center of the Galactic Republic, in the Galactic Core. Is it arrogant? Absolutely, and this is a very simple example of the mentality displayed by its inhabitants, at least in the upper castes, those who can afford to confront inhabitants of other planets. And from the inhabitants of other planets, many come to Coruscant, given that it is the capital of the Republic. 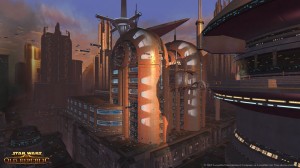 The planet Coruscant is fully urbanized, with the exception of the poles. Ice caps are too large a store of water for anyone to think of touching them. For air and oxygen, plants are grown especially in particular areas. Not in natural terrain, there is no longer any. The constructions have developed over several floors. We hardly remember the rocks that make up the ground. Much less of the reasons the Taung Shadow Warriors clashed at the Thirteen Nations of Zhell. At the time, it bore the name of Notron. The Taungs dominated most of the war, but eventually left the planet. They went to the stars, where after several peregrinations they ended up founding the Mandalorian culture. To survive the volcanic eruptions that shook this world of theirs, the Zhells buried themselves in caves near the South Pole. About 96 years ago, the Columni visited this renamed Coruscant world but considered it too primitive to be interesting. 000 years later, the gree helped build the foundation for the future Galactic City. About 10 years before the Treaty of Coruscant, the Rakata landed and annexed this world to their Infinite Empire. A domination that lasted nearly five centuries until the organization of the masters collapsed on its own. Their technology was recovered and reused. But it was two centuries later that the biggest event happened. With several other planets of the Galactic Core including Alderaan, Corellia or even Duro, the constitution of the Galactic Republic was signed. Coruscant chosen as their capital, their destinies would be intrinsically linked for millennia to come. 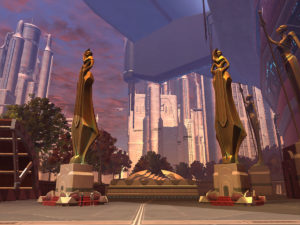 The Jedi are as tied to the Republic as Coruscant. Participating in the government of the Republic, as advisers and armed arms of the executive in particular, they established a post on the planet-capital. In fact, it was for a long time limited to an embassy, ​​a simple office in the premises of the Senate. If more discussion was needed, that office contacted the Jedi Council on Ossus. It was not until after the Great Hyperspace War, when the Sith of Naga Sadow attacked Coruscant, that it was decided to strengthen this presence. A temple was established, which developed over the centuries and became one of the most important annexes of the Order. A millennium later, when Ossus had to be abandoned because of the actions of the Sith Exar Kun, it was this temple on the capital that was chosen to become the new main base. This caused some problems during the Mandalorian Wars, where their failure to intervene resulted in them being accused of being too Core-centric, like the majority of the upper classes in Coruscant. During the Jedi Civil War, they brought the Dantooine enclave to the Outer Rim much further. This was of little use to them since it was destroyed during the conflict. The other temples were abandoned during the First Great Jedi Purge, when it was necessary to hide. During the reconstruction, it was on Coruscant that they relied. They held up well there until the sack of the planet by the imperial forces. The popularity of the Jedi being then very low, they preferred to go to rebuild elsewhere, on Tython. Returning to the small office system in the Senate pending a more favorable period. The ruins of their temple are still visible on the surface, no one has tried to do anything about it yet. 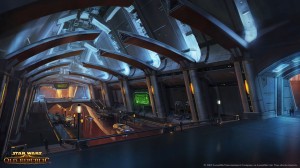 Society on Coruscant is organized according to the layers of Galactic City floors. On the upper floors, near the open air, are the upper castes, those who attend the Senate in one form or another. So with many suites of senators from other planets. In contrast, around the surface, mutant beggars who survive more than they live. Cannibals among others. Between the two, a whole wide range. Rare are those who venture deep enough to be able to cross the mutants, it is far too dangerous. Those who find themselves there are abandoned, and are not much better now. This is very practical for some criminals who would like to get rid of unwanted bodies, dead or alive. These most median levels are therefore occupied by an underworld that has nothing to envy to the most dangerous criminal centers of the Outer Rim. You could believe it on Nar Shaddaa. The Black Sun which reigns there lacks only a large number of ships to be able to compete with mafias like the Exchange or the Hutts. The floors of the local bourgeoisie, mainly merchants, suffered from this bad reputation. If members of Senate teams are likely to visit, or even senators themselves, they are accused of coming to slaughter. As if these levels, so close to theirs, were not monitored and secured. But it is the reputation of the planet: on the roofs the gratin of the galaxy and below the garbage often considered unworthy of mention. 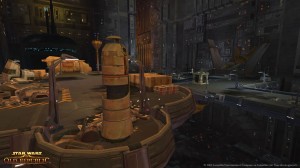 The rampage of Coruscant by the Imperials of Darth Angral and Darth Malgus has left many traces, like the ruins of the Jedi Temple. The upper classes have gathered a lot of donations to restore these parts that are dear to them. Others ? Oh, they can manage, can't they? As always, they turn a deaf ear to these issues. But if we remove the bases, the summit will have a hard time levitating on its own. So much so that the gree had to come back to help fix some critical systems. This lack of care has also generated a certain insecurity in neighborhoods that should have been safe. Either criminal groups that would like to increase their area of ​​influence, or militias assembled to counter them but with uncertain allegiance. New local scandals could be devastating to the planet if allowed to explode. And given her role in the Republic, it would be better for her if it didn't happen.

add a comment of SWTOR - Coruscant, personification of the Republic