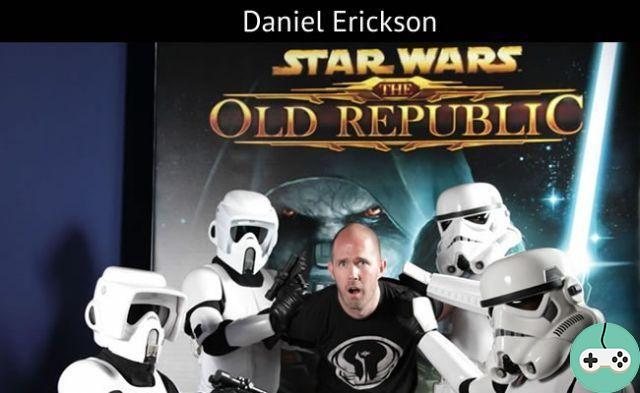 Sithinquirer published an interview with Daniel Erickson yesterday. As you would expect from the title of the site, the questions revolve around the Sith Inquisitor. Read the following interview to learn the names of the actors who voiced (English) the Sith Inquisitor and the sources of inspiration for this class!

Sithinquirer: When did you start to think about what you wanted for the story of the Sith Inquisitor? What stories are we inspired by?

Daniel: Rebecca Harwick wrote the entire story of the Sith Inquisitor, she fulfilled her dream of becoming a master of ancient Byzantine history (if really!) But as I helped her put all the stories together, I can talk about it. First and foremost is the Emperor Palatine. To be both bad and crazy, subtle and clever. Add on top a little Raistlin Majere, a little Moriarty and just an ounce of Dr. Belloq. You are the one who knows what is really going on, the one who has seen enough of the galaxy to become wise or crazy.

Is there a connection between main characters and our own story? Like Darth Malgus, Baras and Angral from the Comics and Darth Jadus, from the new Deceived? Or someone else?

Daniel: Alex Freed's Blood of the Empire series revolves entirely around a main character from the story of the Inquisitor. I recommend you take a look!

Can you describe some companions for us, if possible? We know Khem Val and Xalek, without giving too much detail, can you describe them to us or any of the 3 others?

Daniel: I can say that Khem is the one with one of the most amazing stories for a companion and the Inquisitor's romances (yet unpublished) are not at your normal rate!

Daniel: The first chapter of the Inquisitor is about the secrets of Tulak Hord. With your master, you roam the forgotten regions of the galaxy worlds and patiently piece together the pieces of the mystery of the power of the ancient Sith and your own legacy.

One of my favorite moments in KOTOR is when the master of Korriban asks you to go poison a woman, believing she wants to replace him. You can warn her and she sends you back to poison her. At the final encounter in the tomb, you can choose to betray them both. Will there be political twists like this in the story of the Inquisitor?

Daniel: More than you can imagine.

How much does having been a slave change the way others look at you? Is the Inquisitor able to escape from his past life?

Daniel: When you become a Sith, you must be obeyed by all non-Siths, but other Sith will certainly torment you about that. Being a non-human is more complicated than being a slave.

James Ohlen said he and Daniel were the first to fight to make the pureblood Inquisitor a playable class for the Inquisitors. What is your position on the matter To complicate matters, we saw a good example of one of them in the "The Return" cutscene. He was quite imposing.

Daniel: It wasn't as dramatic as a fight. Writers tend to be purists and there are 2-3 lines in the whole story that are a little weird for purebloods just because we didn't plan them. The final decision was that 15 seconds of awkwardness was deserved to give players a race they really wanted. So the purebloods are here! And the artists did a great job of going back and making sure all of the Inquisitor's complexity and slave chains go to the Purebloods as well.

And my last question is about voice actors. Who are they for men and women. What made them good candidates for this role?

Daniel: Our Male Inquisitor is played by Euan Morton and our Female Inquisitor is played by Xanthe Elbrick. The two brought up some interesting ideas about their completely unexpected roles. Xanthe, in particular, brings a subtle understanding of her character and has the ability to convey a lot of meaning as she says something entirely different.

FFXIV - The Lighthouse of Sirius ❯

Add a comment from SWTOR - Daniel Erickson: The Inquisitor Sith