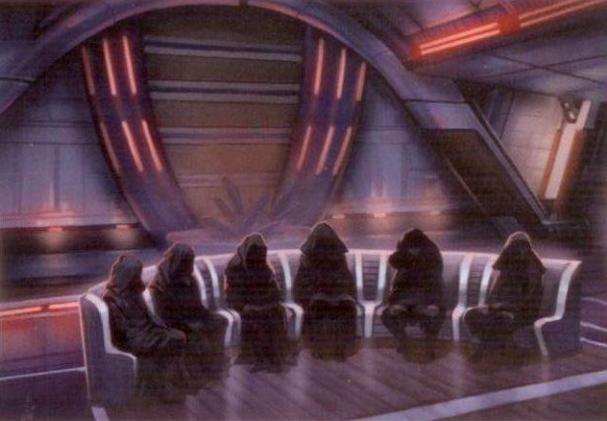 Please note, this article contains revelations on quests on a planet on the imperial side, as well as areas for daily quests and operations beyond 50.

What were they before they started studying the Phobis artifacts? Not much. Oh, they did have little reputations. Bestia had started her career single-handedly suppressing a slave revolt on Ziost. Brontes, the other female member of the group, was carrying out studies that the Emperor himself had to approve. Calphayus, Styrak, and Tyrants were formidable military leaders. And for having established himself as their unofficial leader, there is no denying the talents of Raptus. But neither of them have ever carried the title of Dark. In a way, their rise in the hierarchy stopped when they got together on the same task. And yet, it was from that moment that they became more powerful than ever. They have become the Dread Masters. 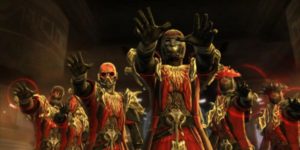 the Dread Masters, appearance out of TOR

When these five Sith teamed up with Brontes to study these artifacts she was studying, something strange happened. Their minds moved closer to each other. While two followers of the Dark side generally seek to eliminate the other seen as a rival, they had grown into a tight-knit, united group. Like a creature with six heads, each with its own characteristics, but with a single objective. More visible was the increase in their power. The Emperor saw an opportunity for a new weapon in them and treated them with great interest. He allocated a wing for them in his palace, where they could meditate and practice. Then, when the time was right, he unleashed them on the Republic. Their power was such that only the six of them succeeded in destroying entire enemy fleets. A threat of prime importance. But as the Emperor kept their lair hidden, it was very difficult to be able to surprise them and therefore to have a chance against them. Jedi knight Jaric Kaedan managed to get hold of the information and, leading a Special Forces commando, led a raid to capture them. It was announced everywhere that the Dread Masters had been killed, but in reality the prisoners were locked in stasis chambers on Belsavis. 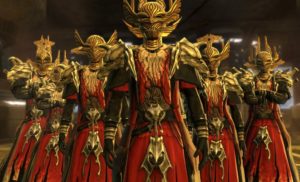 Several decades later, the Empire will learn the truth. As soon as the Treaty of Coruscant was broken and the war resumed, a raid was organized on the prison planet. Under the direction of the Imperial Guard, and therefore under the orders of the Emperor himself, orders were given to recover the Dread Masters. It wasn't the only plan he had here, but it was the one he deployed the most troops to. Unfortunately, the officers there made a strategic error. Hoping to benefit from their help, they freed as many prisoners as possible to provoke a riot. They thus freed an alien race locked up by the predecessors of the Republic, absolutely not ready to negotiate an alliance. They built a stronghold in the area where the Dread Masters were locked up, even planning to use them as a sacrifice in one of their rituals. A raid managed to reach them before the last moment and they were released. They then returned to the imperial bridgehead on foot, unleashing their powers to get back in shape. Recovered, they were immediately transferred to Dromund Kaas where they were to be received personally by the Emperor. Unfortunately, it was kept busy with the scheming of Darth Baras, and then a Republican raid targeted it. Unable to wait any longer, Raptus convinced his comrades to free themselves from this master who did not esteem them at their fair value. 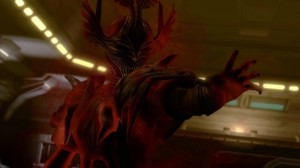 The Masters of Fear approached other Sith and Imperials, while hiring mercenaries. They formed a fighting force which they named "Hosts of Fear". Their fidelity is ensured by witchcraft on the Dark Side that modifies them. They tested them where the two great powers at war did not look: at the edges of the Cartel Hutt territory. Their actions prompted Supreme Mogul Karraga to react, but he struck at random without knowing who he was dealing with. Their first official affair took place on Denova, through mercenary chief trandoshan Kephess. He was defeated, but it mattered little to his masters who revealed themselves. They sent their now official troops to Belsavis, in Sector X, to recruit new prisoners. They tried to open a new front in Gree territory. Their agents attacked the Arcanum, a reserve of artifacts of the Emperor and the Black Council, to seize the seeds of rage that they planted on different planets. Each time Empire and Republic sent troops and overwhelmed the Hosts of Fright. But these were not points they planned to hold for long, they stayed long enough for their intended goals. 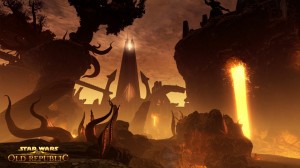 On Darvannis, while attempting to recruit new mercenaries, Styrak was killed. Their first major defeat and it hurts a lot. The death of one of them throws chaos into their common harmony and the spirits of the survivors slide into madness. They struggle to contain the power that the Phobis artifacts have bestowed upon them. On the advice of Calphayus the prophet, they fell back on Oricon. Here they were able to set up a trap where their enemies could break their teeth. Separated, Republic and Empire suffered heavy losses. But when they received reinforcements, the officers considered an alliance to double their forces. Alliance at your fingertips, poorly followed in many corners and of which the higher authorities did not have to be informed. The trap was overturned. The Dreadmasters attempted to program missiles and their fleets to destroy enemy capitals, but this only served to make their opponents more urgent. Their fortress was taken by storm and they fell one after the other. Brontes, Bestia, Tyrans, Raptus ... Only Calphayus might have been able to survive by surrendering to the Republic, but this is not confirmed. The threat they posed has finally been eliminated. The Dread Masters are finally defeated.