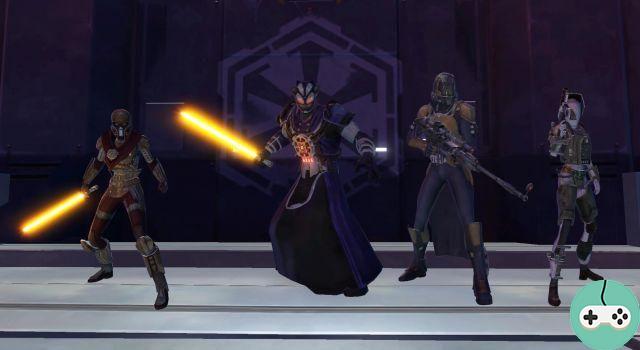 We've got a new gear guide for you at level 55, actually a translation of Dulfy's guide by Belfoz, from the LaCieTrouille guild on Mantle of the Force. This guide replaces the already existing but obsolete one proposed to us Furyo, also a member of LaCieTrouille.

You will find all the basics there to allow you to pack your equipment in peace.

What to do with Planetary and Classic distinctions?

Now, the new 50 will no longer receive free gear, such as the Tionist before. Instead, they must equip themselves with a combination of Planetary and Classic accolades.

You can use your Planetary Distinctions to purchase 58 (or 25) armor, mods, and sophistication from the Makeb vendor (distinctions) on the fleet and on Makeb. These are Rakata level modifications. Armor / Grips / Cannons cost 10 Planetary Honors while Mods / Sophists cost 4. You have a storage limit of 100 Planetary Honors, but no weekly limit.

If you need more gear, you can do a few days at Ilum, Belsavis, Black Hole or Sector X for Classic accolades. Those who prefer group play can use GoL for ZL HM or Level 50 Operations which will allow them to obtain Black Hole and Hazmat gear (61/26 and 63/27 respectively).

Classic Honors are used to purchase Campaign equipment from Classic Equipment vendors on the Fleet. These Campaign gear still have their set bonus, but it is not cumulative with the level 55 gear.


How to obtain classic distinctions?

This section answers the question in a basic way. For more information on the different bearings, see the following sections.

Ideally, if you've leveled up through Makeb's quests, you should have or near “Hero” reputation rank. This earns you the Artifact Quality Main Hand for 80 Basic Honors from the Makeb Reputation Vendor. For Artifact-level armor, you can do the Oricon questline in story mode, which should provide you with a full 5-piece set. For the remaining parts (Off Hand, Implants, Earpiece, Waist, Wrists), you can either purchase them at the HV from Crafters, or save Basic Honors to purchase Black Market gear.

You can do Lvl 55 Flashpoints, Dailies, etc. to get Basic distinctions and get Black Market gear from Basic Gear vendors. If you need the set bonus, plan to do operations in story mode to get the Arkanian gear.

You can also save 350 Elite Distinctions for the Main Hand sold by the Reputation Vendor of CZ-198, or purchase a 31 Barrel / Grip from a Crafter. These are the best guns / grips you can get without doing operations.

Always upgrade your equipment if possible. You don't have to use the purple upgrades (28) right away, you can start with the blue ones very well, the stat difference being minimal. You can buy them at the HV or make them yourself. Each upgrade requires a Type 9 upgrade kit.

New in patch 2.4, players who complete the Oricon questline in Story mode (level 55) get these 5 pieces of Artifact-grade gear, with a rating of 156 and mods of 66. These pieces are linked by wearing, they can therefore be sent to rerolls, donated or purchased at the Galactic Market.

With Basic Honors, Crafters can purchase Blueprints for Belts, Wrists, Secondary Hands, Earpads, and Implants from the Blueprints Vendor in the Crew Skills section of the Fleet. The blueprints for the belts / cuffs cost 15 Basic accolades, while the rest costs 60. In addition to the cost in accolades, Hero rank in Makeb's reputation is required, however this does not apply to item one. once crafted.

They can be purchased from Makeb's Reputable Seller for 80 Basic Awards each. Hero rank in Makeb's reputation is also required.

The difference between the two is like the one you could find between TN and Campaign before 2.0. MN gear has no set bonus and can be obtained in ZL HM at level 55 or can be purchased with Elite accolades, while Arkanian gear has a set bonus and is obtained only through level 55 operations (atria and implants can also be obtained from the last boss of the ZL "Czerka Core Fusion"). In addition to the set bonuses, the distribution of statistics is slightly different.

These ZLs are easily done by players equipped with Dreadguard / Hazmat. Players with TN / Campaign gear or less will be better off acquiring a few pieces of Artifact gear before they can go quiet.

The 4 ZL HM lvl55 each have 2 bosses that give items from the MN. The bonus boss (which usually requires killing 80-85 mobs in the ZL to unlock) gives a random MN item, while the final boss gives a fixed set of items.

Since these MN pieces do not contain a set bonus, it is advisable to extract the modules and sophistication in order to learn them through reverse-tailoring.

Basic distinctions can be used to purchase MN equipment from the Basic Equipment Vendor on Makeb's Fleet, Orbital Station or Surface, or the various level 55 Daily Quest areas (CZ-198, Oricon) from level 55. This equipment does not include any set bonus.

Keep in mind that Arkanian gear set bonuses do not stack with your old level 50 gear.

These NM operations are easily done by players equipped with Dreadguard / Hazmat. Players with TN / Campaign gear or less will be better off acquiring a few pieces of Artifact / MN gear.

All bosses have a chance to drop one or two MN coins. These loots are not predefined and are purely random. The first 2 bosses of CVA NM and the first 3 bosses of RiM NM only give MN coins. The next bosses start giving Arkanian tokens.

Note that Golden Fury is more of a wild card when it comes to loots, with a chance to drop any Arkanian coin in Story Mode.

You should have at least full Artifact gear to attempt these operations in NM. Getting a few pieces of MN gear will increase your chances of success.

The first bosses of each operation give one of two possible token, so you won't always get the one you want the first time.

The last two bosses in these NM operations grant a random Underworld Token and a random Verpine Coin instead of the usual MN coin.

HOW TO GET BASIC AWARDS

Remember that there is a weekly limit of 500 and a total storage limit of 1000 Basic distinctions.

Similar to the difference between MN and Arkanian, Verpine gear has no set bonus and can be purchased with Elite accolades or as a random loot of operations, while Underworld gear is only obtained during HM level 55 operations. Keep in mind that the set bonus of your Underworld gear is not cumulative with that of your old level 50 gear, but rather with that of Arkanian gear.

These items can be purchased from the Elite Equipment Vendor in the Fleet Reserves section. The main hand can be found with the reputable seller of CZ-198.

* The main hand you buy here is only index 162 (Arkanian) and requires “Champion” reputation with CZ-198.

These level 55 HM operations (CVA, RiM, Golden Fury) can be attempted by players in full Dread Guard gear, but you may need to upgrade your gear a bit with MN / Arkanian to get more. of success against the enrage timer. CVA HM is much easier than RiM and players are encouraged to do CVA HM first to gear up a bit before attempting RiM. Golden Fury on Makeb, on the other hand, is slightly more difficult than most op bosses, due to tight enrage time and low tolerance for errors. Similar to Arkanian loots, Golden Fury on HM has a chance to drop any part of the Underworld.

Verpine / Underworld gear mods can be crafted by retro-crafting blueprints.

HOW TO OBTAIN ELITE AWARDS

You will receive Elite Distinctions with level 55 HM ZLs, daily group research and bonus bosses from these ZLs, operations bosses and their associated Weekly. Note that 16 Ops give 2 more Elite Distinctions per boss compared to 8 Ops at any difficulty level. Additionally, operations at 16 in NM give Ultimate honors, which are covered in the next section.

* All bosses other than the bonus one give 2 distinctions each. You also get 1 distinction for completing the ZL.
** except Sunday when you receive 4.

Patch 2.2 introduces Nightmare Mode for CVA and RiM. In addition to the Elite and Ultimate accolades, these operations reward you with Dragon Kell Equipment Tokens, as well as Shadow Equipment (same as Dragon Kell equipment with no set bonus). These items of equipment cannot be purchased with distinctions or crafted.

These operations require at least Verpinen / Underworld equipment. A few pieces of Dragon Kell / Shadow gear will make things a little easier. Note that the first bosses of each operation and Grob'thok give a random token among two possible.

HOW TO OBTAIN ULTIMATE AWARDS

With so many daily and weekly newspapers, all offering half a dozen different distinctions, it becomes difficult to navigate.

Again a big thank you to Belfoz for this work.


Do you want to be up to date and know all the tricks for your video games? In gamesmanagers.com we enjoy playing as much as you do and for that reason we offer you the best tricks, secrets or tips for you to play non-stop. We offer you quality content and always updated to keep you up to date. That's why, in our website, you will find not only videogame guides but also tricks, secrets and thousands of tips so you can play to the limit. Are you ready to get it? Enter now and enjoy your videogame!
Skyforge - Guide de l'Assassin ❯