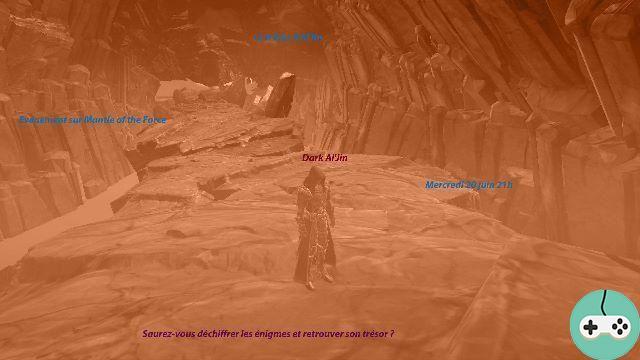 Mirlina, former player of the Hssiss server, soon to Mantle of the Force is organizing an event on her new server: a treasure hunt.

The galaxy lives through troubled hours. The Jedi and the Sith clash on many fronts, opposing their sometimes very narrow view of the Force. The Republic and the Empire clash from planets to planets in the hope of gaining the support of neutral worlds before re-starting an all-out war that many seem to be well underway. In these dark times, everything can be important. The arms race is taking on unprecedented proportions. Planet destroyers, sun supercharger, spike camouflage system. Nothing will be spared in these clumsy attempts to secure a bonus against his opponent.

But knowledge is also a very powerful weapon. A Sith Lord left behind a treasure. The Republic-backed Jedi Council sent a group of researchers to locate said treasure.

The Sith has no known tombs. His power, although recognized, remains enigmatic and gives him interest in the eyes of the Jedi.
But the incessant battles forced the squad members to go their separate ways. Blockades and pitched battles prevent them from leaving their respective planets or areas. Each of them, however, has part of the solution that will allow the discovery of the treasure.

The Republic begins to lose interest in the matter. But the intrigued Jedi Council makes another call: "Although war is upon us, we do not forget ours. A team of researchers, in search of potentially interesting or dangerous knowledge, is on the move. is found scattered across the galaxy. Only one has returned. We call on the brave souls of the Republic to volunteer to save these people and collect the information they have in order to find this treasure.
May the force be with you."

Concretely, this takes place on Wednesday June 20 on Mantle of the Force and will start at 21 p.m. sharp on the Fleet of the Republic (plan to connect 5 minutes before at least!). It is open to anyone interested, at least 25, therefore owning a vehicle and their vessel.

Clue givers, former researchers, guards or even scholars, are divided and scattered over various planets. Alone, abandoned, suspicious and sometimes even attacked or taken prisoner, they wait on the various planets. Via puzzles, they will lead you to the next clue giver who will do the same, and so on until the end point. So a simple treasure hunt!

You know what to do on Wednesday! And do not hesitate to react on the forum or here if you have any questions!

Do you want to be up to date and know all the tricks for your video games? In gamesmanagers.com we enjoy playing as much as you do and for that reason we offer you the best tricks, secrets or tips for you to play non-stop. We offer you quality content and always updated to keep you up to date. That's why, in our website, you will find not only videogame guides but also tricks, secrets and thousands of tips so you can play to the limit. Are you ready to get it? Enter now and enjoy your videogame!
SOS Studios: Immortal Empire ❯