Updates at the end of the article

Yesterday, we told you about the EA conference which will take place on Monday at E3 and which will therefore focus on the famous #FallenEmpire corresponding to the title of the next expansion: Knights of the Fallen Empire. Last night you may have received an email from swtor.com, but maybe you haven't noticed? It does not matter, we are here to relay its content to you and analyze it!

An email therefore, titled "A Threat Rises in Star Wars ™: The Old Republic ™" with a single line of text: A New Threat Appears, June 15th, Prepare to Face Your Fate. A new hashtag is linked to this #FaceYourDestiny and also a very realistic image that can be displayed in larger size on the official site.

Let's analyze this image a bit and what we can see in it.

An image that raises many questions and makes you want to be Monday watching the EA conference live from E3.

Note that a slightly different version of the image was posted on SWTOR's official social networks:

The framing going up a little, the jedi having fallen and the ship being exploding, this increases the probabilities that these images are taken from a video! Hopefully this is indeed the case.

We can better see the ship on this second shot the details of the ship which has a lot of similarities in the fuselage with a Thranta class shuttle (like the Esseles). The only concern residing in what appears to be the front canopy, here in the wrong direction (vertical instead of horizontal).

Here is an image listing the comparable points in order for you to better visualize the identical points. 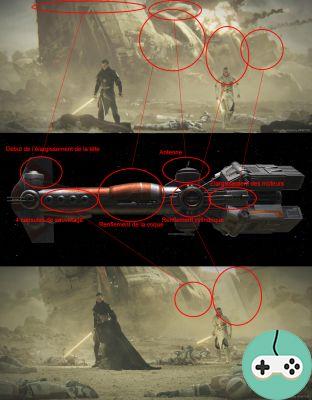 We find once again our two twins, at the head of an army in full armor, shields and weapons resembling force pikes? Their weapons look very strange as well as their helmets. In addition, their shields feature a logo whose style is reminiscent of rakata designs, including the logo of the Infinite Empire (which is a fallen empire) or the Star Forge. Are we going to release a new Forge? The answer Monday! And you surely go in the night of Sunday to Monday for a last image "In a day"?


Update of 15 / 06 / 2015 : The last image has arrived ... and it took me a while to update this article as it left me skeptical at the start ... These two flags and these four sabers that I let you discover me. took a little while to analyze in more detail.

Some on the game's Twitter have expressed concern that the black saber on the Imperial Flag is Darth Marr's ... Rest assured, it's not his. As shown in this capture from a cutscene of Shadow of Revan. We notice the much shorter fins on the hilt of Darth Marr's saber. 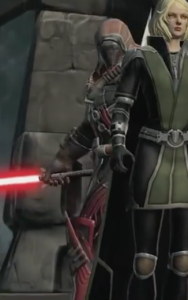 Nevertheless, I suddenly investigated a little on the swords that we know, to compare them to those of this mysterious image. It would therefore seem after research, that the sabers present are the following from left to right. Kao Cen Darach, vindican (but a version of the saber cut in half), Ven Zallow et Malgus ! Here is for each, in order, a capture from the "Return" and "Deceived" trailers, I advise you to watch them for more detailed views and from several angles.

It will be noted however that the sabers of the two jedi are very close and that neither of the two is supposed to be really white (but the paint exists). In addition, there are also very small differences in the grips (the black rubberized parts) of the first and last saber.

It could therefore be that these sabers are not those of the characters mentioned below. In the event that it is indeed them, the common point of all four lightsabers is Malgus, who killed each of the other three owners (these are in order: The master of Satele Shan, his own Sith master , and the Jedi of the Coruscant Temple sack). I find it hard to see how anyone could have got their hands on these four sabers ... unless that someone was Malgus! Could it be Malgus' sabers and trophies that Malgus would have given to the twins? Does all this have to do with the Rakatas? Is the answer 42? We will know that tomorrow!

SWTOR - The Chamber of Eternity by a Scholar

Add a comment from SWTOR - Face Your Destiny: #FaceYourDestiny (Update 2)