SWTOR - Gabe Amatangelo at the SWTOUR 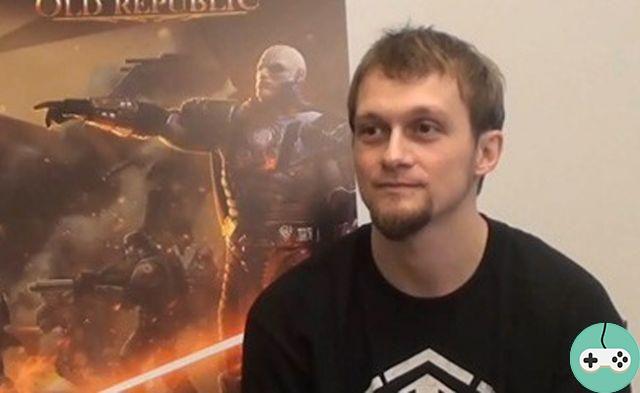 During the first day of Fan's encounter, DarthHater had the opportunity to chat with Gabe Amatangelo regarding the open PvP world of Ilum, Void Star, Flashpoints, and Operations. I offer you a translation here!

DarthHater: Is there a size limit for Guild vs. Guild. In theory, is it possible to be in a group of a hundred, if you are in a large guild, against a hundred others?

Gift of Amatangelo: No. Currently, the group size limit for Operations is 24. We're going back and forth on this but it's 24 at the moment.

DarthHater: In the open areas, how are you going to manage the population balance? For example, if one side is really more numerous than another.

That's what the mechanisms are for. We are currently testing different mechanisms. It's a capture system, with 5 points, you have to keep those 5 points. If you're 100 to 20, those 20s must be somewhere. You must divide to win, thanks to obtaining some kind of enhancement, called "War Effort". This improvement stacks up and it gradually increases. How much you get by killing or how much you get by exiting War Zones comes in defending a point and you can continue to stack this upgrade by receiving again. So if there is a group of 20 against a group of 100, they're at a point, they keep it and if the 100 decide to go and assault the north, they start to move over there and your guys can move elsewhere, keep dividing them. But of course we want to keep killing players because that's where the value comes from.

DarthHater : Can you tell us more about the size of the war zones compared to what we have already seen?

It will always be 8 against 8.

DarthHater: For all war zones?

DarthHater: Are warzone groups only made up of players from the same server?

Currently, yes, from the same server.

DarthHater: In the Void Star there is attack and defense, what happens if the defenders keep their positions? Is there a 2nd round? Or..

DarthHater: Is there a maximum number of players on Ilum?

No. Actually there is a limit but I don't imagine players will hit it.

DarthHater : So you can be hundreds on both sides, is there an accurate estimate?

I can't give a number but it will be a lot, yes.

DarthHater: Still on Ilum, will it be persistent or constant?

It's constant. It is not a countdown. It will always be there. The countdown is when you destroy enemy vehicles and your vehicles are able to fly. It takes 5 minutes before your vehicles become vulnerable to attack, this is the only timer. Other than that, if you want to wake up at 3am to steal the area from the Empire that seems to dominate it while you are part of the Republic, you can go there.

DarthHater : The challenge in an open PvP world is for both factions, what if one faction is not as populated as the other? Is there any incentive or anything, a mechanism created to help ensure a balance in the population of the 2 factions.

That's the challenge in an open PvP world and as soon as you start introducing systems then it stops becoming an open world to some extent. So we decided to build on it, and of course, it will be moderate and it will have adjustments after launch, but what we're relying on right now is the mechanics. And like I said earlier, there are 5 goals, and you have to keep all 5 to be in control. If they are 100, to get all the points they have to split, 20 per objective and even if you are only 20, there are many more of you.

You can fight on any of the objectives and theoretically have a fair fight. As soon as your opponents start moving towards you, they leave a point, so you can go to that point, assault one of the other points, or another base. Thanks to the war activity that you have, you continue to stack this war effort improvement, the latter increases the amount of Value obtained for each death but also the bonus obtained at the end of a War Zone. So if you go at 4 in the morning, and nobody's around, you're like, "Ah, I'm going to go there and take some targets and then do some war zones." You can stack these upgrades independently, so you have a reason to go whether there are people or not.

DarthHater : Did I hear you say that operations can be at 24?

Operation groups can be 24, but the maximum is 16 based on the current content of operations. Likewise, you can form a party of 24 players and you have 24 people, all in the same party, and you take them to the "Outlaw's Den" where you and your allies fight everyone.

DarthHater : So you're not talking about the groups for the Eternity Chamber?

DarthHater: We still can't go with a whole group of 8 players to Warzones?

DarthHater: You were saying maybe later you would allow it. What kind of queue are you looking for that?

Once you start doing 8 ... there are a number of people who want to participate in these teams, so I would say that on this point we are looking for the inter-server to offer 8v8. Across the community, everyone wants to participate, including people who register alone or with a few friends. Afterwards, you have things like Huttball which can bring the same side together, to keep starting (popping) the matches. You have a tight-knit community within PvP, we strive to do with them. But before we start exploring these other things, like 8v8, tournaments, that kind of stuff, we're already going to start looking at getting people into Warzones first.

DarthHater : How long will it take to complete an Operation?

DarthHater : How is the transition from Hotspots to Operations when players have never done Operations before?

They have a path. For example, in Black Talon and on the Essles, the adds keep coming in, but two people can cope with them. And there's this guy in Black Talon ... he throws a "plasma probe" that keeps pulsing. But immediately after throwing it, he elbows to push you out. It's like, "Dude you don't wanna stand in a void area, get out of the fire." So there is a kind of learning, to allow people to be familiar with the mechanisms.

DarthHater: In relation to a new take on enraged times, is there anything in particular that you want to show?

add a comment of SWTOR - Gabe Amatangelo at the SWTOUR