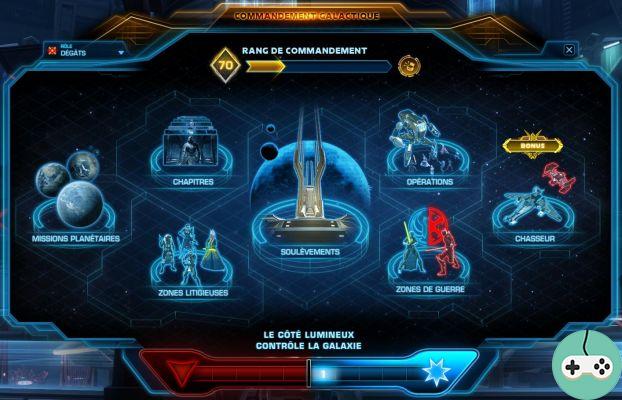 Already criticized by part of the community even before its launch for its randomness, the Galactic Command System is the new high-level progression system to obtain the new equipment. Cumulated with the removal of expertise, it allows to standardize the PvP and PvE equipment which will now be the same. But what do we know about this system after three weeks of exploration? How does it work and what changes have been announced in response to the many criticisms from the community?

Let's come back to these points through the various sections:

Before getting into the details of the mechanics, remember that this system is currently only accessible to subscribed players whose character is level 70. 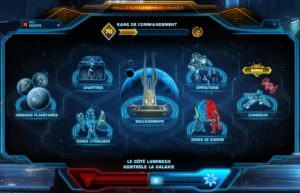 The command system includes 300 levels that you will need to climb to access thirds 2 then 3 of equipment. Passing a level gives you a command box to open (in your inventory). Each crate contains between 3 and 5 items including at least one of these three types of items: 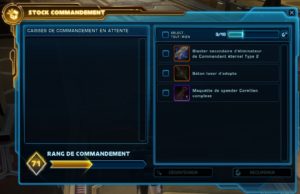 In this way, you can obtain gifts from partners of grades 5 and 6 and of any quality. Orange gear is modifiable and is intended to provide the new expansion skins, regardless of your level. The system is different for pieces of equipment since, depending on your level, you will obtain command crates of ranks 1 to 3 which will give you access to the various tiers of existing equipment. Here are the level ranges by type of body:

From level 300, your progress will not be stopped because it will still be possible to obtain command crates by filling a fixed experience bar. In short, you will have to loop through the level 300 experience to have the following crates and obtain the missing equipment if you have not already completed it.

To level up, you will have to… play the game! Just keep playing as you used to and the levels will go up on their own. And this without limit other than the time you will spend in front of your screen. But if leveling up gives you buttons, you have two options. The first is not to worry about it and the second is to try to go as fast as possible. Here is a debrief of the most profitable activities to level up quickly.

Activities Ranked PvP are the most profitable. If they sometimes suffer from the server population, they remain the most interesting, in particular the group ranked arenas that earn more than those where you register alone in a queue.

After that, the operations are the most interesting. And the higher the difficulty mode, the more command points you will gain. This method offers a clear advantage over PvP which is the point storage. Indeed, each boss will allow you to recover a PEC pack which will provide a different number of command points depending on the difficulty of the operation and the quality of the pack. You can then use it at the time of your choice.

Then come the uprisings then the contentious areas. Finally, the bottom of the table is divided between le galactic hunter, chapters and planetary missions. As with operations, if it is possible for you to increase the difficulty level then the chosen activity will earn more command points.

Here is galactic command interface accessible by default via the shortcut ctrl + G. It contains several information such as a central area providing access to the various activities and other information on the periphery of this framework.

At the top left, you have the interface of role selection. This is what will determine the role you want to play by signing up to a queue like the hot spots. Currently, the old interfaces are still relevant and you can go through them very well, the command rewards will also be awarded to you in the same way. The advantage of the command interface is that if you are alone, a single interface will suffice to access all the content. For advanced content, for example group or ranked for PvP, I advise however to go through the old interfaces in order to benefit from the possible choices but nothing prevents you from going completely random.

At the bottom is the battle status display between the dark and light side. Here the bright side had the advantage of a grade. When theone of the alignments wins the round, a one hour countdown launches and all characters with this alignment win a command point bonus (or cxp). This is the optimal time to use any PEC packs that you might have picked up and stored previously. This victory is also accompanied by other mechanics specific to the Dark Vs Light system that we will not detail here.

In the central area is an indication "Bonus". This means that the activity indicated in this way earns more command points for the day. The chosen activity will thus remain enhanced for 24 hours, the change being made at the same time as the resetting of the daily quests (13 p.m. or 14 p.m. according to winter time or summer time respectively)

Finally, the top of the interface displays your progress in command levels through a level indicator and the corresponding experience bar. To the right of the experience bar, you will find a button allowing you to access the command storage system, a system allowing the opening of crates and the recovery of equipment.

The following two images show the process of opening the checkouts. 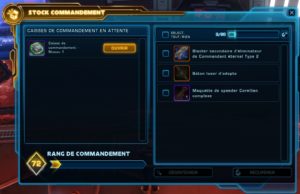 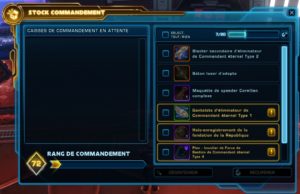 To retrieve an object, you must select it and click on the retrieve button. It will then go into your inventory and become impossible to disintegrate. Likewise, if you choose to disintegrate an item, it will be impossible to recover later. On the other hand, disintegrating an object will allow you to gain more command points and level up faster. In general, unless you equip it, I recommend destroying received items.

As in the previous expansions, the equipment is divided into three thirds and different qualities. Each quality is associated with a color, the correspondences of which are listed in ascending order of quality:

At each third it is possible to acquire equipment of Artifact quality and lower and, for the highest level, it would be possible to acquire equipment of legendary quality, even more "rare" and therefore probably more interesting. For example, I was able to observe a 236 Legendary relic obtained from the Command Crates. However, it is likely that Legendary grade gear is only there to differentiate between artifact grade 234/240 buildable ranks and some gear, like 236/242 Relics, which cannot be obtained other than by the command offices.

To obtain this equipment, you will no longer have to collect a coin to exchange on the ops bosses or to exchange war zone distinctions because everything will go through the command crates. You will recover these crates by increasing the level of command and, at the opening, you will have chances to obtain a part of the level corresponding to the third suitable for your level of command and your discipline. It is your discipline that counts when opening the cash registers. Thus, if you collect crates in tank specialization but want the DPS equipment, you will only have to change the discipline before opening them.

Bioware has already returned to some points with some announcements regarding upcoming system changes. Particularly in response to criticism of the randomness of the system which would block some particularly unlucky players who, for example, after several hundred levels climbed, still have not received their full set bonus. Here is the main change announced during the last livestream. 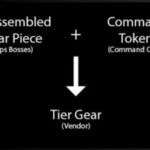 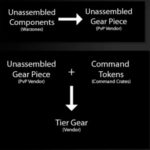 It would be possible, starting with update 5.1, to recover unassembled command parts about operations or with war zones. These parts can be associated with commandments tokens, in unspecified quantity, to exchange them for the required equipment. The two previous images are taken from the livestream of December 15 and briefly show the mechanics envisaged. However, this remains subject to change and lacks clarification as to the quantities of coins or tokens required. Likewise, it is not specified whether it will be possible to recover all the levels of equipment in this way, nor the distribution of unassembled parts in operation.