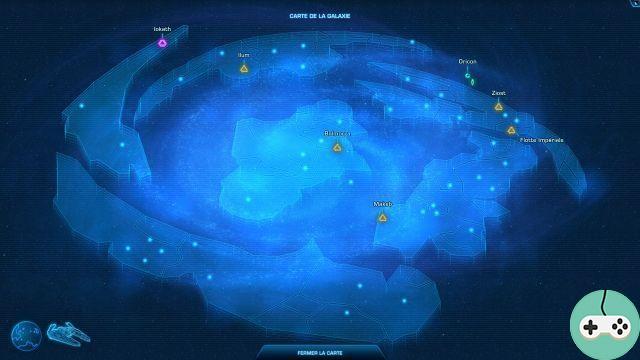 Never revisited since the launch of SWTOR, the galaxy map has undergone an overhaul. The map is more readable and above all it becomes accessible outside the ship. In addition, it has new features. 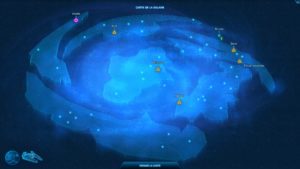 The new galaxy map is visible from wherever you are. In the mini-map interface, you will now find 4 buttons to its left, 3 to the right and a last one at the bottom of the circular display area. The buttons on the right always allow access to the management of the options of the minimap and its zoom for the two highest and the last at the bottom allows the opening of the war zone menu. The button below the minimap is a relatively recent addition and allows you to switch instances between PvE and PvP planet instances when possible. The buttons on the left have been changed. We find, from top to bottom, the group search menus, galactic hunter, the galaxy map then the world map. 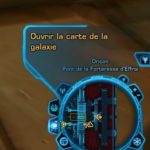 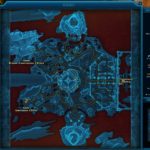 Let's start with the last one: the planet map. Tool accessible by the shortcut key M, by default, the organization of this interface has been slightly modified. We notice the addition of a new button opening the galaxy map which is added at the bottom left, under the markers of the legend. The galaxy map can also be opened by pressing the second button on the minimap, between the galactic hunter and the planet map, or by using the shortcut shift + M.

You can also of course see the map by going to your ship as it was possible for the old one.

Now let's open this revisited map and find out what new features are being made. First, we will notice a new general appearance. Let's compare the old card and the new card. 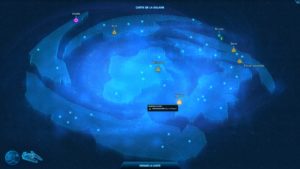 Formerly, to get to a planet, without bypassing the priority transport system or daily quest, you had to go through the map from your ship. The journey could then take several minutes, depending on the loading times specific to each one, since it was necessary to load the ship, the arrival zone on the planet and sometimes it was even necessary to move to descend on the planet. Now open the map, pay the amount due for transportation and directly load the arrival planet. We therefore save at least one load, that of the vessel. And if by any chance you want to go to your ship, the same map offers you to go there directly, by priority transport, by clicking on the button at the bottom left of the interface. It is also possible to go directly to the planet map by clicking on the button next to the previous one.

To access an area of ​​the map you had to click on it and you were then stuck on a second screen. Changing zone meant that we had to go back to the global vision and select the new one. Now it is possible to navigate as you see fit. The card, once loaded, is in one piece. It has 4 different zoom levels and each gives access to different levels of information. The most distant allows you to see the whole galaxy and the planets where the members of our group are, where we are and the planets where we have quests. The other zoom levels add information such as the detail of the area observed with the planets where there is no quest and the areas of space missions. 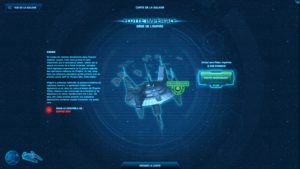 Finally, the most useful feature is transport to other planets. It works like in the old system, click on a planet and validate the payment of the transport cost to start loading the planet where you are going. The advantage is that it can now be launched from anywhere without going to your ship. Do not rely too much on this system to move a whole group, the transport system by the guild ship will be much cheaper. Finally, do not expect to reduce costs by loading your ship, the transport prices from the ground or from the cockpit are the same.