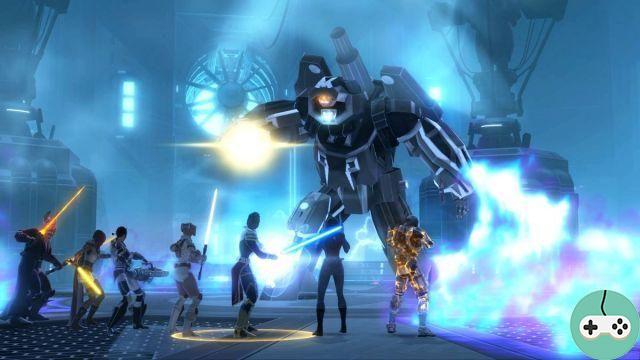 Let's resume our journey on Iokath with this third operation boss: Nahut. With a stealthy character, this boss includes a gaze mechanic that will prevent you from seeing it at certain times depending on your orientation. But don't worry, it's without counting on a candle to enlighten you. 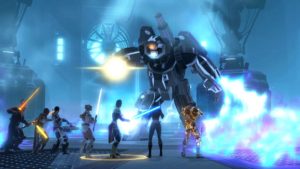 The boss starts in stealth mode and it will be necessary to play on the candle to make him reappear regularly. After that, you just have to eliminate all the small opponents around the area, then focus the boss and kill him quickly enough before it fills the room with electricity.

Some names given in this section may not correspond with the actual name displayed on a parse because you have not understood all of the matches. 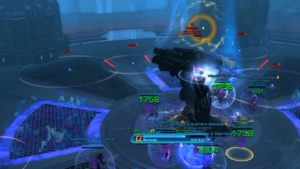 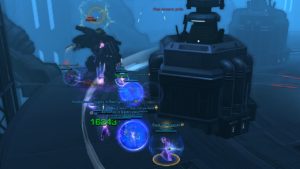 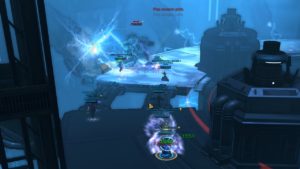 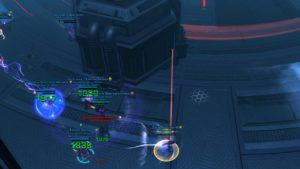 The fight starts seconds after a player picks up the candle. This will give three abilities to the player who wears it. The first allows the boss to come out of his stealth. The second and third is to put the candle down or pass it on to another player.

The room is divided into three zones. A circular central and two inner and outer rings. As shown in the diagram below. 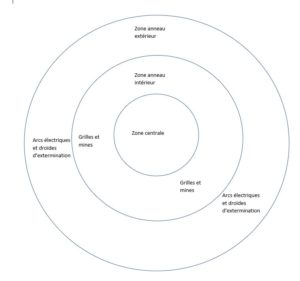 During this first phase the boss is stealthy. You will have to use the candle to make it appear. The player wearing it will see it all the time and regardless of their orientation in the room. On the other hand, the boss will only be visible for a limited time by the other members of the group. Plus, they'll only see it if they stare at it and it's not too far away. The candle will therefore allow him to be seen wherever he is for a limited time. This ability has a 15 second cooldown. It is the time after which it will be necessary to give the candle to a comrade so that it makes reappear the boss. By rotating with 3 or 4 players in one minute it will be visible to all at all times. This mechanic does not impact healers. The wearer is represented by with yellow circle under his feet. 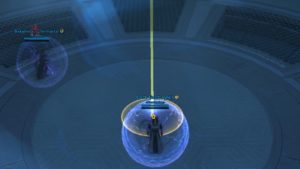 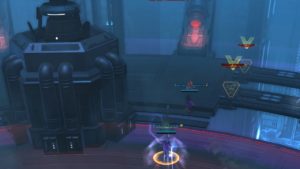 The role of the tanks will be to control the boss to maximize the damage of the dps. This is the part that requires careful placement to save as much time as possible. The combat room is circular. Place each tank at the start of the fight opposite to each other. They will then have to turn in the same direction around the room and take turns taking mines to regularly take back the boss. This mechanic is specific to tanks and other members should not set foot in these areas under any circumstances. If they do, they will take over the boss. If they get there the boss will have to go back and forth to the center of the room and never leave the central area. He will regularly rest the mines through an incantation. 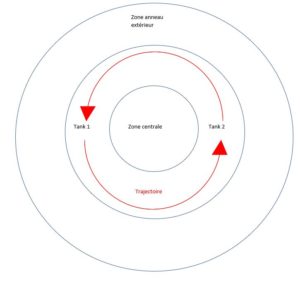 Finally, the last mechanic of this phase. Many areas of effects appear regularly. Electric circles hurt, get out as quickly as possible. At the same time, the grids will light up alternately according to their size, once the small ones and the next the big ones. Don't bump into it, the reflection doesn't work. 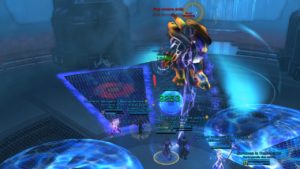 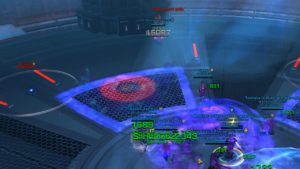 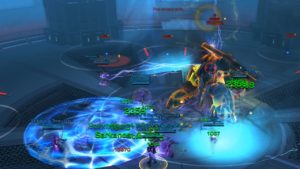 In phase 2, the boss will land in the center of the room in the central area and a damage area will land up to the edge of the inner ring. This red zone inflicts damage and you will have to get out of it and avoid returning to it, even if putting a foot in it will not be too punitive as long as you do not stay there. In addition, still at the start of the phase, the outer ring will fill three quarters with electricity. It will therefore be necessary to go, as in the images below, to the only part not yet covered.

In this area will be two turrets and two droids. Start by eliminating the turrets and then the droids. Time is limited because the area is gradually covered with electricity. The boss will not be present at this phase. The tanks will however have their role to play because they will be regularly targeted by a laser, just like the bearer of the candle. The damage of this ability is area, so it will be necessary to move away from comrades not to multiply them. In addition, the boss will start to use Gravity Shear and thus regularly attract the group to the central area. The scenery may prevent you from returning there so as not to enter the red zone. 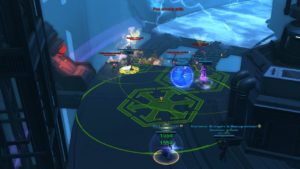 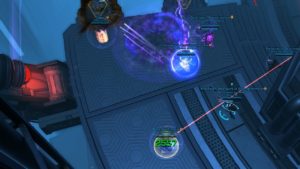 When switching to phase 3 you will notice that the area is briefly covered with electricity. If you had time to take out the droids and turrets, however, it will be harmless and disappear, otherwise you will take damage over time.

After this short phase 2, the boss will return, still in stealth mode. it will therefore be necessary to continue playing with the candle to make it appear. You will have to stay on the outer ring because the inner zone will remain dangerous. In addition, he will continue to throw his grapple inward.

The difference with phase 1 is therefore the absence of leads (nail and pins). The boss will tank in the classic way and the exterminating droids will start to appear all around the map. Move the boss to a droid and kill it taking advantage of the area damage. The frequency and number of droids spawning will increase somewhat during this phase. So there will come a time when you won't be able to deal with all the droids. Then leave one or two dps on the boss and assign the most mobile to destroy the droids.

These droids are already present in phase 2 but are content to target the bearer of the candle with the laser. Here this laser will always be present and can be interrupted with the decoration. Decor behind which it is better to stay so as not to be drawn towards the center.

After a certain time or percentage of the boss's life, phase 4 will begin. It is a timed phase. Nahut will cause small portions of electric arcs to appear under his feet, as you saw in phase 2. So you have to get out of it and kill it by turning it like a clock before it covers the whole of it. outer ring. The droids will no longer be present in this phase, and as time passes the inner red zone will expand to cover the entire room when Nahut has circled it.

It may sound obvious, but avoid falling. The exterior of the hall is riddled with holes in various places, including upon arrival. If you're not careful, you just might get screwed!

In phase 1 you do not need to leave the central area. So avoid tempting the devil under penalty of heavy penalties. Likewise, after phase 2 it is the central zone which will be dangerous and it will be necessary to stay in the zone of the outer ring to avoid taking the damage inflicted by a large red zone of effect in the center of the room. It's not normally fatal, but whatever healers don't have to put up with is okay to take.

Finally, communicate: if you don't, you won't see the boss often enough to punch him. The delay that can be taken as a result is irreparable. The transfer of the spark plug is essential in phases 1 and 3, do not forget this, and avoid placing it on electric arcs.

Like previous Operation bosses, he grants a piece of gear, command experience, decoration, and a mod to interact with him on Iokath.

Do not hesitate to share your tips and tricks for this boss, to say the least, not obvious when you discover him the first time.