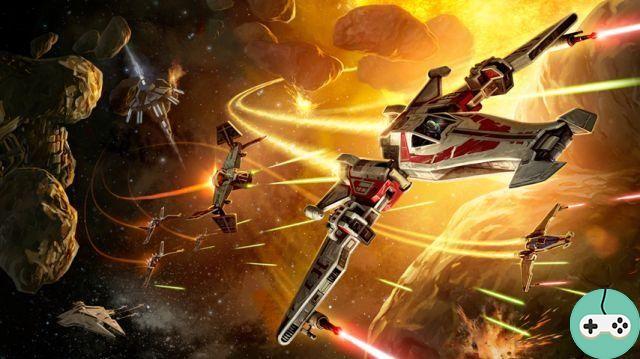 Here is a first guide to Galactic Starfighter, written by Eviad / Viandeur of the Katuor Guild on Mantle of the Force.

As this guide follows on from those written previously by Thorspark and Rankkor, I will only come back to certain points already mentioned to add a few details.

This guide aims to present the theoretical aspect of Galactic StarFighter (GS) mode by addressing players of all levels, and is based on the experience I have with GS since its inception. I'm not talking about the different armaments of each ship since it would take too long to make and indigestible to read. The purpose of this guide is therefore to help players choose for themselves the composition of their ships.

Structure of the article:

First, it is imperative to go to the "Menu" tab then "Preferences" and finally "Galactic hunter" to check "Display detailed tooltips for ship weaponry" so that you can view the combat tooltips. .

These tooltips are an effective way to present the different characteristics of your ship's weapons. You will then get this kind of information when you study them: 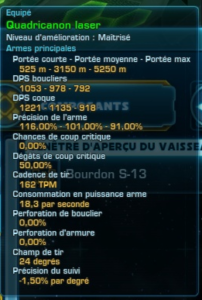 Range, Accuracy, DPS (damage inflicted per second) of Shield and Hull are each divided into 3 tiers. These stages vary according to the announced range: this means that the damage you cause and the precision with which you shoot will not be the same if you strafe an enemy at close range (level 1) or at medium / long ranges (level 2 / 3).

This principle applies to all blaster type weapons, but not to missiles; the electromagnetic guns of armed ships are an exception: their precision varies but not their damage.

You have a X% chance to critically hit a target with each successful shot. This critical hit will inflict Y% more damage (the damage of critical hits thus varies according to the damage caused in a normal situation, that is to say of the weapon employed and the distance at which you shoot.)

Rate of fire and energy consumption

We are addressing an important point here. The rate of fire represents the number of shots made if you fire continuously for one minute (TPM = shot per minute). Knowing that DPS is a variant of "damage per minute", cadence is linked to DPS; increasing your rate of fire will therefore increase the damage inflicted. The most important point remains that the weapon power consumption (yellow gauge when playing) depends on the number of shots fired, even if it is expressed in units per second. Increasing the rate of fire therefore implies an increase in weapon power consumption (useful namely in the case of the "Blaster overload" of the Flash / Drone and more in general of the Rate condenser). The choice between a damage and cadence capacitor becomes complicated: the cadence capacitor allows to inflict more than the damage capacitor, but consumes more power in parallel.

La shield piercing allows you to inflict shell damage on the enemy without having annihilated its shield: the damage "ignores" the target's shield.

La armor piercing: this is probably the most unclear point of GS. In theory, it ignores enemy armor up to X%, but in practice ... it works weird. Still, armor piercing increases damage inflicted.

Le shooting range designates the firing "cone": the maximum angular difference between the direction you take if you go in a straight line and the direction in which you shoot (position of the target in relation to you).

La tracking accuracy is the progressive loss of precision that you have by moving away from the target with respect to the axis defined by your direction assumed in a straight line. 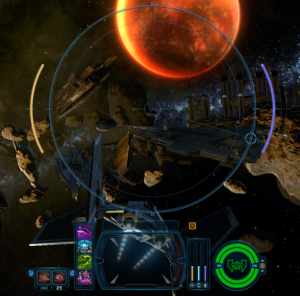 Secondary components and teammates each offer passive powers that give your ship some advantages.

For each ship, you have four secondary components available in combat. Among these four components, you have a choice of three different passive powers (except four for thrusters), which you can then upgrade (nothing extravagant, you just improve their efficiency). 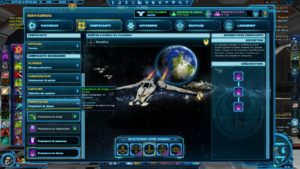 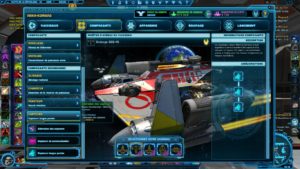 In addition, for each ship, you have four partners available in combat (one partner for each role offered), one of whom is your co-pilot. Each partner gives you two passive powers, and your co-pilot, in addition to giving you two passive powers, gives you an active power (basic: key 4 on the keyboard). You can choose your partners among the members of your crew (the crew unlocked during your class quest) as well as four other ancillary characters, but can also unlock new teammates, by purchasing them for the price of 1250 RF; they are the partners of the other playable classes of your faction. Each teammate presents a different set of powers, which allows you to make many combinations. Finally, the set of Republic and Empire side teammates is different, so you cannot always make identical crews to each other. 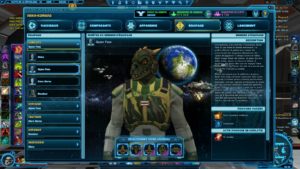 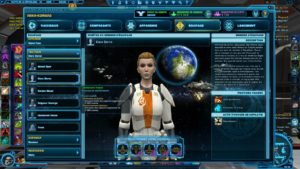 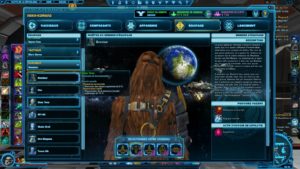 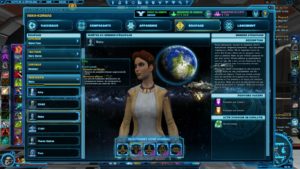 We often ignore the passive powers of his ship, since they are considered to have a minor role in the gameplay. However, they are the ones who will determine the outcome of close fights. There is only one way to determine what passive powers we would need: self-analysis during each fight, which allows us to gradually make adjustments. In short, passive secondary powers allow us to compensate for the disadvantages of the type of ship chosen or weaponry chosen, whether in attack or defense, so you have to choose them wisely. It also helps to compensate for our style of play sometimes.

Examples : Tired of being spotted by others at very long range? Take the passive teammate power "Quiet Operation" and the "Sensor Alteration" secondary component.

ACTIVE crew powers are also important, but are only really useful if you associate them with your gameplay.

Examples : the electromagnetic cannon, or missiles or torpedoes, associated with the shield perforation for all weapons by + 35% (power name: bypass)

From this information, it is easy to prepare a ship to be effective in combat. 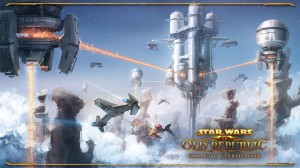 That's all for the theoretical aspect. Another guide should soon be released on the "GS combat" aspect. I would try to answer your questions / comments as much as possible (considering myself as an experienced player, I'm far from the best!).

Add a comment from SWTOR - GS: Theoretical initiation guide for the pilot