From a technical standpoint in Star Wars The Old Republic, a guild is just a friend list associated with a common chat channel.

We all know the importance that this structure can have within a mmorpg where it plays a real social role.

Missing out on this notion of the game would inevitably complicate your access to certain group activities (hotspot, operations, pvp) but above all will make you miss the point by depriving you of the community and sharing aspects that are your strength of a massively multiplayer game.

Group challenge, competition, roleplay but also mutual aid and solidarity are some of the activities that a guild will facilitate for you. 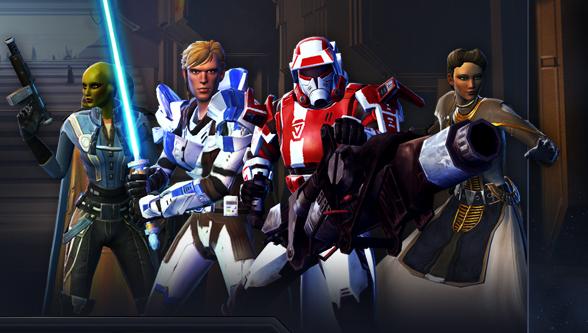 If during the launch prephase, it was possible to create a guild via the site and apply there, this is unfortunately no longer the case since the official launch (it was however a very practical and rather well designed function that could also replace an external site by giving tools and readability to all guilds). 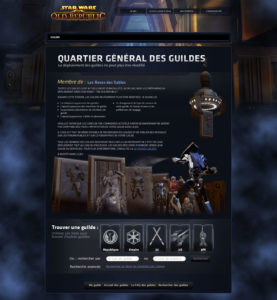 The sine qua non conditions for creating a guild are as follows:

This therefore gives you access to a few tools which constitute without exaggerating the strict minimum both in their operation and in their diversity.

As a guild master, you have access to officer notes, the modification of guild messages and the management of ranks and their attributions. The rank system has 5 ranks at the base (Guild master, officer, lieutenant, member, recruit), you can create additional ranks and define their rights (consultation of the officer channel, invitation to join the guild, expulsion, change of guild messages ...).

The tool still needs to be completed to be fully functional, the lack of direct invitation via the guild panel is sorely lacking making the constitution of a group particularly cumbersome especially when organizing operations. So much so that I had to add all the members of my guild in my friends ...

Finally you have access to the classic chat window dedicated to your guild and another to your officers.

Other features in development have been announced by the Bioware team.

The essential guild bank, which remains an important point to simplify exchange and mutual aid within a guild, is planned for patch 1.2 and in a second step, the guild ships which have been announced for a long time but whose functionalities have yet to be specified.

Many other tools not yet announced could prove useful for a guild and one can not help but think of some of those offered by the competitors of the genre. Among others, come to mind:

The possibilities are numerous and there is no doubt that each officer and guild master has his little idea of ​​another essential function that should be developed according to his MMO history (the games we play often tend to shape our vision) and its type of gameplay (pve, pve, rp ...).

Automated group search? No thanks

On the other hand, for the well-being of the guilds and probably against the grain of part of the community of Swtor, I keep my fingers crossed that we keep hot spots and operations functioning without automated group search. so that the guilds remain the privileged means of traversing them.

This kind of tool, which I knew how to appreciate in order to compensate for an overloaded agenda, clearly goes against the notion of guild by rendering some of its main qualities in vain.

By reducing the need for mutual assistance between players, it reduces the social aspect of the game and cultivates the culture of anonymous fast-instance, instead of the moment of sharing forming the foundations of a guild.