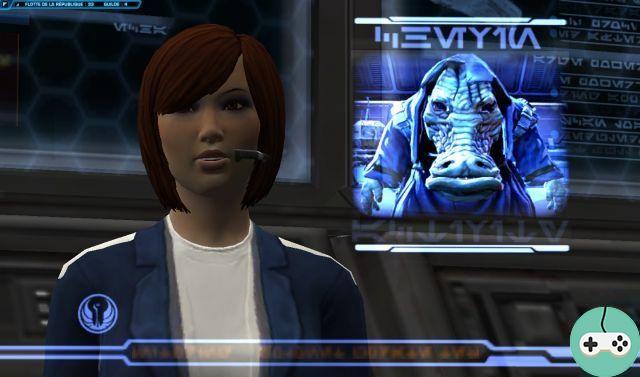 An exclusive event has just been triggered on the fleet station! The Chevin event is launched!

If anything is missing from this guide, please do not hesitate to contact us in order to make the changes as quickly as possible. Likewise if you want to send us screenshots or other information about the event!

On the fleet, an information console has appeared and broadcasts an intriguing message to interested parties: 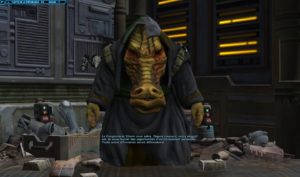 Via this newscast, we learn that the Chevins, who have always provided opportunities for personal enrichment, are launching a race for acquisitions. Any agents who would be willing to travel could be well rewarded. The Chevin conglomerate awaits these agents on Nar Shaddaa, near the promenade. A representative will be there to welcome them.

La end of the event is announced on the official forum for Tuesday 21/08. The seller will stay another week.

So let's head to the lower Nar Shaddaa promenade (once the fleet quest has been collected): 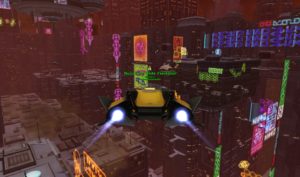 You arrive at your quest point, a hologram of representative Chevin explains the tasks entrusted to you. You have to report various elements, acquisitions:

Completing this quest brings you a mini-fart similar to Gannifari but albino (Hagnoffarl) as well as a title depending on your decision to end the quest.

On Nar Shaddaa, you can find smuggler crates that give bonus enrichment tokens but also quest objectives, Vandrayk depolarizers. Don't be discouraged by the number of crates to open, the depolarizer loot is random.

You will be able, moreover, if you have an incredible chance, to find a pet "Lobelot", also purchasable at the Chevin seller.

Here is the location of many of these crates; there are obviously a lot of other random locations on Nar Shaddaa. 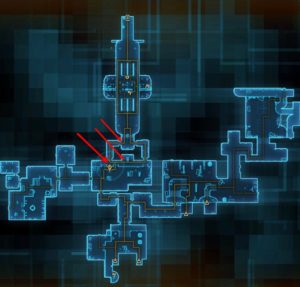 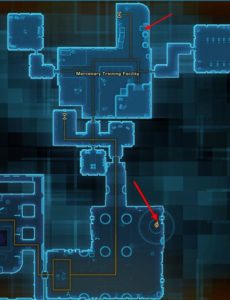 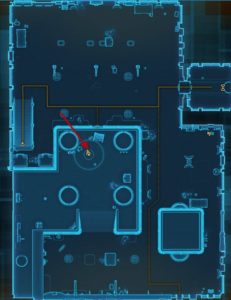 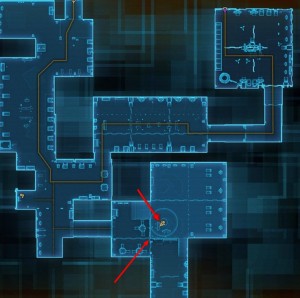 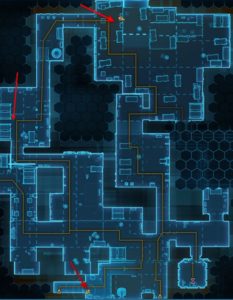 The crates have a respawn time (about 10 minutes) but it is better to keep looking for other quests, it will be faster. Really consider looking everywhere! You can find them anywhere on Nar Shaddaa ... as long as you keep your eyes open.

Crates can still be used, even if you have already completed the quest!

For the Empire, found near Camp Revanite on Dromund Kaas. 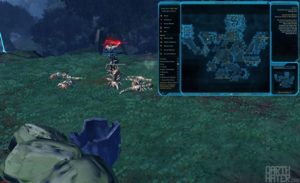 For the Republic, found on Coruscant in the Ancient Galactic Market near the Twi'lek Dancers' House. Here, on the map, you have to exit the taxi room then go down south towards the said market: 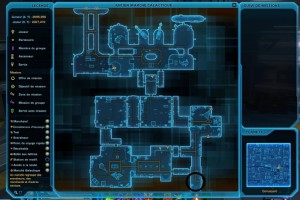 Collection of writings by Tiethiagg 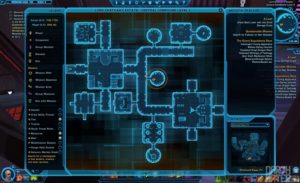 For the Republic, Tiethiagg's collection of writings can be found in the cantina of the Black Sun sector on Coruscant. You have to solve a simple little enigma based on light. I was wondering if I will explain the riddle but it's so simple you should find it on your own, it's more fun to search and it only takes a few minutes, fear not?

Here, the location of the cantina (just in case) as well as the poor dead Rhodian who launches the quest. Click on the object next to him then launch yourself into the riddle just to your right where the Twi'lek in holo-projection dances. 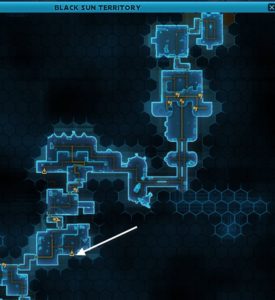 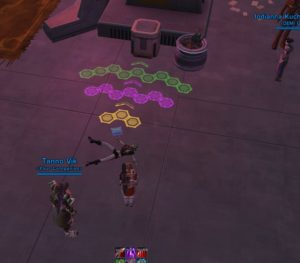 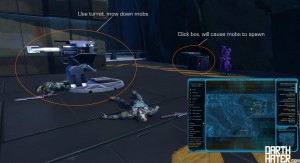 For the Republic, you have to go to the territory of the Justicars, to the south of the Coruscant map. Click on the smuggler's crate, then defeat the looters using the turret at your disposal. You can then open the crate and take the shard. 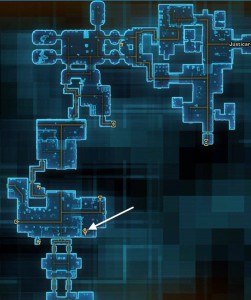 For the Empire, you will need to go to a secure container towards the Duros sector. Click on this container to get the quest but you will need three parts of the code to unlock it. Here is the location of the container and the codes to unlock this famous bass drum. Kill all the mobs that spawn and prevent you from acquiring the code. 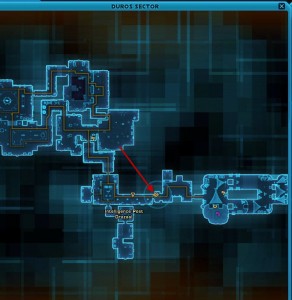 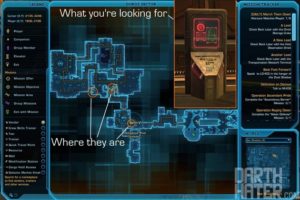 For the Republic, go to the red light district, it is also in the Duros sector. It's the Republican taxi no worries about PvP.

Here is the location of the container and the codes that open it. 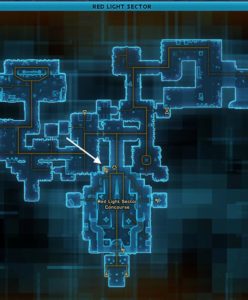 Once you have the quest, head to the markers below to get the code pieces you need. Be careful, by clicking on the terminals, mobs will spawn and you will only be able to obtain the codes when they are all defeated. 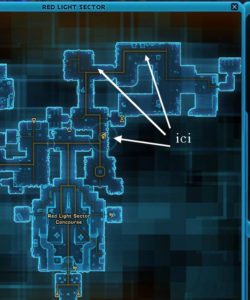 Then quickly return to the secure safe, click on it and select the 4th proposition: YLAKF REICO BGMAS

This one is pretty easy to get, all you need to do is follow the dots once in the Network Security District. Take a good look at each cutscene! Most players pass them and find themselves all stupid without knowing where to go. 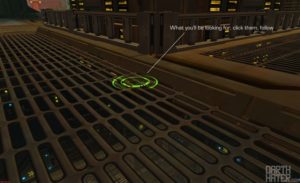 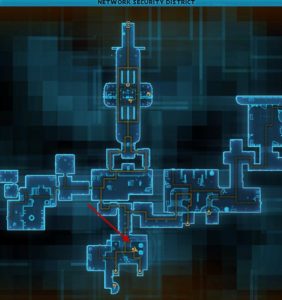 For the Republic, go to the lower industrial sector then direction the elevator east of Systech! Once in front of the elevator, select "high security prison"; then go north to the Network Security District. The sequel is similar to Empire, resume at point 4.

I don't like spoiler too much, let's respect the work of the developers and follow the quest with their clues!

To help you out a bit, make the same moves as the bounty hunter. If he jumps a barrier, jump. If he goes up a ramp, go up. If he is observing you from a high point, look around and find out how to get up there. The only thing that might be a problem is after the first point of interest. Follow the hunter and go forward until you meet, a little ahead on your right, a group of non-player characters (NPC). The second point of interest is next to them. Then follow the cutscenes.

I received a letter telling me that SIS Agent Reeho detected a target wearing Akar Kesh's meditation mask thanks to a sniffer droid. This person is said to be on Coruscant, but it is not clear where exactly. We would just need to recover this droid and use the codes attached to this message. The droid will then take care of tracking down our target. For the Empire, your contact will be Gyden Kall.

For the Republic: So let's go to the Coruscant Factory. The rest of the quest is guided IG, good hunting! ?

For the Empire: Direction Dromund Kaas, development district. Then head to your quest point where you will find a droid that leads you to the place where the mask is hidden (1205, 418).

Reeho from SIS (or Gyden Kall) contacted me again by mail to let me know that he has another lead concerning the black and orange sphere ... Problem, this sphere is in the hands of Sapaaga the Hutt.

We have to meet him in order to make him an offer.

Find the Hutt Observation Droid on the lower Nar Shaddaa promenade and follow the quest. This is a droid race.

Trick : I advise you to go to phase 2 if there are too many people in phase 1 of Nar Shaddaa. It will take you much less time.

And that infamous sealed plasma pot would be in Nar Shaddaa's very infrastructure. Reeho sent a hacking droid to investigate. Find the Transportation Network Terminal in Shadow City and follow the quest. Personally, it worked by jumping into the void so don't hesitate!

Hint: No worries if you don't have the quests, they will be doable and rewarded anyway. The quests are only clues to find the location of the event.

For those who no longer have the quest due to the known bug (Republic), here is the procedure: go to the city of the shadows to the location of this screen (2521, -1547): 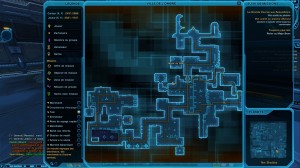 A side quest of the race is a mysterious touch that will cause you to find a holoterminal in your respective faction's cantina (capital planet, not the fleet.). To start this quest, look in your mailbox, you should have a message from the Chevin conglomerate.

After hearing the mysterious message from the mysterious contact (Hehe), you should now have a new quest line called "Questionable Patterns". This questline asks you to put down listening devices and do these different things:

You must therefore put the listening devices in this camp, at the entrance to Dromund Kaas. There you will find a holocom that you can use to advance the quest.

Head back to Nar Shaddaa to meet your contact, Fallaxen ... I mean, kill him! 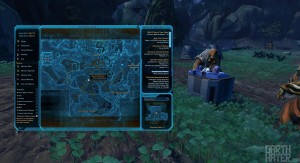 After defeating Fallaxen, turn in the quest and continue.

Now that you've managed to make your way through all of this, head over to the Nar Shaddaa casino area for the next task. For this you will need to activate the ventilation system and turn on the exhaust vent which will propel you to your goal. 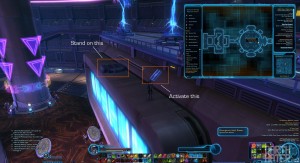 After completing all of this, you will receive 40 enrichment tokens as well as some credits.

Go to Senate Square on Coruscant, you will have to put a listening system near 3 Chevins who talk to each other. To do this, get their attention by sabotaging the phone booth just behind. It'll make enough noise for them to turn their heads and go see what's going on. The rest of the quest is identical to that of the Empire just above; meet at the casino area on Nar Shaddaa. and follow the quest. A screen of the escape event to activate is located just above, in the explanation of the Empire.

After completing all of this, you will receive 40 enrichment tokens as well as some credits. 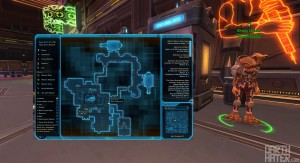 
Do you want to be up to date and know all the tricks for your video games? In gamesmanagers.com we enjoy playing as much as you do and for that reason we offer you the best tricks, secrets or tips for you to play non-stop. We offer you quality content and always updated to keep you up to date. That's why, in our website, you will find not only videogame guides but also tricks, secrets and thousands of tips so you can play to the limit. Are you ready to get it? Enter now and enjoy your videogame!
FFXIV - L'Aire ❯

SWTOR - The Hero of Arkania