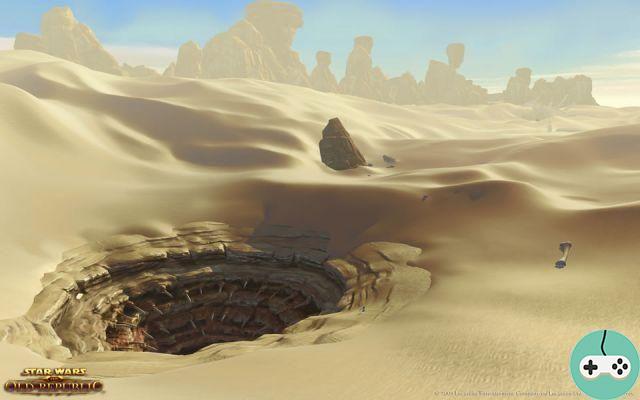 Sith Lord Draganthyr gazed at the expanse of sand and grimaced. But where had that rescue capsule taken him when he said he was coming out?

The Arkanis sector is located in the Outer Rim. There is a planet covered with 99% sand. Most people think this is because it orbits two twin suns, named Tatoo I and Tatoo II. But the natives, whatever their species, have another version. In the past, their planet was covered with seas and oceans. Until visitors from outer space arrived. Some specialists who have looked into the question consider that they were the Rakatas, and that the conquest took place at the same time as the creation of the Jedi Order, towards the end of the Infinite Empire. Why and how would they have transformed the planet into this infinite desert? Nobody knows. And since then, we have to deal with the climatic conditions of Tatooïne. 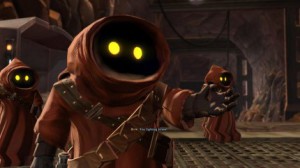 The first of the local species is the jawas. Their adult height is 1 meter. The largest reach 1.50 m, but they are very rare. Dressed in a brown hooded dress, under which only two golden eyes can be seen in their faces. They don't appear particularly spoiled in the survival arena, so they've developed handyman skills to adapt to any situation. The arrival of foreigners was very profitable for them, they quickly understood what wealth they could derive from trade. Thus, their tribes now move in large sand chariots, scouring the desert for coins they could exchange. Their defenses have increased considerably. In their junk yard, we note more particularly droids, which they have learned to repair in order to sell them better. Which certainly makes them the best mechanics on the planet. However, they remain fairly secret about their privacy. As a result, even those around them do not understand them very well, and underestimate their value. 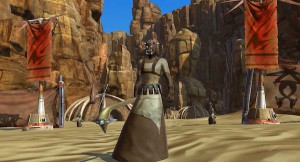 The main threat that the jawas once had to face were the tuskens, humanoids covered in bandages and measuring between 1.80 and 1.90 m. They were the dominant species on the planet, and they have no intention of giving up their position without a fight. Since the arrival of the intruders, they have been carrying out raids against them. Less well equipped with their gaffi or gaderffii sticks, a traditional weapon whose manufacture is part of a ritual in adulthood, they abandoned the larger targets to concentrate on the most isolated while waiting to find a better opportunity. . As a result, they are also called Tuskens plunderers. They acquired various blasters to improve their equipment, as well as some mines and defense turrets. Three centuries ago, the Jedi Revan made a deal that loosened the noose around the city of Anachore. But it was one tribe, and that was three centuries ago. In the wilderness, tuskens can be tracked by seeing them move around with their banthas, animals with whom their warriors have a near-symbiotic relationship. Finally, let us add that there are not only tuskens under their bands. Sometimes they keep their prisoners and they or their children end up joining them. On the other hand, we do not know of any example of a mixed couple which would have borne fruit and continued the lineage of these newcomers. 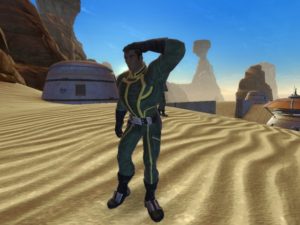 Tatooine was discovered in 547 before the Treaty of Coruscant. Its name comes from a phonetic distortion of that given to it by the jawas. The first settlements were large enough for the planet to have a representative in the Senate of the Republic. But during the Great Sith War, the Jedi who held this role died in battle and was not replaced. And already, the first limits of the local ecosystem discouraged new waves of colonization. Seeing possibilities to plant mines, the Czerka recovered land. Becoming the main ruler of the planet, the company removed it from the scope of the Republic. But the gains recovered were not worth the risks incurred with the Tusken raids. Tatooine was abandoned to the Special Military Research Division, and then even it eventually left. This is why the Empire decided to seize the Mos Ila outpost, in search of these abandoned secret laboratories. And as imperial intervention on a neutral planet cannot be left unattended by the Republic, the planet has recently seen a new wave of settlers. But beware, the Czerka's negligence also allowed many smugglers and other criminals to come and establish strong bases far from the official zones of influence of the Republic and the Empire. And the Hut Cartel could also decide to buy a share of this officially independent domain.

Note that the towns of Mos Eisley and Mos Espa, which appear in the films, did not yet exist at the time of TOR.

add a comment from SWTOR - In the Tatooine Desert