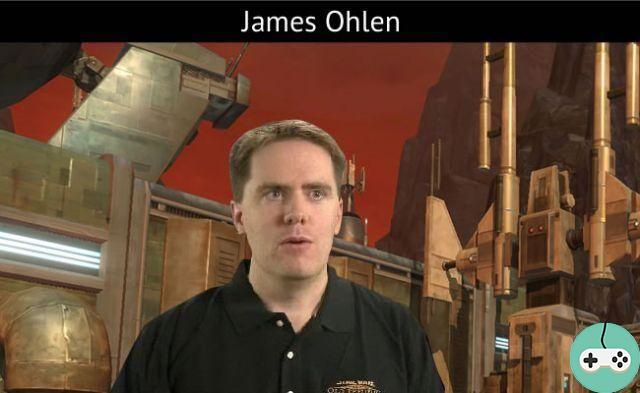 The Gamasutra site published a new Interview with James Ohlen this morning. You can view it here.

It's a very ambitious MMO, there are a lot of parts. At this point in the development process, what are you paying attention to?

The smoothing (polishing) of the game system, tutorials and learning for new players. So, we are introducing systems that do. We are also focused on making sure that our technologies are stable, that we will have a very stable launch.

An MMO is different from any other game because you have this whole huge online community all around the world, connected at the same time, and you have to make sure that your game cannot be hacked. You must have very strong security measures, your game must be able to withstand if there are hundreds of people in one area at the same time. There are a lot of things we've never had to worry about at BioWare before.

Due to the hype surrounding the game right now, the numbers for the release are predicting something huge, which means we have to be ready for the biggest online launch in history, which is very difficult. We've put in a lot of testing, just to make sure it goes well at launch.

We also focus on balancing the game for fights, for gear, for social systems. We've put in a lot of testing, we get a lot of feedback on the game. And when we have feedback, we use it to make tweaks and changes. We're not making major changes now, we're just making minor changes that we can. Every game of BioWare goes through this process or any game in general.

One of the secrets to making a "90s Metacritic" game is to really keep smoothing the game all the way through to the end. You need to do a targeted launch because if you go crazy with comments and change major systems then you don't have time for preening anymore. You have to choose what you are going to change based on player feedback, both external and internal.

As much as the smoothing, what particularly struck and interested me in this project is that it is fully vocalized. Traditionally an MMO can be iterated easily because they don't have to worry about having to re-record dialogue as it's text only. Is this a challenge?

This is something we must have been aware of, and it was as early as 2006. We knew it was something we should be worried about and when you are doing game balancing for quests you really have to be aware of that. So if an NPC tells you "You have to assassinate this guy", you can change what happens until the moment you hit him.

If we have feedback that the current mission flow is not intuitive or a lot of fun, we can change the way the mission unfolds. But the conversation at the beginning, when you are told to go kill him? This must not change. Finally, most of the comments are around the activity you were sent to do.

Another aspect of MMOs that is interesting for development is the way it is constantly expanding and evolving. This is another big challenge with all these voices of actors. Is it something that is planned in advance? Are you going to be collecting all of those vocals in the studio next month?

The most important actors to keep are those who give voice to player characters because you wouldn't want your voice changing. But that's something we have to be prepared for, that's one of the challenges. We have sixteen different character voices which are probably the ones we'll be using over and over again.

Is this the first beta test of an MMO you are a part of?

Well, even though we don't really call it that, I guess it's kind of a closed beta. Yes, this is the first time that I have been involved in testing an MMO.

Were there any big surprises once people actually played the game? This is a very different feedback process than testing for a single player game.

It's important to get people to test your game, but beta testing is more about finding out if your technology is going to work and finding some small tweaks and changes. But all of the big changes we made were planned long before, because we played the game ourselves. If we couldn't figure out this stuff, we'd be bad game designers. So from the start internally, we figured out a lot of the issues.

But at the same time, it's good for the fans to feel useful and sometimes they are. Sometimes they notice things that are a little surprising but nothing too big. There were surprises about the project, but most of it came from our internal testing sessions.

Did you find that the development process followed a plan traditional for BioWare? Or did you really have to adapt?

It is very different. Most of the BioWare games that are new are put together on the home stretch, four months before or something like that. Usually it looks like a train disaster. When you show it to producers or editors, it's "Oh my god, how is this game going to be put together?" And then it comes out, and it's a "90 Metacritic" game. But this game was not the same, it was actually very good and playable very early on.

Yes. And it was very different for me. Most of BioWare's games aren't really fun until five or six months after release.

When you go back to the office now, as the project manager, what do you do?

There are a lot of different things. There are obviously the post-launch things that I have to work on, because all of this content has to start very early in the process. I look at all the comments that come in. I play the game a lot now. A typical task is to sift through all the feedback I receive, both internal and external sources, and figure out what to do with it. I want to make sure that I play the game a lot so that I don't just take the words like that but as a part of the game that needs fixing.

It's kind of a BioWare philosophy. Even the two chefs, Ray [Muzyka] and Greg [Zeschuk, founder of BioWare], have always played our games and that allows them to say that they have actually played the game, and they can say yes, I'm from. okay it's boring or it doesn't work or whatever. That's what I have to do as well, to make sure I'm on top of the game. It's kind of a challenge, with the hundreds of hours of play and the eight different classes with so many different activities. .

One difference between RPGs and other types of games is that RPGs have so many different systems. If you think of a first person shooter game, this kind of games is very simplified. You have a mechanism: you shoot things. But in an RPG you have a lot more mechanics.

One thing I learned personally is that I had to get involved a lot more than in the previous games I worked on, I had to be a lot more structured.

I was going to ask! It seems like BioWare's philosophy is that everyone should be on top of the game, but it seems like you need to spread yourself a little less in an MMO and learn to delegate.

Yes. I must trust my lieutenants. I have senior designers below me and classically my management style now is to give my guys free rein as long as they think they do the way I want them to do, I don't get involved. not. Even though I don't totally agree with something. There is no way for one person to control a project of this size. And the point is, there are elements of projects that I'm not going to be well informed about.

For example, Gabe Amatangelo is the guy who runs the war zones and operations, our PVP, and he has a lot of experience with that, coming from Warhammer. I don't have that experience, so I'm giving him a lot of freedom on that point. Our lead author Daniel Erickson also has a lot of freedom. He's a writer, not me.

Add a comment from SWTOR - James Ohlen on leading the project