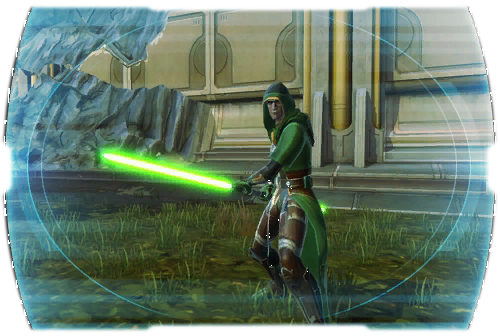 Those of you who have already reached Corellia will have noticed the presence of certain lightsaber wielders known as the Green Jedi. Some quests even learn that this group has some independence from the Jedi Council of Coruscant. Their codex entrance can be found in the garden of their enclave, east of the commercial area (south of the last area on the planet, half devoted to the quests of the Empire).

The Green Jedi are interesting because they're one of the few references in TOR that isn't the movies or something that happened before the period. The foundation stone for this organization was laid by Michael Stackpole in the X-Wing novel series (1996-1997), creating a last surviving character of a Jedi dynasty. Nothing extraordinary so far, Luke was looking for descendants of Jedi to rebuild the Order. But two years later, George Lucas released The Phantom Menace and made new rules. Among them, no Jedi dynasties. The Extended Universe is doing it by saying that these rules were more or less followed according to the times. But Michael Stackpole insists. Corran Horn is Corellian, Corellians are used to not behaving like everyone else, so Corellian Jedi are not like other Jedi. Thus was born this organization. But ever since Michael Stackpole left the Star Wars universe, that creation has been in decline. It is recognized but does not develop as a result of the films. And for the days of the Clone Wars, she has fallen into line to the point that the Corellian Jedi are hiding their differences. By renaming them somewhat, TOR allows us to meet them for the first time when they were powerful and numerous. 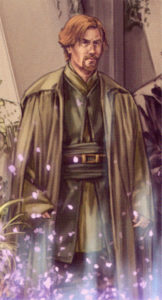 Why the name of green Jedi? Because of the color of their clothes which is green and black. These are the same colors as the CorSec (but the CorSec uniforms are orange and gray, and were already so under Michael Stackpole).

Green Jedi are gray Jedi. Many believe this name has to do with alignment, but no. The Gray Jedi are just unique in not recognizing the Jedi Council as absolute wisdom and the embodiment of the Light Side. They are more or less independent depending on the individual. The two greatest examples of the Gray Jedi are Jolee Bindo (KOTOR) who considers having left the Order and Qui-Gon Jinn. The prelogy only announces that it recognizes twenty Jedi who have left the Order, without taking into account the exiles and the Sith. Jolee Bindo is not among the number. The Gray Jedi are therefore viewed by the majority of the Order as mere deviants having difficulty with authority.

The Green Jedi are therefore an organization of Jedi, part of the Order but questioning their authority and refusing to obey certain orders. And powerful and numerous enough to force the Council to negotiate with them rather than trying to force them. 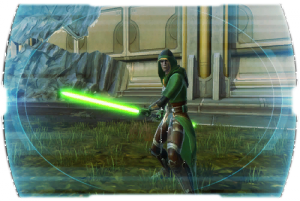 The Corellians are reputed to be independentists. Let it be the governing bodies who like to take a certain distance from their political superiors in the Republic. Or the lower castes who have problems with authority and the law, supplying a large number of smugglers. The number one reason for the existence of the Green Jedi can be found in their original name: they are the Jedi of Corellia. Then after the Corellian sector (Drall, Accordingia, Talus and Tralus). And finally, eventually, if the situation is serious enough to require it, they may meddle in the affairs of the Republic.

Many viewed the Jedi enclave of Coruscant as an ivory tower, from which its occupants emerge only occasionally and sparingly. Tython's new temple follows the same principles, living in a very self-sufficient way. The Green Jedi want to be much closer to the people. It is not uncommon to see them walking around with members of the CorSec (hence the colors) for vulgar police operations. They have the right to marry, and parents can educate their children themselves. When one of them sees their status change in the hierarchy, it is common to strike several commemorative medals (called jedcred in slang) offered to family and friends. In short, the Green Jedi shine by cultivating the bonds frowned upon and even disapproved of by the Jedi Council.

You don't have to be born on Corellia, or even the Corellian Sector, to be part of the Green Jedi. Any foreigner, even non-human, can join them if they agree to abide by the more liberal rules in force. This does not mean that he is forced to start a family if he does not want to, but he must tolerate the differences of his new companions. His only major obligation is to favor his new homeland over the rest of the Republic. 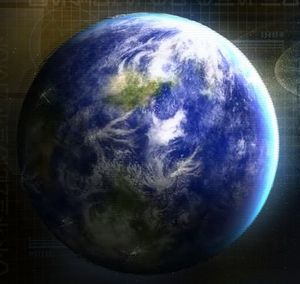 At the time of the war between the Galactic Republic and the Second Sith Empire, the Green Jedi remain neutral. Corellia is absolutely not threatened, they have no reason to listen to the calls of Tython's Jedi Council.

Things obviously change when the Empire launches a raid on Corellia. Led by their leader Arfan Ramos, the Green Jedi find themselves at the forefront of the conflict. While waiting for reinforcements from the Republic, they even become the main resistance force. Their enclave is the only official base not captured when the counterattack troops arrive. But here again, tensions arise with the forces of Coruscant and Tython. The goal is the same, of course. But the means to achieve this remain elements of tension. We must move forward carefully so that the Green Jedi do not become a collateral victim of the war ...