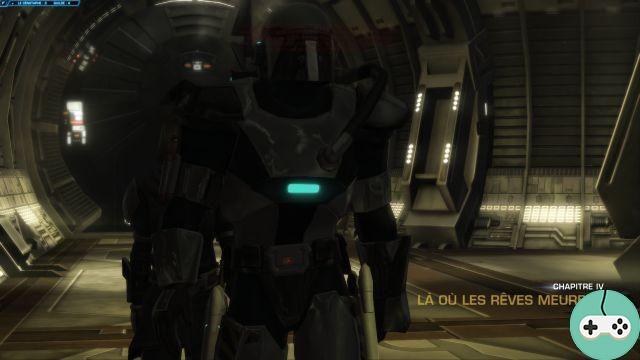 Scorpion played finely and manipulated us. The Cenotaph is out of control and heading for an unknown region. On the spot, we notice that the entire Eternal Fleet surrounds us, but without being aggressive. And luckily for us, because Vaylin and his troops sabotaged the ship. We set off with Theron to repair the omnichannel while Lana and the rest of the crew repair vital systems. 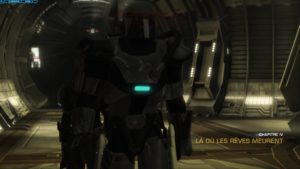 By doing so, Vaylin takes possession of the cockpit. We then notice that the ship is drawn and heads towards a huge structure. We try to contact the others, but it's Vaylin who answers. She wishes to reach us by killing someone within her reach. We are trying to take advantage of its conditioning, but we are too far away. We rush to the bridge to stop it when a light blinds us. 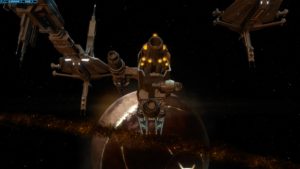 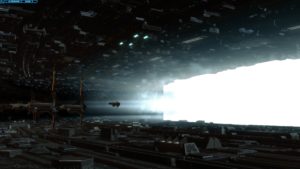 We wake up on the new planet: Iokath. Communication seems impossible with Lana, Theron and the others. A small droid arrives as we prepare to leave. Not being aggressive, he becomes our partner and will accompany us in the search for our companions. While doing this, we notice that some maintenance droids are attempting to suppress the plants with flamethrowers. Oddly, they are very weak and die instantly upon touching them, except for droids labeled "strong". 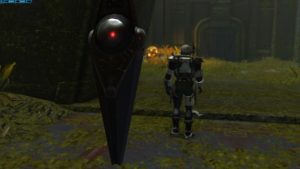 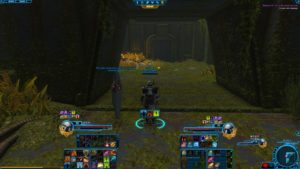 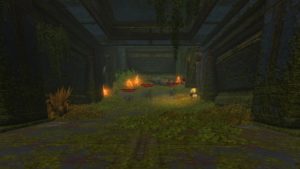 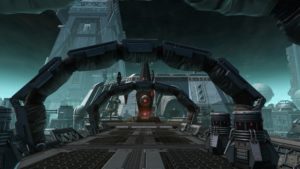 Going forward, we come to a console called technolythe. It gives access to what appears to be artificial intelligence, ARIES, advanced, but failing. Thorian interrupts us and explains that the same thing happened to them. A blinding light surprised them before they found themselves on Iokath. We leave the terminal to the sound of gunfire between Knights of Zakuul and search droids. Their clash allows us to take them by surprise before being joined by Theron. He seems to have found an area where contact is possible. Also, the place he shows us seems safe and so we will join him as he tries to spot the others. 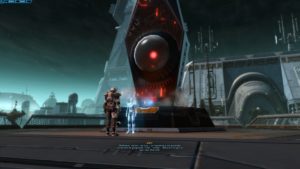 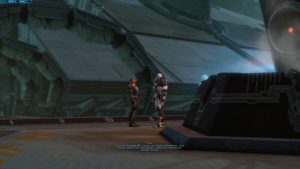 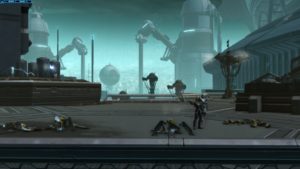 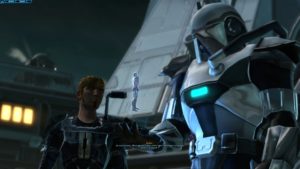 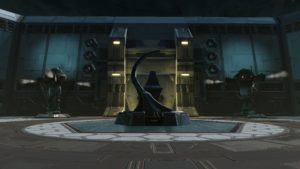 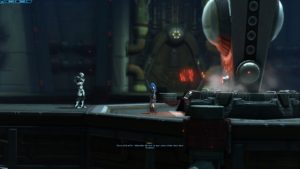 By the time to arrive, everyone is there, but Theron cannot locate the Cenotaph. Vette, however, seems particularly enthusiastic about the discovery of another technolythe which is much more functional than the first. We learn that Scorpion, the Eternal Fleet and the Cenotaph are weapons created by the designers of this world. They were originally created to serve as tests in "war games". The impacted planet was then compensated in repair when possible. Vette asks which planets were chosen. In total, nearly 70 planets have been invested. 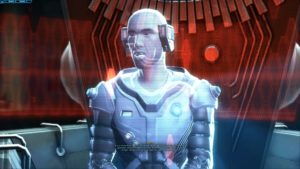 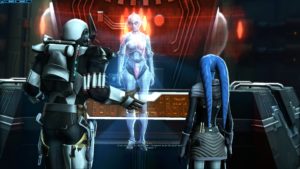 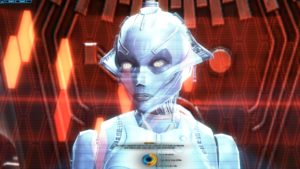 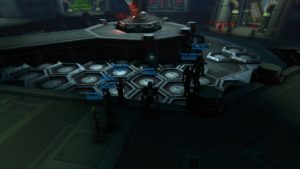 We are then interrupted by interference, caused by Scorpio appearing. She has taken control of a data block and tells us that we are in danger. She wants us to join forces to escape. We are again interrupted by Purification Droids but, with an army of partners by our side, that shouldn't be a problem, although the number of Droids may hinder progress. Remember to dispel the afflictions they pose as quickly as possible and interrupt them with whatever you can (area spells and other incapacitators). We can also move away to increase the time between the droids appearing and when they take over from their dead comrades, allowing the partner to hold us. Also remember to check that the partner in question is at level 50 and absolutely do not exit the phase at this time, Vette can no longer be summoned if you return later. [It happened to me and I had to start the chapter over and reset it ...] 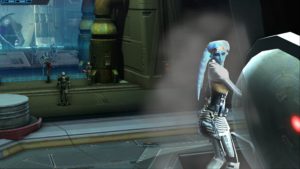 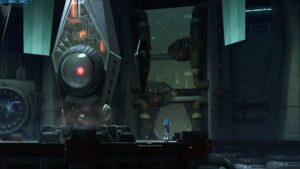 After passing this first difficulty, Theron protects us by activating a shield, blocking our opponents, but also our only way out. It was then that Vette, who was manipulating the technolythe to try to reactivate ARIES, opens a hidden door for us. Unless it's Scorpio helping us. In any case, we are forced to move forward and come across another technolythe. Scorpio can then contact us again. 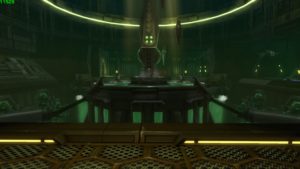 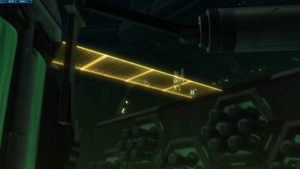 She teaches us that the stasis cells below are those of its creators. There are billions of them, but they are all dead. However, it is now able to have access to more information. The droids rose up against their creators to end the war, but the latter banned them, hence the lack of memories. His memory has been manipulated and partially blocked. Unfortunately for us, his curiosity propelled us to Iokath where the droids still seem to have taken control, and we are trapped on Iokath.


Do you want to be up to date and know all the tricks for your video games? In gamesmanagers.com we enjoy playing as much as you do and for that reason we offer you the best tricks, secrets or tips for you to play non-stop. We offer you quality content and always updated to keep you up to date. That's why, in our website, you will find not only videogame guides but also tricks, secrets and thousands of tips so you can play to the limit. Are you ready to get it? Enter now and enjoy your videogame!
ESO - Conception; Molag Bal ❯

Add a comment from SWTOR - KOTET in master mode # 4