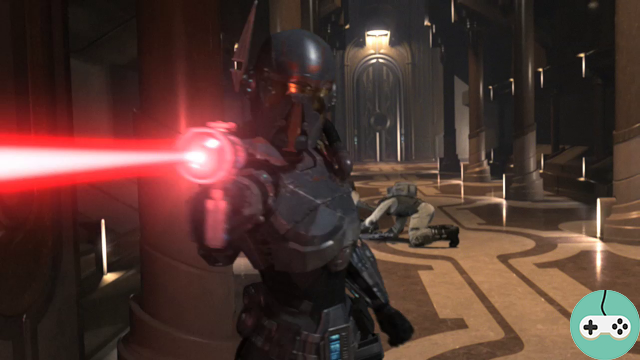 During the Sack of Coruscant by Imperial troops, a small Sith unit attacked and destroyed the Jedi Temple. Almost all wore regulatory armor which made them anonymous. On the videos of the fights, only three members of the group are really identifiable: their leader Darth Malgus, his slave Twi'lek Eleena and the Mandalorian Shae Vizla. The latter's participation in this battle was a feat of arms such that it made her one of the most famous warriors of the galaxy, if not the most famous, in front of galactic luminaries such as the two Mandalores.

Born into the Mandalorian clans, Shae Vizla grew up while they were still separated and scattered. As soon as she was old enough, her parents and relatives took her with them when they went on certain missions. The Vizla clan worked as mercenaries and bounty hunters. It is therefore natural that once an adult, she embraced the same path. She started to carve out a little reputation for herself, but not on her own. She then teamed up with her brother, a very close and inseparable duo. But that was before the war between Empire and Republic began, before a new Mandalore emerged to bring the clans together into the Sith fold. 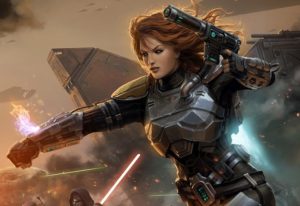 The new Mandalore the Little did not have much to do with Shae Vizla and his family: an orphan gladiator, he was only linked to the Mandalorians through his father's blood and information given to him by the Imperial Secret Service. But he had established himself as Mandalore, and he had all the symbols of power. The Mandalorians had to follow it, it's part of the Resol'nare, the six rules that define them. The Vizla clan, like the others, complied with his directives. Shae continued to climb the hierarchy, commanding units on the battlefield and dealing directly with the Sith generals. This is how she distinguished herself during the Battle of Alderaan alongside the troops of Darth Malgus, a dark lord with whom she cooperated on several occasions until the end of the conflict. 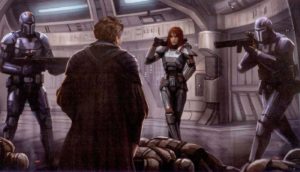 Eleven years before the Treaty of Coruscant, as she commanded the boarding of a political transport from the Republic, Jedi Master Aurei Eadon, who was a bodyguard, shot down her brother. She wanted revenge in a duel, but the other refused and managed to escape. For the Mandalorian, the war had taken a personal turn and she became one of the commanders of the most enraged clans. This quest for revenge culminated in the Coruscant Bag. Charged by Dark Malgus to deactivate the defenses of the Jedi Temple, she infiltrated the building. On her own, she manages to prevent reinforcements from joining the fray before it's too late. She manages to find Aurei Eadon and be the one to eliminate him. His brother was finally avenged. 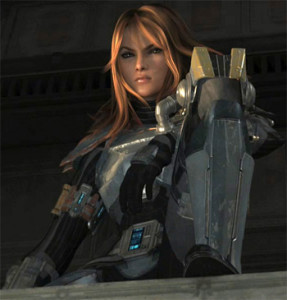 The Sack of Coruscant gave the Empire control over the drafting of the Treaty of Coruscant. The Great Galactic War was followed by the Cold War, a situation of precarious peace. For the Mandalorians, it was also the beginning of great maneuvers. The Crusader Schism denounced Mandalore the Little's Sith alliance. This one was challenged by a competitor. Defeated and executed, he was replaced by his victor who thus became Mandalore the Innocent. The new leader ended the civil war against the Schism and waited for the resumption of the war which will inevitably come to pass. Several clans took advantage of the respite to strengthen ties with the Sith and Imperial officers with whom they had worked in recent years. What about Shae Vizla? Well, she has been discreet, keeping away from the major movements of both camps. 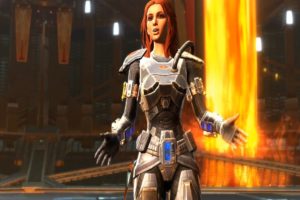 During the decade following the Treaty of Coruscant, Shae Vizla took over the leadership of his clan. This one has settled on Rishi where she seeks to make hers stronger than ever. Thanks to the reputation she gained alongside Darth Malgus, she became a living legend to the Mandalorians. She no longer needs to work. What she is looking for now is a new challenge to match what she has already experienced. Despite the qualities the last two Mandalores found in the Empire, she finds that the Imperials pay too poorly. Unlike the members of the Schism, it does not take its neutral position out of ideology. She just feels that in order to stay who they are, Mandalorians should only choose their allies on a case-by-case basis, and when they get in the way, like Rishi's Blade Nova pirates, you have to know how to abandon them in order to survive.