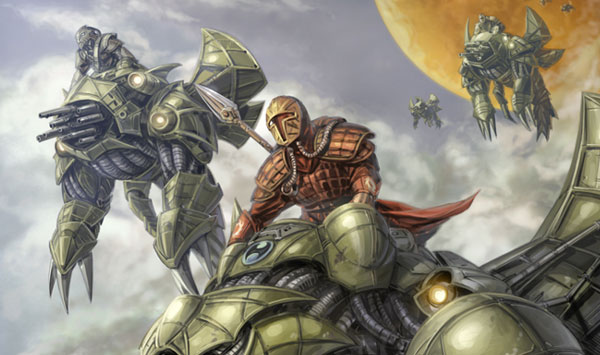 If you ever hear the first words of this song, I advise you to move away. It is called the Vode an, which means Brothers us. It is a traditional Mandalorian field, generally used before going into battle. The last lines sometimes even serve as a battle cry. So unless you dream of competing against the famed best warriors in the galaxy, I advise you to step back and let them pass. 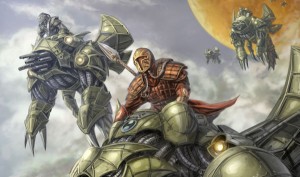 Who are the Mandalorians? They appeared on the great galactic stage over three hundred years ago. At the time under the command of Mandalore the Indomitable, one of the greatest leaders in their history, they began to expand into the systems bordering the Republic, straddling their Basilisk droids. They sank down to the Core systems, to the Teta Empire. Only they came up against a government corrupted by followers of the Dark side, and preparing for a war against the Republic. Ulic Qel-Droma, a fallen Jedi knight recognized as an apprentice of the Sith Lord by the ghosts of the ancient Sith lords, challenged Mandalore to a duel where the victor would win all. He won and trained the Mandalorian Crusaders in the army of his master Exar Kun. Mandalore proved to be a valuable ally for the heirs of the ancient Sith lords, especially during the raid on Coruscant itself. But his army paid for the defeat of their allies in the Great Sith War. During an attack on Onderon, Mandalore was killed by ferocious moon beasts Dxun.

The Emperor decided to take the opportunity and sent agents to Mandalore's successor. They corrupted him and made a puppet of him that their master could use to study the defenses of the Republic. The Jedi Council refused to act in this war, and only a handful of knights intervened in the Mandalorian War. The press nicknamed them the Revanchists, and their leader took the name of Revan. This one manages to be tougher than his adversaries, ready to sacrifice part of his army to win a battle. Which he did to Malachor V, after defeating Mandalore the Ultimate in a duel. He grabbed his defeated opponent's helmet and hid it. The loss of this symbol demoralized the neo-crusaders. Most accepted the draconian conditions imposed on them. Only a small handful wanted to continue the fight. While pursuing them, Revan and his apprentice Malak stumbled upon the Empire. Corrupted by the Emperor, they returned to resume the clan mission in the Second Sith War.

Brought to light by the Jedi, Revan set out again to war against the Empire, alone. But before disappearing, he returned the mask of Mandalore to a former neo-crusader and mercenary who took the name of Mandalore the Savior. He strove to reunite the clans, reform them to aid the Republic in the next war against the Empire. But too few of his people accepted his new philosophy and refused to follow him. Three hundred years later, his failure to unite the clans and make them allies of the Republic is glaring. 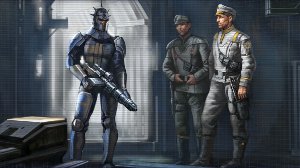 When the Empire launched its first offensives against the Republic, the Secret Service contacted a Geonosian gladiator with the intention of making him the new Mandalore. Once crowned, he used an ancient Mandalorian tradition called the Great Hunt to reunite the clans. The winner then challenged him to a duel and killed him. Mandalore the Short is over, we are now under the reign of Mandalore the Innocent.

Although not a puppet of the Imperial Secret Service, the new Mandalore remains an ally of the Empire. An ally who cultivates a certain independence and monetizes the services of his men. But he secured his post by eliminating those who claimed to follow the path of Mandalore the Savior. He is therefore clearly not a friend of the Republic. Since the signing of the Treaty of Coruscant, he seems to be dividing his time between his base in Geonosis and visits to space. He orders the holding of new Great Hunts. Including the one he won, we are in the fifth ... 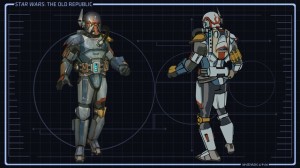 It was their opponents three hundred years ago who gave the Mandalorians this name. Between them, they talk about mandalores. Yes, like the title of their leader. Or as the name of their planet. And yet this is only a bastardized form. In their language, mando'a, we say mando'ade.

Mandos, as they are also nicknamed, come from a nomadic culture. They rarely have more than they can take with them. Their rare treasures are their signature ships, weapons and armor. Not all mandalores wear them all the time, but all have one to go into battle. They call it beskar'gam, because it is most often made of a material called beskar, a metal that is only found in the Mandalore system and capable of withstanding a lightsaber hit. But a fairly rare metal all the same. They do not display any ranks, with the exception of that of their warlord. Only marks announcing the carrier's lineage. The color has a meaning: blue stands for reliability, green for duty, black for justice, gold for revenge, red for honoring a relative, and silver for lost love. The most popular are blue and green. 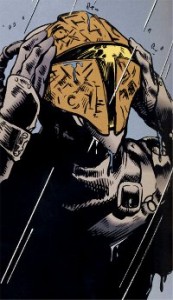 Like most nomads, the mandos place great emphasis on family and clan. They are warriors, who make no difference to the sex of their fighters. They therefore give a great place to children. As well as the adoptees. They increase their ranks according to simple criteria: share their state of mind and have a beskar'gam. Many races therefore intersect within the Mandalorian clans. If humans are not the original race, they are now the most numerous.

To become a mando'ad, you must therefore be familiar with several traditions brought together in a whole called the mando. In contrast, someone who is non-Mandalorian is Dar'manda, which can mean as much a stranger as an enemy or a traitor. Attachment to family and clan is one of these pillars. Honor is another. Obedience to Mandalore of course. All to train talented individuals who will serve the clans.

To make a dictionary of Mando'a would be far too long when some sites already do it. But it is always good to present a few basics:

And most importantly, don't forget while you are building your bounty hunters. A mando'ade facing several opponents always remains in numerical superiority.