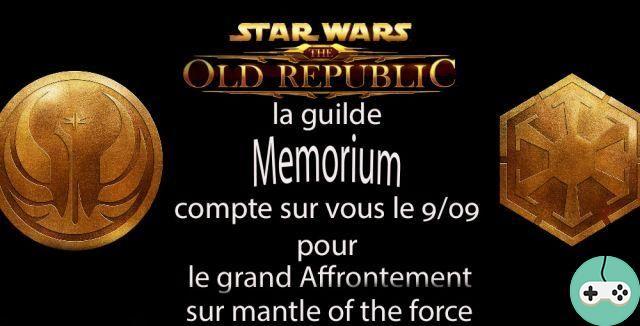 Following the enthusiasm for the first massive PVP event (approximately 110 people), we decided to try the experience again. This event will take place on Sunday, September 9 on the Mantle of the Force server. 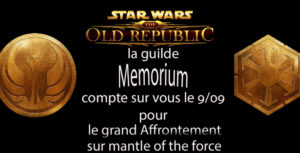 This time it will be a little different. Two personalized channels will be set up, one on the Republic side and the other on the Empire side, called memoriumevent. This will allow, if several groups of operations have to be created, to give the information to everyone. As for the groupage it will be between 20:30 p.m. and 21 p.m., it will suffice to respond to the announcements made in this channel.

To join a channel, it's simple just enter the command / cjoin memoriumevent, in the message bar. These personalized channels will be used to pass information through: 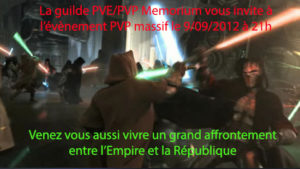 The event will take place in 3 parts, two organized and a third completely free):

As for the limit of people, we do not foresee any at the moment. At the last moment, if we see that one group is really outnumbered compared to the other, we will advise. There is nothing to gain except the pleasure of participating in a large gathering of players, having fun and getting to know a large number.

We really hope that a lot of people will be there (especially the Republic which was a little outnumbered the last time). Regarding behavior, we want everyone to listen to the organizers because, even if it is a massive event, a little organization is always necessary to avoid any overflow.

We invite all players, the event is based on PVP but both PVE and RP players are expected, your equipment does not matter, strength is that of numbers. For Rp players, the event announcements will be made in slightly RP form so if you want your character to experience a big battle, now is the time.

We are still looking for a streamer, a camera-man (one in each camp if possible) and a photographer (same one in each camp) to cover the event. To do this, contact either Enok'durpi directly in-game, or Starships on the forum. 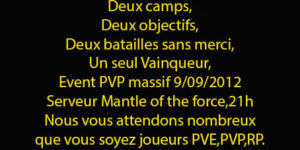 Do you want to be up to date and know all the tricks for your video games? In gamesmanagers.com we enjoy playing as much as you do and for that reason we offer you the best tricks, secrets or tips for you to play non-stop. We offer you quality content and always updated to keep you up to date. That's why, in our website, you will find not only videogame guides but also tricks, secrets and thousands of tips so you can play to the limit. Are you ready to get it? Enter now and enjoy your videogame!
ESO - A high-end vocal casting for TESO ❯