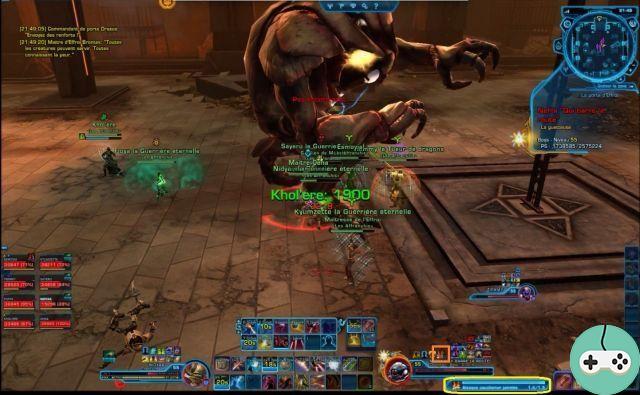 Here is the first guide to the Dread Fortress in Nightmare mode. It is the result of a collaboration between Nidya and Kyumz (Guilde Affranchis on Darth Nihilus), Keros (Guide Kraken on Mantle Of The Force) and myself Tigroou (Guardians of Anachore on MOTF). First, we will give you a reminder on the HM mechanics and then we will see the specifics of the nightmare mode. 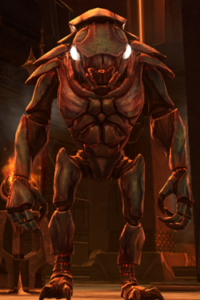 The damage from this attack hits the person with aggro as well as a person next to him. If no one is near the tank, it will be the only one to take the damage, but it will be too much to hope to survive. It is therefore necessary that the two tanks are constantly glued to each other in order to share the damage.

Regularly, a droid lands on the battlefield, moves up to a player, then a red area around it appears. Of course, you have to get out of the area before the droid explodes. If it's the tanks that are being targeted, it may be a good idea to warn them. Nefra being quite imposing, they don't necessarily see what is going on. They also need to move together because of the twin attack.

Voices of the Masters

Approximately every 30 seconds, the entire party receives a DoT (damage over time). It can (and should) be dispelled. Agree before you start the fight on how to best handle it. Do not hesitate to use Damage Classes that can help make it disappear.

There are tips for different classes:

Everything that was valid in HM, the rest in a nightmare, there are just a few complementary mechanics to assimilate.

New to this attack is that the tank that doesn't have the boss's attention takes a charge that stacks with each pair attack. If the tank goes up to 5 charges, the next paired attack will kill it. To counter it, it is enough that the tanks regularly exchange the boss. Doing it at 3 charges seems best to me to have time to wake up the tank which would forget to take back the boss if necessary. 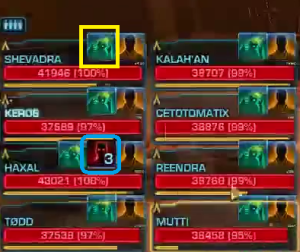 In blue, these are the charges of the Twin Attack.
In yellow are indicated the damage over time of the Voice of the Masters.

With each paired attack, Nefra gains a twin nightmare attack charge. Arrived at 15, he will launch this famous attack. In principle, this is the same as regular pair attacks, except that it takes more people in front of Nefra to mitigate the damage.

It is necessary that at least 6 people are in front of him at this time. You can either have everyone line up behind the boss and then the tanks flip him over at the right time, or have everyone walk past the boss for this attack.

Be careful, in all cases, to position yourself correctly at the end of this attack so as not to take the classic twin attack instead of a tank. 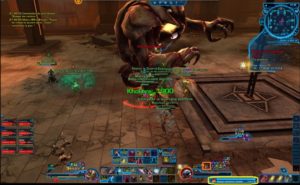 They used to run around. Now they jump on their target. In the end, that doesn't change much, you always have to get out of the red zone.

Videos from different points of view


Do you want to be up to date and know all the tricks for your video games? In gamesmanagers.com we enjoy playing as much as you do and for that reason we offer you the best tricks, secrets or tips for you to play non-stop. We offer you quality content and always updated to keep you up to date. That's why, in our website, you will find not only videogame guides but also tricks, secrets and thousands of tips so you can play to the limit. Are you ready to get it? Enter now and enjoy your videogame!
SWTOR - GSH - a first look ❯

SWTOR - The Datacrons of Corellia (Republic)