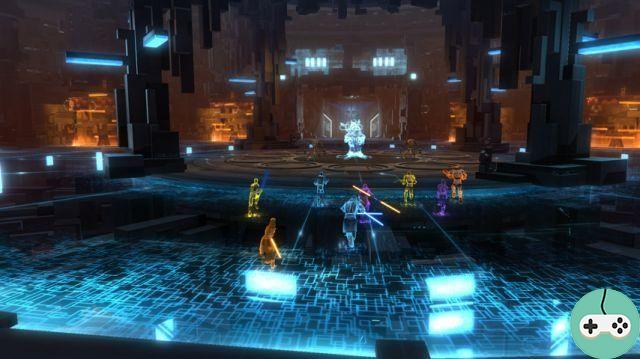 Hello, I introduce myself Zmx, Sith wizard specializing in madness and member of the Phantoms guild on the spanish server Darth Nihilus (JCJ).

As many already know, 1.4 has been available on the PTS since Monday evening, however due to a lack of character transfers the only high-level characters present on the test server are the old transfers from 1.2 and of 1.3. Two disadvantages therefore: few people to test and few people optimized in their equipment but that is not the subject. Having a character migrated to 1.3, with an average 58/61 optimized equipment, I therefore allowed myself to launch a small "dps lfg tfb story" in the general and after about ten minutes here I am in a group with 2 tanks, 2 healers and 4 DPS ready to go face what is on Asation.

Once entered the instance and the cutscene passed (and I can't tell you anything about the story since when I watched the cutscenes on Monday night, the spanish translations were not put on the PTS) a first thing jumps to the eye (well personally) the decorations are sublime. I loved the general atmosphere of the rather dark raid which further reinforces the idea of ​​a "Nightmare from elsewhere". So from the start, it gives a good impression, we feel that it has been worked on.

Second fairly important point: trash mobs. Bioware listened to the community! There are few packs between bosses and trashes that give Tier 8 crafting components (matrices and stabilizers). For the mob packs, everything goes smoothly, some packs require a focus on a mob but otherwise it remains (both in history and in difficult) basic: zone taunt at AOE!

As for the difficulty, although the instance is (according to bioware) made for columi I think that it might be fair for a group only equipped with, columi which does not know the strats. The story mode is still widely accessible (2h30 for the clean) although some bosses require a lot of team play and concentration. 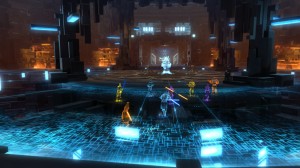 A big larva in normal, nothing very complicated: a bag of points of life with adds which arrive regularly, it is really a tank & spank. In difficult, and especially in 16 (since that's what I tested), it's something else. Several additional mechanics and a big reactivity are requested from the players. So an interesting boss but only in HM. 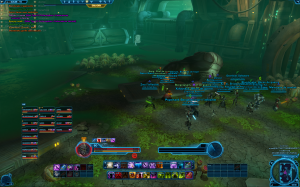 This boss is made up of three bosses, each with different buffs, just read them to find the order in which they should be killed. So we have 3 different phases, one for each boss. A fight that requires attention from the players (carefully observe its debuff bar or the animations of its characters) and responsiveness.

Regarding the 16HM, having fallen yesterday, several mechanics have been added the enrage timer of the 3rd boss is 1min after the death of his colleague, moreover having seen the Methodical down in 8HM the mechanics have some differences. So a nice boss in normal and really interesting in difficult. 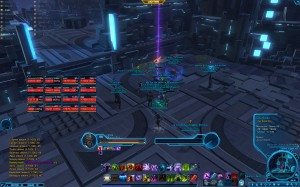 It's a play of colors. The strategy in normal is understood quite quickly while letting errors pass, but it is nonetheless interesting, the fight is captivating. It takes place in 2 phases: the first where you have to destroy "cores" (small pylons around the room) and a second phase, more focused on the boss himself.

In 16HM, we have only made a few tries for the moment but the strategy, while remaining similar in general terms, is dotted with small additional mechanics which make the fight much more complicated but also much more interesting.

Let's say it, the Dread Masters made a mistake by transferring the soul of Kephess, they put it in a pokemon. Other than that, a nice fight. As for the others, a strategy worked although quite accessible in story mode. For the hard mode, no idea what can happen there but given the puzzle, I think this one is likely to be very interesting.

So there, Bioware hit hard with this boss (visually very successful like the rest of the instance). The difficulty of this one, even in normal, will cause more than one group to fail. Several distinct phases will have to be managed as a team (especially the phase in the second dimension) and repeated a large number of times without making a mistake (the fight lasts more or less 10 minutes). It is a fight which requires a lot of rigor on the part of the members of the raid. For the difficult mode, the same and worse, there is no doubt that it may give a hard time, even the largest guilds.

To finish, I leave you the link of some videos, made by me:

The Phantoms Guild is actively seeking a DPS Assassin, 2 Marauders and a Healerheal Mercenary. For more information visit http://team-phantoms.verygames.net/swtor or you can wisp IG Lyliane or Astrëa.

SWTOR - The Heart of Infinity

Add a comment from SWTOR - Nightmare from elsewhere: presentation