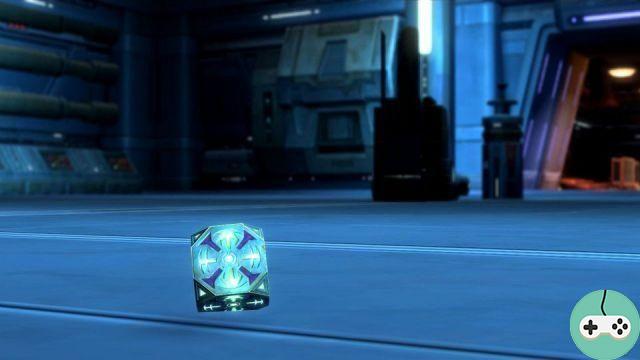 Holocrons are a technology the Jed'aii inherited from the kwa, their predecessors as Force masters on Tython. Then it spread to those who became Jedi. And since the Sith were born from a rebellious faction of the Jedi, they too have it. The principle is simple: a master records part of his knowledge in a device which can only be accessed by using the Force. Once activated, a hologram answers questions whose keywords activate its more or less pre-recorded answers, with more or less freedom in relation to the reactions of the interlocutor. A holocron can therefore perfectly replace a professor in flesh and blood.

With two exceptions. No initiative on his part to decide which topic to discuss, and if you don't say the right keywords, he will remain silent. The master having recorded his parameters, therefore his personality. Let us add that, in the parts that we do not yet understand, some holocrons are able to remember what they have already discussed with users. It is common for Jedi to share the same holocron with several people, but only one at a time can be activated to share its lessons. In seeking to improve this, they developed the noetikons, special holocrons. Here, a whole mechanism is necessary to activate it, the space freed thus making it possible to integrate new systems. Each noetikon can accommodate the recordings of three masters, summoned jointly. Thus, for each question, they are able to discuss among themselves and compare their points of view. And therefore find a better solution.

There are three noetikons, which can be combined to gain access to the knowledge of nine masters. Most of them were recorded between three and four centuries ago. They were at the Jedi Temple in Coruscant when the Sith attacked the Republican capital. For ten years they have been lost. But even recently recovered, they remain difficult to use because the Sith destroyed the terminal that allowed to operate them.

note: each noetikon hosts two characters already known from the Extended Universe Legends, but each time the third has been created for the occasion. For these three, there is currently nothing more to say than their names. 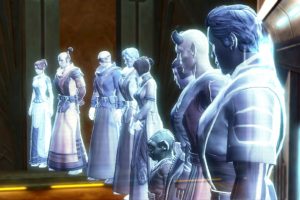 The noetikon of science is the one most often invoked among the three. It brings together a large amount of knowledge in biology, chemistry, technologies and other sciences. The three masters who act as intermediaries for this gigantic data bank were renowned for their great talents as teachers. Although sometimes their students did not always have the greatest glories of the Order.

A l'image d'Arca jeth, who was one of the greatest weapons masters of his time but who is best known for having led the academy of his home planet Arkania. Talents applauded and respected, even if his most famous student became after his death number two in the Brotherhood of the Sith. And he's not the only one to have sunk into the Dark Side. But, at a time when the Jedi were seen as an aristocracy, he managed to create a great reputation for himself even outside of the Order.

Vandar tokareHe was a professor at Dantooine Academy, as well as a member of the Jedi Council. He took care in particular of the young initiates. While the Council in his time was conservative, he was considered more moderate. But it would never have occurred to him to stray too far from the line chosen by his comrades, no matter what he thought. During the Jedi Civil War, he was one of the most involved in the redemption of Revan, even going so far as to publicly congratulate him after the Battle of the Star Forge. He was killed during the Purge of Darth Nihilus.

The trio is completed by the human Tharis Orne, also highly respected in his time. 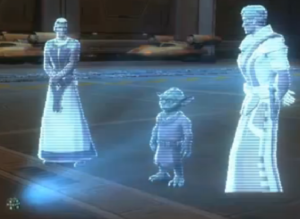 The noetikon of light turns to advisers who are totally dedicated to the Force and the Jedi ideal. Nomi Da Boda, better known by the name of her first husband Nomi Sunrider (name not used in the game due to legal issues, which blocked the use of the character and his family in several projects since KOTOR), was even the grandmaster of the Order in difficult times. A veteran of the Onderon War and the Great Sith War, when demotivated Jedi struggled to come together and rebuild, she was one of the fiercest and the symbol of reunification. Although entering the Order late, an adult and already a mother, she was the torch that supported and guided her comrades. But you don't have to be as high as her to keep her company.

Noab Hulis the miraluka, was only a professor at the academy of Arkania of Arca Jeth. He distinguished himself in particular by bringing back to the luminous side a knight lost in the Dark side. He had married a human, and they had a daughter Kyndra, who held more of her mother (understand that she appeared as a human, with eyes to see). The latter will play an important role in the reconstruction after the Great War of the Sith, even if she posed as a rival to Nomi and that it will eventually be discovered that her faction was full of traitors. But Noab had nothing to do with this, he was already dead when she started to slip.

The third member who inhabits this noetikon is a human called I prefer Vahn. 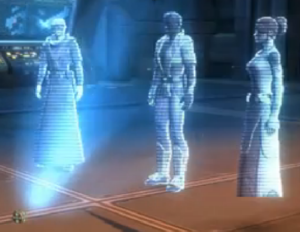 The noetikon of secrets finally contrasts with its two predecessors. Its members are less illustrious, have not known heights like the Jedi Council. Even if they have been noticed enough to be asked to participate in this great compilation of knowledge. What is their favorite field, these secrets that give this name to noetikon? Well that's the Dark side. All three have given in to his promises, they have fallen. But they've come back to the light, and to the Jedi. Well, more or less.

So simple padawan, Bastila shan had been a spearhead of the Order during the Jedi Civil War, the only one able to withstand Darth Revan thanks to his combat meditation power. She eventually captured him and after his memory was erased by the Jedi Council, became his guardian. She began to have feelings for her prisoner, and ended up sacrificing herself for him. She allowed herself to be captured to cover her escape, and Darth Malak tortured her until she fell into the Dark Side. Revan will save her, and marry her. But by recovering his memory, he made him share his doubts vis-à-vis the Council. After the Jedi Civil War, it will maintain some distance from the Rebuilding Order. Not quite the profile of the other members chosen for the noetikons.

The Devaronnian Chamma is more classic, since he founded and directed an academy. But what a journey to get there! About 750 years ago, this Jedi knight was the sole survivor of a relief expedition in the Althiss system. He only survived a trap thanks to the Dark Side, and lived as a hermit for several centuries on H'ratth until Noab Hulis came to convince him to return to the Jedi. He resumed his training from the beginning, and when he returned to H'ratth, it was to make it a teaching center.

To be in their company, Jesper Altex must have had a similar experience. 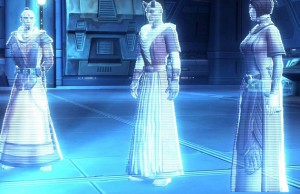