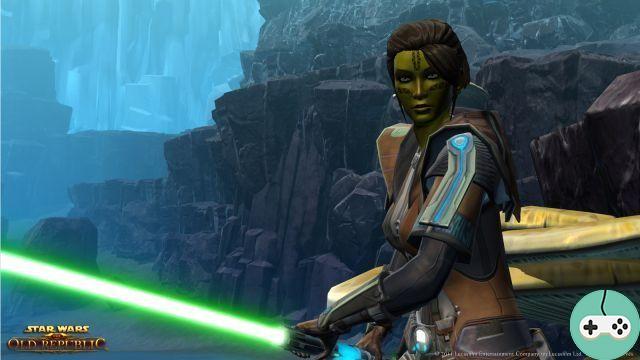 A guide proposed by Endra, Inoctavo.

This guide is the translation for the Shadow of the excellent guide made by Fayte for the Assassin. Just like him, I have been playing my Ombre Tank for almost 3 years, I join him on his advice. 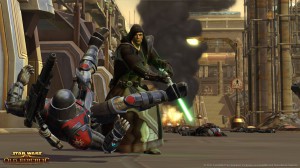 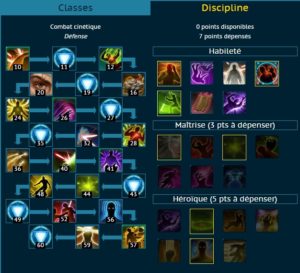 Speed : Reduces the cooldown of Interrupt by 2 seconds, Force of Will by 30 seconds, and Force Speed ​​by 5 seconds. I take this use because it allows me to increase my mobility with Force Speed, and I find it important to be able to interrupt a spell and be able to free myself from a control more often.

Subterfuge : 15% more speed in combat. As in 2.0, this talent has not changed, it may not seem like much but in fact it is very useful and effective in both PvE and PvP (no more excuses if you stay in an AoE).

Vilipendage : Increases the damage of Whirlwind Blow by 25%. Additionally, it should be noted that targets that have our -5% Accuracy debuff via Force Breach, will take 15% more damage on Whirlwind Blow, which gives us a total of 40%, with that, the Whirlwind Blow does almost as much damage as Double Attack when single target.

Mental defense : Reduces damage taken while under control by 30%. This talent will only serve us if strategies require it. At the moment, this is not the case, so I am limiting this use to PvP.

Mind over matter : increases the duration of Resilience by 2 seconds, mandatory in Tanks.

Fanage : Reduces the cooldown of Force Occult (vanish) by 30 seconds. The Fanage use is taken in addition to the Resilience Camouflage use in the Heroic section.

Anxiety : Increases damage taken by enemies controlled by Rotating Kick or Force Stun by 5%. This use can be useful for burst phases outside the boss. Take the example of the "clock" phase of Brontes, this talent could have allowed us to increase all damage done by the raid by 5% on adds.

Shadow Shelter : Our buff of 5% healing done by everyone in our phasic movement. In addition, we gain 3% additional healing received as a passive bonus.

Resilience Camouflage  : Activating Force Occult activates Resilience for 2 seconds. This talent is just great for the Shadow tank, that's why I'm taking the cooldown reduction of Force Occult (Fanage in Mastery), and you should also know that the 2 seconds added to Resilience also works with this talent (Disjunction).

So we have a 5 second Resilience in defensive power, plus the Vanish which activates it for 4 seconds! Using the vanish in Tank requires adapting but it can be done in complete safety, since the Bosses have a GCD, and the vanish and the taunt are out of GCD. And incidentally, you are not the only tank in the raid. It also gives us the ability to dissipate effects twice in a row.

Aplomb : Deflection makes us immune to controls, immobilizations, slowdowns, etc. etc. The use of this use will be really circumstantial in PvE, and especially to use the Deflection for this purpose seems to me to be a waste because it is a really effective defensive power if well used, this talent is on the other hand very effective in PvP.

Of course, we pull in Stealth to have the 4 accumulations of armor from the pull and with the Kinetic Guard.

1. Ecrasement mental : This is new in 3.0, since we can use Mind Crush up to 30 meters, putting it on the pullover just before using Force Pull gives us enough animosity to fill the lack of Strength Content (which is now a defensive power).

You will have generated ~ 15 threat even before the DPS attacks the boss.

3. Projection : our main source of animosity throughout the fight. Use as soon as possible (your threat will already be above 20 normally).

6. Double attack : the rest of the cycle will depend on your procs.

8. Idle time ou Force Breach : Depending on your procs, if you have them all, you will have Slow Time available, otherwise only Force Breach.

9. Provocation Mono/Multi at 3 meters or more. If you do a taunt at this precise moment, you multiply your animosity so as to avoid any resumption of aggro for the future. In 16 I still recommend a 2nd taunt after your next Debris Cascade. The importance of 3 meters between the boss and you is explained at the end of this guide.

10. At this time, it is not a power that is to be done, but an announcement on your voice. This announcement consists of requesting the first aggro reduction for your entire raid. Thanks to your taunt, you have multiplied your threat by 130%. If the DPS make a reduction in animosity right after your taunt, they will reduce theirs by 25% (except in special cases like the vanish of the Shadow / Thief), you will have a good lead on the aggro list, which will avoid any reprise.

Back to 6. Double attack

Force Breach : The 5% less accuracy debuff allows us to increase the damage of the Whirlwind Blow by 15%

Whirlpool shot (normally activates Particle Acceleration). If you don't have a bowl, do a second Whirlpool.

Why do I put the Shield last?

Quite simply thanks to our Kinetic Guard which offers us 15% (20% with the set bonus 2 pieces 180/186), and also because it is not a statistic that we must manage, since the shield does not competes with no other Tank statistic, we put as many as possible without asking any questions.

Regarding Absorption / Defense, I'm a tank who doesn't like Defense because it's double or nothing. Either we take all the damage in the face, or we take nothing. This statistic is a trap
for the healers!

It is better to regularly take small damage (Absorption), than to take randomly large slaps that will surprise your healers (Defense).

The ideal is still to have 2 pieces of equipment, because depending on the type of damage done by the boss, the Shield or Defense can be ineffective: 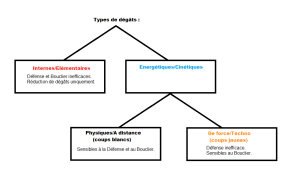 Total index in equipment 198, all inclusive:

So for example, if we go full Absorption, we can reach 61.12% maximum. Seeing these numbers I decided to make 2 even more radical pieces of equipment between Absorption and Defense, but I also decided to go back to modifications which have more endurance than Willpower, and therefore less index. , because with such high percentages, the difference in statistics is really anecdotal. On the other hand, the gain in life points is not (3200 hp against 1.7% abs, or 0.9% defense).

I'm not telling you to do the same thing, but with my way of playing (2 equipments), I will have quite high statistics so the gain of the modifications optimized in Defense / Absorption will be more and more.
weaker (declining curve), unlike Endurance (linear curve).

Here are the stats I'm aiming for with 198 different gear plus boosts + stim + buff. Note that it may not be possible to have certain indexes to the point, because of the limitations due to tokens (for example: Implant in Absorption, Headphones in Defense, I say it like that, I have no checked) :

For those who do not have the motivation to get 2 pieces of equipment, these indexes seem correct to me to be "go anywhere".

I will do different tests, but I still think to keep 2 bonus armor sets from set 186 which adds 5% more Shield with the Kinetic Guard, instead of the 6 pieces 192/198 which adds 3 charges and 3 seconds duration. I don't find it more interesting than the + 5%.

The loss of Stamina / Armor Index on both armor is ridiculous.

The activatable Shield / Absorption relic is too weak to be of interest.

Résilience : Dispels all hostile effects (dispell), and gives us a 100% chance to resist Force / Tech attacks for 3 seconds (5 seconds with Spirit use on matter).

It is the defensive CD that makes the Shadow Tank so special. Well placed, it is very effective, but be careful not to miss it and use it on very specific Force / Techno attacks, so it requires
knowledge of the boss cycle and their damage types (I recommend the use of Parsec, which shows you the different types of damage received).

Deflection : Deflection increases our defense chance (therefore dodging) by 50% for 12 seconds. It is a very effective CD for "freeing" your healers for a short period of time on defense-sensitive bosses or adds. I use this CD for example when the raid has taken a good slap and therefore the healers will be busy elsewhere, or to avoid a burst.

This CD makes you immortal on Nefra / Grobi / Calphayus for example. It is very effective on Draxus (only Draxus himself, not Adds) and Corruptor's Adds as well, however it is almost useless on bosses like Tyrants and Brontes.

Readiness to fight : The Readiness to Fight gives us an additional 25% damage reduction, plus it
restores us 15% of our maximum health. It has the advantage of always being effective regardless of the situation, but above all very useful to relieve your healers and allow them to go back up the raid!

This defensive CD is your priority CD since it will work on all attacks thanks to the increased damage reduction in addition to the healing received (it works even on DoTs), use it alternately (30sec-1min d 'space) with your medipac allows you to have a "panic button" regularly available. Their cooldowns are similar (1min30).

Strength Content : the big novelty of this 3.0 for the Shadow Tank is the change in the Strength Content. In addition to giving us 2 additional 60% critical loads on our Force attacks, it now gives us 30% Absorbs for 20 seconds! It's really interesting and effective because you will exceed 80% absorption, you will allow your healers to maintain you much more easily for a long period (20 seconds is not bad).

As a result, we no longer use Force Content in our cycle or on engagement, because it is no longer just an offensive CD, it is defensive and offensive, but its use for a defensive purpose is so much more interesting in Ombre Tank that it is a waste for me to use it offensively.

(Vanish -> Taunt -> Lightning explosion under Vanish's Resilience if within 4 seconds, you have to be good timing on the other hand but with experience it passes).

The occultation and the Taunt are out of GCD, therefore well placed they are easy to do and without risk as long as you do not make the wrong order ...

Taunt in SWTOR is special because it works as a threat multiplier.

Tip for CaC DPS: If you get more than 3 meters away, you will need to generate 20% additional threat to regain aggro.

We have (like all tanks in SWTOR) 2 provocations at our disposal:

Mind control : this is our single target taunt, it has a 15 second CD and a range of 30 meters.

Mass mind control : as the name suggests, this is our multi-target taunt, it has a 45 second CD and
an area of ​​effect of 15 meters around us.

Hope you find this guide helpful. And if you have any questions, don't hesitate!

The Sims 4 - Sing Simlish with Echosmith and Big Data