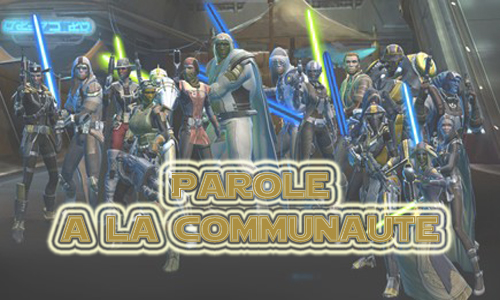 Today, in Word to the Community, we welcome the guild The Black Guard, installed on the Mantle of the Force server.

Guild history
Guild founded in the year 2013 by a handful of rather casual players. It experienced a rise in power from the moment when 2-3 players who joined the guild along the way (currently GM and officers) wanted more than just farming history operations because they were used to HM outings in their old guilds. . Subsequently, we had an intensive recruitment phase, far from the usual method of pompous applications, which brought us some bad but also very good surprises!

Multigaming? If so, on what other games?
No, we don't have the time to PL all spanish-speaking players on all the games at the same time, we still have a minimum of modesty! Some players are absent from time to time on other games to take their minds off such as BF3 (thanks to the free offer of the latter) or even WildStar or Star Citizen for example.

Why this name? A motto?
You would have to ask the founders of the guild but they have not played for a while On the other hand Jostix and Cir'deck joined this guild because they had belonged to the late "black guard" formerly called the Sith Order on the "Phateem hall" server of knowledge ", a guild close to excellence in its time. Elders of the same guild joined them later, including Lun'pesh and Fayte.

As for our motto it is known and recognized throughout the imperial fleet: In Troll We Trust

Orientation (PvE, PvP, RP)? In-game activities?
PVE with the whole of the content 8 HM clean with the head, on Fortress Nightmare, on the other hand we are still on Draxus, must be said that my Partner is having trouble and I think therefore to show my presence to facilitate the task.

We also offer trolling lessons to all those who wish it for a few credits, we also sell PL on Forto / Palais HM by means of payment in kind this time, and it is Jostix who "collects" ...

Hierarchy? Family guild, organized?
Family guild, disorganized, made up of an interim GM and 4 officers (we haven't seen the GM for months, probably on vacation in Rodia). We favor good understanding and fun at the expense of the pure and hard result by trying to get everyone to go on an HM raid, even people who we know full well that they do not necessarily have the capabilities, or even beginners that we embark directly in HM at the risk of wiping more than reason, it is in the difficulty that we learn.

And then hey, the story mode is done with a Litigation Zone roster, so it would be insulting to confine players to this game mode!

Reviews of the game?
We take pleasure in bugging the fleet with the / tracker, but we are all starting to tire of doing Palais / Forto on a loop every week for months, even if GS and soon Strongholds are nice additions, we would really like some real ones. news on the side of PvE HL because we are starting to saturate nicely.

A small example of one of our evening / slack on the fleet on our twitch channel (epic 26th minute).

An anecdote about the guild?
Probably the most blacklisted guild on the server since we happen to organize what we call "Imperial NiM Fleet", it simply consists of trolling the fleet when we are bored there and I must say that it gives It's a lot of fun, especially when it reacts to the quarter turn and the 1st degree, without however disrespecting or insulting anyone.

Our recruitment ads are world famous and unfailingly modest, here is an overview:

Do you like to fuck yourself? Do you think you are the best? Know that the recruit, and we are much better than you! Stop waiting and join a REAL guild.

One more thing, if you are looking for Sunday guides on your classes, Jostinaab who can not play any character had fun translating Dulfy's guides, they are available on our forum.

Thank you to this "funny" guild that is La Garde Noire for this "original" presentation.

Add a comment from SWTOR - PCM - The Black Guard