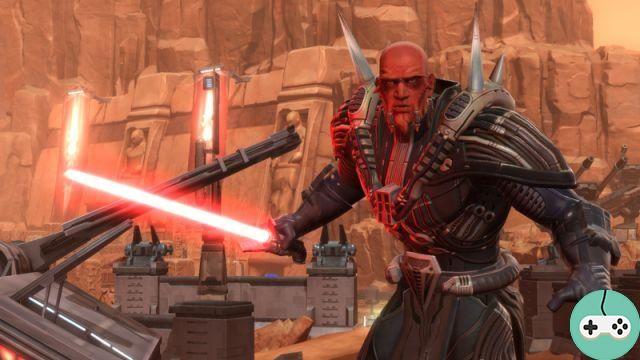 Originally from the planet Korriban and having established themselves there as the dominant species around the year -100.000, the Sith are humanoids with dark red skin, whose skull is surmounted by small horns, and endowed with 'a long, tapered chin. Sith society, relatively primitive, is based on a very rigid caste system, based on the distinction of subspecies within the Sith race. The lowest and most despised caste is that of slaves, then comes the caste of warriors, and finally the largest and most powerful group: the magicians, whose natural sensitivity to the Force made them men feared by the rest of the population. These are the magicians who rule the Sith clans.

Thousands of years before the Galactic Civil War, the Sith people were discovered by the Rakatas, who wanted to enslave them, but it was without relying on the strength of the Sith led by King Adas, who kicked the Rakatas out of the way. Korriban, not without losing his life. Following the death of this ruler, the Sith people sank into a period of civil wars before finally being once again ruled by a single ruler. Thus, the Sith continued for several thousand years to live on the fringes of galactic history. At least, until the year -6.900, when a group of Dark Jedi, exiled by the Republic for having risen against their former comrades and having sowed death during more than a century of fighting, landed on Korriban . Thanks to their immense powers, the Exiles succeeded in being worshiped as gods and in controlling the Sith. The renegades quickly discovered the potential of these people, and especially of their magicians, able to use the Dark Side of the Force to conduct various alchemical experiments. The new masters of the place also studied the evil arcana and took the magicians under their wing in order to develop their powers even further.

Over the next millennia, genetic distinctions between the Sith and their masters gradually blurred. While there were a few relatively "pure" bloodlines left, most of the inhabitants of the Sith Empire came to share the same genetic background and appearance. The particular traits of the Sith were slightly attenuated by the human DNA of the renegades, but their greater numbers allowed them to retain most of their genetic makeup. Under the aegis of the Sith Lords, the planet Ziost became the capital of the Sith Empire. As for Korriban, immense works were put in place on this planet to build the most gigantic temples and mausoleums that the Sith had ever seen, making this world the spiritual center of the Empire as well as a necropolis for the Sith. Black Lords. Other worlds were conquered: Khar Delba, Khar Shian, and many more. The Sith Empire reached its golden age approximately 5 years before the fall of the Galactic Republic. At that time, the Sith Empire was ruled by a council of the Sith Lords, themselves under the command of the Dark Lord of the Sith.

The Sith also became the object of experimentation by their masters. Thanks to the magic of the Dark Side, some representatives of this species were genetically modified to perform certain tasks. Lord Naga Sadow even employed a particularly powerful and dedicated subspecies of warriors, who came to be known as Massassi. He continued thereafter to genetically modify his servants, who grew stronger, but gradually lost all resemblance to their original species. Blinded by their hatred and thirst for power, the Sith Lords unleashed vast internal conflicts and fought the Republic in the Great Hyperspace War.

When the First Sith Empire was defeated at the end of the Great Hyperspace War, several small factions survived. One of them, led on Yavin IV by Naga Sadow, made up mainly of Massassis, could not rebuild the ancient Sith civilization and the last Massasis perished when the Dark Lord of the Sith Exar Kun used their life energy to survive. its spirit in the temples of Yavin IV .. Other groups took refuge on Vjun and Thule, led by a mysterious Dark Lord (the future Sith Emperor), settled on Dromund Kaas where it prospered and soon spread to d 'other planets. Thus was founded the Second Sith Empire. As this new empire flourished, more and more human populations were integrated into the Sith nation and interbreeding continued for over a millennium. When the Second Sith Empire swept over the Republic by triggering the Great Galactic War, the original Sith species no longer existed and only Sith-Human hybrids remained, retaining some characteristics of their ancestors such as facial appendages, red skin, etc. But all of them retained a strong attachment to the Dark Side. They called themselves the "pureblood Sith" to distinguish themselves from the rest of society and from the hybrids who no longer retained any attributes of the ancient Sith. However, the conflict with the Republic, although longer than the previous one and interrupted by the Cold War, had the same end as the previous one. The Second Sith Empire was wiped out and the Sith species vanished for good.

The Sith were powerful users of the Force, and explored many aspects of the Dark Side. They designed powerful artefacts, such as Sith amulets, whose very exceptional properties made it possible to amplify the powers of the wearer. These items, mostly destroyed today, remain unique in their design, and art collectors are snapping up the latest Sith relics at a price of gold. 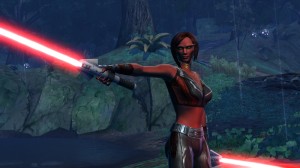 
Do you want to be up to date and know all the tricks for your video games? In gamesmanagers.com we enjoy playing as much as you do and for that reason we offer you the best tricks, secrets or tips for you to play non-stop. We offer you quality content and always updated to keep you up to date. That's why, in our website, you will find not only videogame guides but also tricks, secrets and thousands of tips so you can play to the limit. Are you ready to get it? Enter now and enjoy your videogame!
Armored Warfare: 7 months later ❯