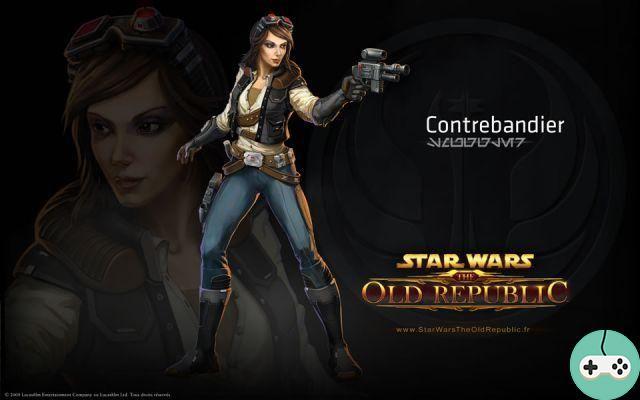 Attention, this article contains the elements of the history quest of the smuggler class. It therefore contains revelations. Be sure to go out if you don't want to know them.

An XS model freighter rushes towards Ord Mantell. On board, a daring young smuggler seeks to make a name for himself by delivering blasters for Rogun the Butcher. Unfortunately, on the surface, things don't go as planned. Skavak, the agent sent to the reception, scams everyone by stealing the ship and its cargo. However Rogun is known to take revenge for such situations by eliminating the thief, but also the transporter who was stolen and the person in charge of the sector for good measure. With Corso Riggs, one of the henchmen of the corner, the captain tries to go up the track as quickly as possible. In vain, Skavak manages to escape off the planet and Rogun has the head of his organization executed on the planet. Bounty hunters and assassins are on the smuggler's trail.

The two partners continue their hunt to Coruscant. Corso knows someone there who can help them, professional player Darmas Pollaran. This one calls on contacts, which make it possible to learn that a Sullustean policeman is also on the heels of Skavak. The Empire is also involved. The thief only narrowly escapes. Good news outweighs bad news. He got rid of the XS freighter, and the captain can get his ship back. He finds inside an adventurer named Risha, who had made an agreement with the traitor to go in search of the legendary treasure of Nok Drayen. An agreement is reached between the two parties, she is absolutely not against finding a new partner. And if Skavak is so interested in the contents of this treasure, he will come back to cross the path of the smuggler who will finally be able to settle his account. 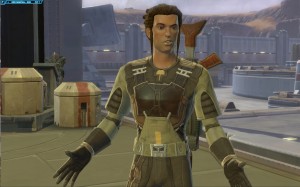 The first stop on this treasure hunt is on Taris, where some astronavigation data can be found. Beryl Thorne, a former Risha associate, has already started clearing the land next to her main business of researching (and trafficking) ancient artifacts. But she has an inspector who suspects her of sometimes working outside the law and lieutenants who don't quite agree with her way of doing business. A bag of knots to untangle before you can leave with the desired cards.

Then direction Nar Shaddaa. Hutt Drooga agreed to exchange a technological prototype for the ship for a male shanjaru. But his female has been stolen from him, so he loses interest in this market. He just watches the wookie slave Bowdaar fight like a gladiator. To bring him back to better feelings, we have to go get him the lost animal stolen from him by a group of ecoterrorists from privileged classes. Themselves being manipulated by an unscrupulous scientist. With the added bonus of a Rogun killer on the heels. But Drooga has what he asked for, and shows his satisfaction by adding Bowdaar to the deal. 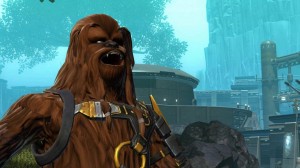 Nok Drayen's last great rival is installed on Tatooine, and he has special sensors that will allow him to ascend to the treasure. But he is also wanted by two other people: a Jedi and a Sith. The second has troops that can crush the criminal organization. Little chance of escaping, but you have to go find these sensors, even if it means having to go to a base hidden in the middle of the desert.

Alderande finally. The end of the road is coming. A droid to bring to the last representatives of the noble house Teraan in return for support, but they cannot honor their end of the bargain because their enemies have weakened them too much. They need help to regain sufficient status. Then deliver a frozen head to the Alde Museum, that of the former Sith Dark Bandon, for a special hyperdrive. But Skavak has already deposited a copy. Chase to catch up with the thief, but he still barely manages to escape. A small passage on Tatooine to save Risha's friends kidnapped by strange assassins then return to Nar Shaddaa for the last delivery: a carbonite prisoner who turns out to be Nok Drayen, Risha's father. Former legendary crime lord but also the heir to the royal line of Dubrillon. He needs someone to go and find his treasure, the crown of his ancestors, aboard a ship about to disappear into a black hole. The smuggler does so and finds Skavak there. Finally the traitor will pay. Having all the pieces to claim his inheritance, Nok Drayen bequeaths them to his daughter before dying of illness. But Risha has no resources to claim her status, apart from an associate whose crew she officially joins. 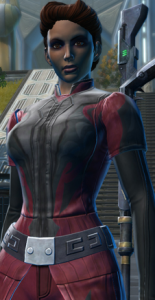 Some time later, Darmas Pollaran invites the smuggler to join him at Port-Nullepart, a smuggling station. He wants him to meet Senator Bevera Dodonna. By discovering the coveted treasure of Nok Drayen, the captain has carved out a reputation for himself sufficient to justify integration among the Corsairs of the Republic. But between Rogun's henchmen and Imperial Admiral Harridax Kirill's attack on the station, it was difficult to negotiate. This sinister Imperial officer, nicknamed the Nether Wolf, seeks to bring the underworld under his command. The Smugglers of the Republic obviously seek to prevent it. On Balmorra, this is Project Nebula, designed by the Republic but developed by the Empire. The moff responsible for it has had a Mandalorian clan executed, and the last survivor wants revenge. But that only leaves a bitter taste in Akaavi Spar's mouth. And idle, she then embarks with the first smuggler she meets.

A cry for help diverts the corsair to Quesh, where the Nether Wolf has cornered several smuggling ships. An operation that some may qualify as a waste of time or a waste of energy, but working on your network of connections is not useless.

On Hoth, the Nether Wolf's men seek to seize a camouflage system from the White Claw pirates. A Jedi my calamari seems to want to help him, but turns out to be a crook. Languss "Guss" Tuno never finished his training and works for the pirates, but a betrayal by his boss causes him to switch sides. The system is ultimately revealed to be a young, mentally retarded, Force-gifted youth. Then Darmas Pollaran offers to participate in the robbery of an imperial cruiser carrying the pay. The Void Wolf destroys the ship when it is found to be infiltrated, eliminating a few rivals in the process. The robbery was successful, but Senator Dodonna came to witness the operation and was attacked by Rogun's men. It's time to get rid of the Butcher. 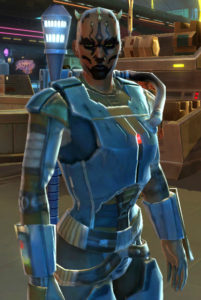 An organization like Rogun's has ramifications that only he knows about. So where do you start attacking him? His mentor the Ivorier is locked up in Belsavis prison, and it was he who formed this organization. What can he say about it? But he takes advantage of an Imperial attack to escape, and flees to a ship hidden deep in the planet. With a killer of his former disciple on the heels. Will the corsair catch up with him in time or will he repeat the same mistakes as with Skavak? No, this time he manages to catch up with the Ivorian before he boards his ship and eliminates the killer. The prisoner will be able to speak.

On Voss, Rogun supplies himself with creatures unknown to the rest of the galaxy. Creatures that are illegal to trade on the planet. A planet that does not belong to the Republic or the Empire, and whose rules are very strict. The Butcher does not respect them, and anyone who approaches these activities is immediately considered suspicious. So here is a new planet where the police will be warned and where it will not be good to spend your holidays. But the influence of Rogun eliminated, the smugglers installed on the planet recognize its merits. 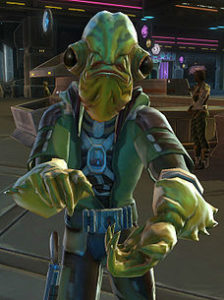 Darmas Pollaran has found Rogun's hiding place on Tatooine. The privateer goes there to finish the whole affair. But what he discovers does not please him. Darmas Pollaran and Senator Dodonna laughed at him and work for the Nether Wolf. Believing he was fighting him, he therefore helped his enemy. There is only one way to get revenge, and that is to unmask all the conspirators, currently reunited on Corellia as the battle rages on. Risha's friend Jedi Sumalee is willing to help clear the captain's name but can only provide information and contacts. It's up to the smuggler to go out into the field and find his targets. Imperial Agent Darmas Pollaran goes to confession in the cosmetic surgery clinic where the operation that was to change his face for a future mission is interrupted with blasters. The corrupt Bevera Dodonna is found betrayed and enslaved. What about Admiral Harridax Kirill, the Nether Wolf? On board his cruiser in orbit, he tries to assemble a large coalition of pirates in his favor. Defeated in a duel, those he was trying to impress line up behind the opinion of his winner. Feats that earned him respect and a reputation up to the highest levels since they allowed him to meet up to Supreme Chancellor Saresh.

With the affair with Rogun the Butcher settled, the Void Wolf dead, the smuggler no longer has a deadly enemy that involves running around every corner of the galaxy. But his status as a privateer of the Republic is still there, and allows him to do business on the front line. A territory where only a handful can afford to go to work. This is how we were able to find him on Illum and on Makeb. As a new threat begins to appear, there is no doubt that the High Command of the Republic will not hesitate to call on its special talents.


Do you want to be up to date and know all the tricks for your video games? In gamesmanagers.com we enjoy playing as much as you do and for that reason we offer you the best tricks, secrets or tips for you to play non-stop. We offer you quality content and always updated to keep you up to date. That's why, in our website, you will find not only videogame guides but also tricks, secrets and thousands of tips so you can play to the limit. Are you ready to get it? Enter now and enjoy your videogame!
Wildstar Update 11/09: Skills, AMP and Raids ❯

Add a comment from SWTOR - Smuggler: The Void Hunter