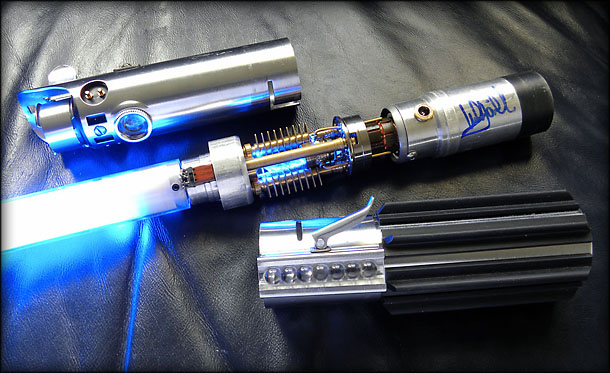 Even before the Jedi Order turned exclusively to the Luminous side, their predecessors were already fighting at gunpoint. It was an already well-established tradition, while blasters were already prevalent in the surrounding areas of the galaxy.

Then the rakatas arrived, equipped with sabers-Forces. Weapons that appeared in the form of a sleeve. But when activated using the Dark side, a blade of energy capable of slicing everything appeared. Tython's craftsmen attempted to copy it, but experienced a technological and philosophical shift. Eventually, they succeeded in producing something quite similar, with similar effects but not affiliated with any side of the Force, and which a simple switch can activate. Lightsabers were born.

Soon new fighting styles would develop to exploit it, as well as new defenses to counter them. This new weapon quickly became a hallmark of the Jedi. And as the Sith as we define them were born from the meeting of two groups including renegade Jedi, they thus inherited. 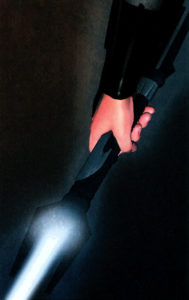 For the Jedi, there is a connection between a weapon and the one who wields it. This is why each padawan must build his own. This artisanal production implies that each copy is unique. By extension, each manufacturer adds modifications that suit him and removes others that he deems unnecessary. In the end, the essential parts are limited to five: handle, activation system, lens, power cell and crystal. Some add additional regulatory or stabilizing elements, but are not always more useful than decorations.

The handle serves as a shell for the handle. The activation system allows the blade to be triggered or retracted. The lens is the projector that will determine its shape. The power cell is the energy source that powers the whole thing. Finally, the crystal determines the color that this lightsaber will have (the color of the halo that surrounds the white heart, to be precise). Please note, this is a simplified explanation. The manufacture of this weapon is very delicate, and those who venture there practice it in a state of Force trance. Certain elements therefore work together to obtain the final result (lens and crystal not to name them). Not to mention the additions of some artisans who modify this process. 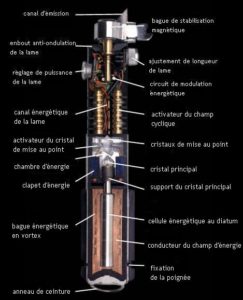 Most of the parts that make up a lightsaber are easily accessible. Even a speeder grip can do the trick as a handle. But that was not always the case. Before we discovered the datium cell to find a sufficient source of power, and superconductors able to route it better (reducing the quantity demanded), the Jedi had to carry a generator with them connected to a cable until 'to their weapon. We call it a protosabre. Not very practical for some dueling moves, is not it? Fortunately, it is much easier today. The most delicate part is the crystal, which in addition to having certain properties detectable only by Force users, must be flawless. The ideal would be an adenga crystal, which can be found in mines like on Ilum. Crystals that can be synthesized, but which will then be of lower quality. A few others may do the trick as well, but only a Jedi or Sith can determine if this is the case. A lightsaber can accommodate up to three crystals: a main one for the color (essential), and two others to refine, strengthen the blade or to modify the size. This scenario is visible because the blade will be damaged. Several possibilities are to be considered, such as a different heart. 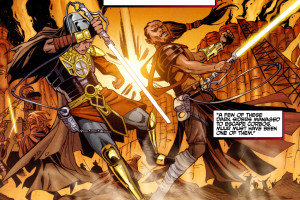 In addition to the protosaber, there are several variations of the lightsaber. The best known is the double-bladed saber, whether it is two sabers welded together or a device that manages everything by a single activation system. The laser spike requires the same style of movement but the handle is much longer, like a stick. The shoto is a more classic lightsaber, except that it is not longer than a forearm. Reserved for small users or in the left hand to deflect enemy attacks. The guard shoto (or laser tonfa) has a T-handle which makes it more efficient, but many Jedi weapon masters frown on its use. The big lightsaber is just a giant saber, for the oversized user. The saber with the curved handle obliges to better distribute its weight in order to attack in more unexpected angles. The double-phase saber has the possibility of seeing its length change by pressing one of the buttons on the handle. The Laser Whip is one of the most unpredictable and unwieldy weapons out there, with its soft but still sharp blade. And still others imagined by certain manufacturers and not referenced for the moment. 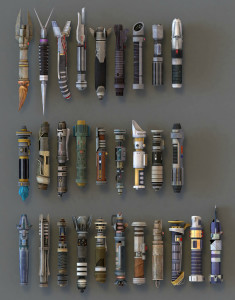 For the Jedi, a lightsaber is an extension of whoever forged it. It is very important to them, and they surround themselves with several rituals. For example during the manufacture of the weapon. Or even for the choice of crystal. There is even one when two members of the Order swear friendship by exchanging their respective creations. For the Sith, a lightsaber is like the Force: a simple tool. Besides, they have no friends. The only affection they can have towards their weapon is that which one has towards its signature. And in the end, whether for one camp or another, that's how we would qualify this element that we make ourselves.


SWTOR - Kill Them All: Quesh ❯