A blaster is a ranged weapon that generates particle beams from an interchangeable battery. Its rays of compact, highly concentrated energy of intense light can kill, injure or paralyze temporarily depending on their programming. It is the most used weapon in the galaxy, easy to use. It can be found in the form of pistols, rifles (different types), personal cannons and even heavy ship weaponry. The oldest recorded model dates from the Infinite Empire of the Rakatas. And it was a much more developed weapon than what can be found today in the days of TOR. The term blaster is regularly replaced by laser in many mouths. Technically, it is the same particle beam technology. However, as a weapon, the second is much older than the first. We could even say that the blaster is an evolution of the laser, with better batteries, the ability to aim further and more precisely, etc ... 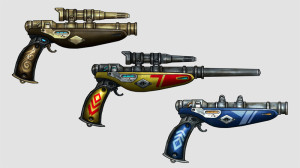 A laser shot generates a solidified bar of light. Finally, when we talk about light, it is by default the closest comparison. Each of these bars has absolutely the same size, density, amplitude. They are therefore all identical. All those that come out of the same generator and same alignment are. But to get this result, you need a medium, a special substance. The most commonly used is Tibanna gas (in Episode V, Cloud City of Bespin is one of the main export points for this gas). To do this, it is necessary to excite the atoms of this medium until they "jump" to a higher level. Then, when they return to their natural state, a photon is released. It is these bundles of energy that, properly moved, inflict the damage. Some sniper rifles are equipped with a special gas that makes their shots invisible. But it is a very rare equipment and to be handled with care because it is very volatile. Especially if you use a portable shield and a sound attenuator at the same time. Common equipment for a sniper.

The blaster is an improvement on this old model of laser. Its radius is much more concentrated and efficient. Much more deadly. The energy required to fire depends on the model. Plasma blasters are among the most dangerous, their very high heat ionic gases are even capable of melting the carcass of droids. We therefore find them regularly to equip armies. The medium gas passes from one chamber to another to mix with the plasma and thus become the deadliest blaster fire. High particle blasters are just as effective except against armored combat droids. They are the most common and shared model because they require much less gas to transform the shot and therefore their batteries last longer. Finally, there are the particle blasters, where the gas passes through a special chamber called Xciter for a shot of very intense light and very concentrated damage.

Most personal blasters have two types of ammo to deal with: a gas cylinder and an energy battery. To weaken one, it suffices to decrease the quantity of gas and vice versa. Which comes in handy for many criminals who want to illegally increase their damage. Be careful with the oldest models, they do not always meet the same gas / energy ratios as the current models today. There are also special weapons, such as wookie crossbows, which follow the same basic principles but whose effects differ too much to be modified in the same way. Thus, wookie crossbow bolts are more powerful and can bounce off more surfaces to inflict more derivative damage. To do the same, a normal blaster should be placed at close range. Afterwards, we can add around a whole bunch of gadgets to differentiate them, from the special gun to the larger battery. But the basis of operation remains the same. 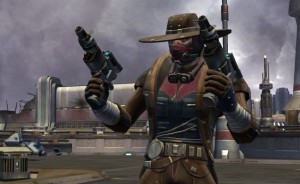 The article which served as the source was drawn from the official Star Wars "Essential Guide" series of encyclopedias.