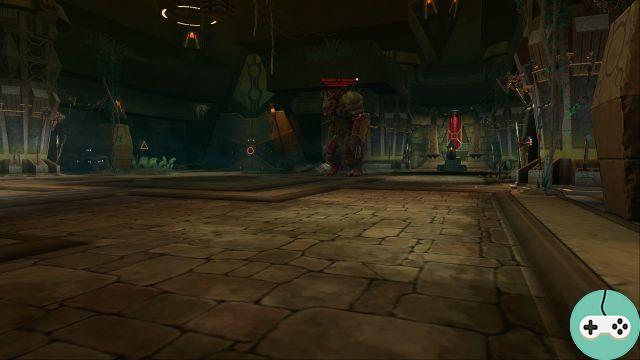 Malaphar the Savage is the first boss of Operation Temple of Sacrifice. Combat is pretty basic and mostly involves staying in your circle in order to increase damage and deal with adds. 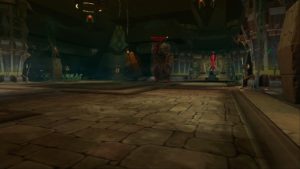 In story mode, the increase in damage received per unit of Savagery is rather low, it will be appropriate for everyone to regroup behind the boss and not worry about the number of accumulations of the debuff. However, if your healers start to have trouble keeping you up, you will have to say goodbye to your big numbers and quickly get out of the circle in order to completely lose your accumulations. Here's what the two debuff looks like:

The first additional enemies arrive after 30 seconds of combat and systematically in the same location (at the back to the right of the room compared to the entrance). The following adds will arrive 50 seconds later. The second and third pack arrive in the left corner near the entrance. The fourth pack arrives at the back left of the room compared to the entrance. Finally the fifth pack arrives at the same place as the first. In story mode, you should have killed the boss before you saw any enemies arrive. Here are these explanations in pictures: 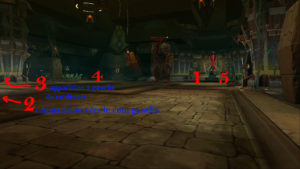 Whenever the enemies arrive, Malaphar will grab a spear and throw it at a party member. A red circle will then appear under a person in the group. It is imperative to avoid this circle, the damage can be fatal with 20 or more charges of Savagery. To do this, you have to move as fast as possible until the circle is fixed to the ground and only stop once you are out of it.

The ideal is to place the adds in the circle in order to literally slaughter them (because they also take damage from this AoE). Monsters are also thrown into the air for a second. If all goes well you should see something similar to the two images below. 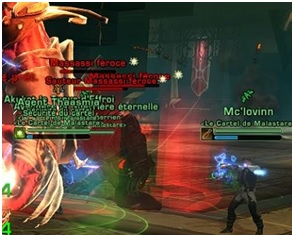 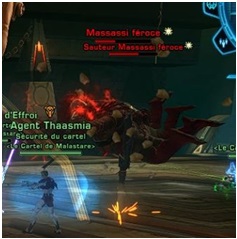 The 3 adds spam the boss's standard attack, so it will be up to the second tank to take care of it as little as possible to avoid unnecessary damage. The trick is to tank them as close as possible to the red circle without getting them inside in order to facilitate the placement of the spear without their damage increasing.

Once the boss is killed, you will be entitled to his loot:

Are you going to have the chance to get the random items?

Add a comment from SWTOR - Temple of Sacrifice: Malaphar (History)