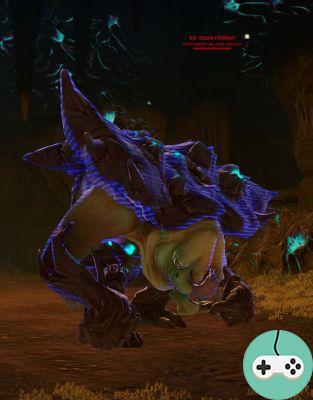 The Sub Ranger is the third boss of Operation Temple of Sacrifice and is currently the real challenge of this operation. Between the adds, an irreproachable placement, a rather short enrage and its many bugs, this boss may cause you some problems. Note that between the writing of this guide and its publication, patches may have been applied to correct the bugs.

The essence of the fight is based on the following facts: dealing with the adds before the collapse ends, then hiding behind the stones during the furious storm and finally positioning yourself perfectly during the rampage. 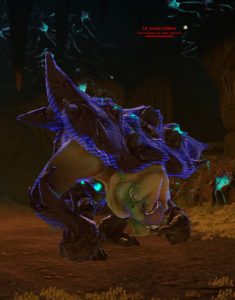 The sub ranger has different abilities that you will need to identify in order to master the course of the fight:

Catapultage : Basic attack of the boss which consists of a rock throw at the tank, the damage is not too much of a problem in normal mode. 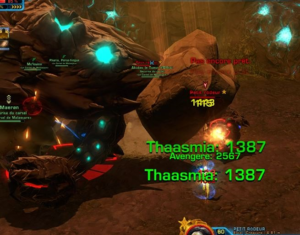 The Little Rovers : 3 in number, always in the same position. They still spam the same attack causing low area damage (~ 840 / add). On the other hand, all people in melee will receive in addition to area damage, melee attacks. In short, the closer you are the more damage you will take. 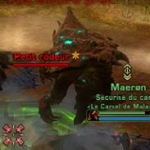 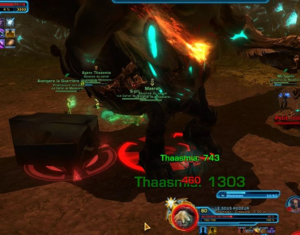 Furious storm : Occurs immediately after the end of the collapse. Causes heavy damage to all people not protected by a block of stone. At the end of the channel, all players suffer a slight damage and are knocked back. 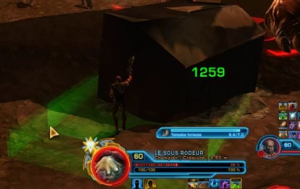 pillage : Place a pretty blue cross with the boss in its center. There must be a tank in front and behind him, as well as 2 DPS and a healer on each side in order to pass this passage. Failure to set up will result in a big cold sweat at best for your healers and at worst the death of one or more members of the raid. 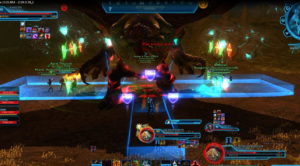 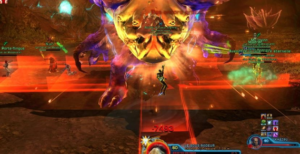 The combat is quite linear, repetitive but requires organization in order not to hit the boss's rage which is located at 4:30 minutes from the start of the fight.

The first 3 adds appear after 15 seconds of combat. During these first 15 seconds, it is therefore naturally a focus boss that is set up. When the adds appear and depending on the composition of your group, the Melee will kill the add closest to them then come back to the boss, while the distant ones will take care of the remaining adds.

Shortly after, the boss will start to channel the collapse, logically you should only have one little ranger left alive at this point. The goal is to have killed all the adds before the collapse ends. At the end, everyone hides behind a pebble, preferably the same in order to facilitate the work of the healers and wait for the end of the Furious Storm. The latter ends with a bump that it is advisable to undergo in a tank so as not to cause a bug in the placement of the boss.

Once completed, the group must quickly position themselves to prepare for the rampage and its famous cross. If all goes well, just chain these different phases to overcome the boss.

Throughout the fight and on a regular basis, the boss jumps on a random member of the raid.

If enrage is a problem for you, it may be a good idea to leave the last add group to focus on the boss.

As long as the various bugs are not fixed, here is a method used to limit the impact:

The main tank always chooses a pebble opposite to the raid and does not use an immune power against the final bump. In fact, the boss will necessarily jump far from the tank and will have to come back to the latter to start his rampage.

For the other members of the raid, it is therefore important to group yourself on the same block of stone, and to quickly move towards your tank while the boss jumps on you. This gives you plenty of time to position yourself.

Regarding the display bugs of the cross, there is no miracle recipe, except that the vision of the main tank is always the right one, so try to take a look at it to see if your position is generally correct .

Note: Following patch 3.0.2a, a new patch has been implemented to prevent a bug and the rampage has been corrected in the previous patch.

For those who will have the chance to fall this boss, you will be entitled to the following loot:


Do you want to be up to date and know all the tricks for your video games? In gamesmanagers.com we enjoy playing as much as you do and for that reason we offer you the best tricks, secrets or tips for you to play non-stop. We offer you quality content and always updated to keep you up to date. That's why, in our website, you will find not only videogame guides but also tricks, secrets and thousands of tips so you can play to the limit. Are you ready to get it? Enter now and enjoy your videogame!
WoW - Farm: Work Orders ❯

Add a comment from SWTOR - Temple of Sacrifice: The Under-Ranger (Story)