Hello everyone, I am Roxa, the Raid-Leader of the guild Team Goldo at Darth Nihilus. We do PvE HL in a relaxed atmosphere but with efficiency, and with that in mind, I'm going to tell you about the Maverick specializations that I have been playing as the main character since the game was released. And you will see, if like me you have Believed that the Precision specialization was the best in single-target dps, there are some surprises!

I suppose you already know how to distribute your talent points and play the specializations concerned, my goal is to shed light on the effectiveness of these three ways of playing when you master them correctly. The dps measurements are carried out with SOON-party, which is, to my knowledge, the best tool to have a "hot" measurement in Operation. Unsheathe your blasters, let's go! 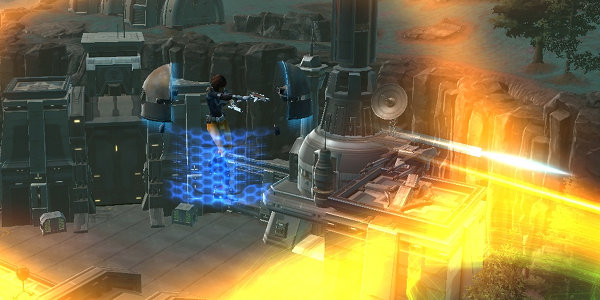 Roxaline trains above the Kephess fort in Denova (without special effects)!

Reading the talents, we say to ourselves that this is THE specialization for making single-target dps in operation ... Well, it's an idea that does not stand up to tests for long.

Cunning shot, Double shot et Accurate shooting MUST be triggered and used as soon as available with this priority. The Cargo XS should also be dumped as soon as possible.

We will not forget to constantly refresh the Sweep shot which can be wedged in the movements. Otherwise, in motion, we will place a Decisive shot which remains the most effective.

The specialization is interesting to play because it is necessary to "make proc" the shots with the best possible timing and the reduction of the timer of the. Cargo XS is appreciable for zoning. On the other hand, the dps is very inconstant and the management of the energy rather tricky. We yoyo between hallucinating and very disappointing figures to reach on average over 5 minutes a small 1580 dps on operation boss dummy.

This specialization seems tailored only to zone with formidable efficiency, but it is more effective in single-target dps sustained on a boss than the previous one.

At the heart of this specialization is the Saboteur's Charge Incendiary Grenade and the Electrical charge to be placed as soon as available. Be careful, sometimes the Electrical charge is available when it is not finished on the target, in this case, do not be fooled and put it down for nothing.
Once these priorities have been set, we will send a Double shot and one Accurate shooting when they are ready. Likewise for the Cargo XS.

There is no spell to "trigger" here like in the Precision specialization, which makes the gameplay more immediate and "flowing". Energy management is easy if you use Sabotage => Cold head intelligently. In addition, for mobility, you have 3 Quick shots free at the end of the blanket (6 sec in reality), but it is often better to put the Sweep shot Electrical charge or even a Decisive shot, unless you are low on energy (rare).

In the end, with sustained dps over 5 min we get a good 1680 dps on an operation boss dummy, which is starting to look very good ;-). And of course, an incredible zoning power, your tanks will crack on the adds of Kephess HM!

This time, we read the talents and think it's good for PvP, and on paper nothing looks terrifying. And yet it is by far the best specialization for single-target dps in operation!

Everything revolves around the 2 DoTs to keep permanently on the target (except at the end of a Double shot). It's easy to explain and play: Shrapnel (watch out for this zone shot) + Decisive shot, the two are synchronous so it's easy to manage. Be careful, you have to watch the DoTs and overwrite their "reduced" versions which are activated at the end of the main effect.
Then as soon as available: Injury shots (with its brutal animation!) and Hemorrhagic stroke. We fill with Double shot in priority and Accurate shooting (be careful 2,5 s to plan without moving).
Energy management is quite simple if you think about outlawing Burst charged and we run some Tues and salve to save money. Note that you are not obliged (but we can for "burster") to launch the Cargo XS as soon as up in this spec, which saves you the big hole of energy always difficult to fill.

In motion, we always think of the Sweep shot or to refresh its DoTs. Note that the cover is not essential for some shots but you still have to stay still to shoot them. Multi-target dps is good with the combination: Cargo XS + Shrapnel + Thermal Grenade.

In the end, on average over 5 min, we turn at 1750 dps always in the same conditions with an end-game stuff. So contrary to appearances,

the Perfidy specialization is recommended in Operations!

Thank you for your attention, and I take this opportunity to remind you that the Team Goldo is always recruiting a mature, efficient and motivated DPS to continue cleaning Denova HM while waiting for the next Operation!

The Force is good, a Blaster is better, and two blasters is twice as good? !

SWTOR - The forum has arrived .. and the rest!

SWTOR - Extension: details on the US forum