SWTOR - The Hermit: Tips for Beginners 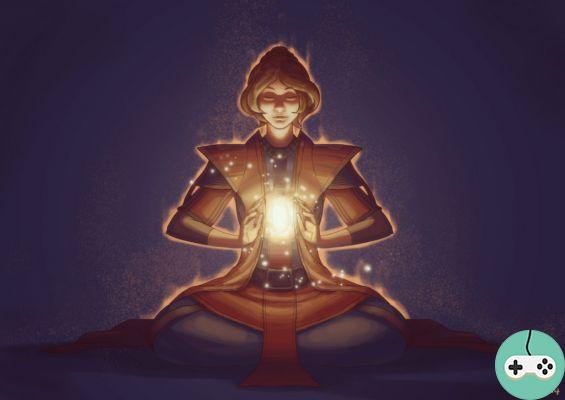 The Hermit is a new series of articles which aims to explain in a simple way different elements concerning the way of playing of HL players (for high level in English). We will discuss different points of view: solitaire strategies, group techniques, discussions on equipment, the usefulness of certain powers as well as some class guides to start the game well. I choose to start this series of 'article because I have too often seen players who do not know the basic game techniques being insulted at all costs, but has anyone ever taken the time to explain, advise them, tell them what's wrong with their way of doing things?

It is very important to warn other players if you do not know the strategies. The classic "Ha good? But I didn't know?" is not. You do not know what to do ? Are you up against a boss? a ZL? an operation ? If this is your first time going or you have doubts about what to do, you absolutely have to say it. This will give you a little more recognition from other players who will generally rather explain things to you than die stupidly because you didn't understand.

Consider your class and equipment. Don't know how to play your class? Many guides appear as the changes made by the developers. Take the time to read them. Find out even a little bit about the order in which you should cast your spells, it will appear less ridiculous in the eyes of experienced players.

If you have access to Operation or Warzone rewards, think about or ask around what set bonuses are right for your class. For example, there is no point in taking a "Force Mystic" (Healing Sorcerer) set bonus that affects spells you don't have if you are playing a Lightning Sorcerer or Madness or worse an Assassin. You can also refer to the table below to find out which set bonus is right for you. 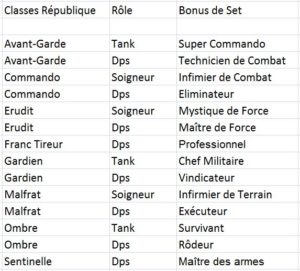 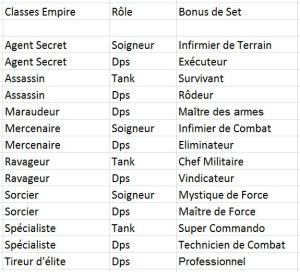 The roles of the players in a group are divided into three roles:

The main objective of the Tank is to maintain the target of a boss on itself and to absorb as much damage as possible. Three classes per faction can play this role.

To do this, they have a hidden value (because it is not displayed in-game) called “threat” or “aggro.” A boss usually targets the person with the highest threat. of all party members. The threat increases according to your damage and your spells generating it. To identify them, just read their descriptions, whether for spells coming from disciplines or powers of specializations.

In addition to these threat-generating spells, you also have two spells called "Taunt" (taunt). Both of these spells are meant to make the boss target you even if you don't have the highest threat. Taunts are divided into two categories.

To absorb or reduce damage, Tanks have specific equipment. Their secondary weapon must absolutely be a shield generator. In addition, they have several damage reducing spells. These spells are called CD. They are to be used during phases where the healers cannot keep you alive on their own, but never all at the same time.

The main objective of the Healer is to heal other players, and more particularly the Tanks. It is he who keeps you alive during a raid. For this role, three classes are available in each faction:

Each class has its advantages and disadvantages. The objective is not to compare these classes, we will be satisfied with the mechanisms common to these:

All classes in the game can choose the role of DPS. They aim to kill their opponent, although other classes can also do it but less effectively. We separate these classes into two categories:

Certain game mechanics are good to be mentioned here, although they are not to be applied in all cases, or can be applied by other roles.

And let's not forget, these mechanisms are not exhaustive and may be valid for other roles!


Do you want to be up to date and know all the tricks for your video games? In gamesmanagers.com we enjoy playing as much as you do and for that reason we offer you the best tricks, secrets or tips for you to play non-stop. We offer you quality content and always updated to keep you up to date. That's why, in our website, you will find not only videogame guides but also tricks, secrets and thousands of tips so you can play to the limit. Are you ready to get it? Enter now and enjoy your videogame!
WoW Mount Guide - The Glowing Stone Drake ❯

Add a comment from SWTOR - The Hermit: Tips for Beginners