The Cataclysm expansion introduced rare new elites such as the Time-Lost Proto-Drake. Among them is Aeonaxx who is guaranteed to drop a mount: the Phosphorescent Stone Drake Reins.

Aeonaxx is a rare monster from the Cataclysm region Deepholm which gives 100% a mount: the Phosphorescent Stone Drake Reins. This one has 387 health points. Its main feature is that you have to climb on its back by clicking on it. Indeed, when you hover the mouse over it, a green arrow will appear, it is the same when you want to get into a vehicle.

If you are above level 90, Aeonaxx will drop very quickly and you will have no difficulty killing him. However, if you are below level 90, I recommend that you be careful: this one calls for allies, little dragons are coming towards you to kill you. They don't have any special attacks, but if you don't kill them they will grow in number and it can be dangerous. So I recommend that if you are below level 90, take the time to kill these dragons.

The mount stripped down on Aeonaxx.

Aeonaxx spawns, along with the Time-Lost Proto-Drake, 2-4 times per week. Unfortunately for us, no theory has been put forward, so Aeonaxx is believed to appear completely random and unpredictable.

Finally, Aeonaxx flies high enough, to give you an idea, it is about the height of the entrance to the Heart-of-Stone instance. So remember to climb high so as not to waste time! 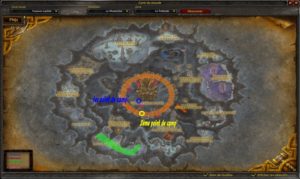 Finally, on the map, you can see red spots: these are the places where exactly Aeonaxx appears. And, as you can see, we always place ourselves between two red spots. As a reminder, these tasks are the result of the NPCscan Overlay add-on that you will find later in this article.


Tools to facilitate obtaining the frame

There are several existing add-ons to help you on your journey. These allow you to detect, target and indicate the path of the various rare that are in the region where you are:


I wish you good luck in your adventure!