I recently told you about the Jedi Initiates, who end their group formation with trials. Because the vast majority of Jedi stories speak of grandiose successes, we often forget that there are failures. 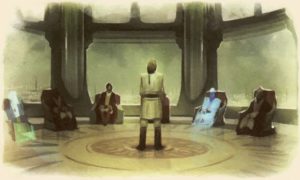 Passing the Initiates tests does not guarantee that you will become a Padawan. Once past, they allow especially the Jedi Knights, and the Jedi Masters, to be interested in them, and perhaps to weave bonds (social as by the Force). But it doesn't necessarily turn out like this. Many repeat the next session. And again to the next one ... however, the Reassignment Board has to judge at some point whether this is in vain or not.

The Reassignment Council manages the careers of Jedi who did not become Padawan, assigning them to the Jedi Service Corps. Managed by this same council, it is divided into four branches: the Agricorps, the MedCorps, the EduCorps and the ExploCorps. Although they are predominantly made up of Jedi who have failed several consecutive initiates, many Jedi - not just novices, but also Padawans, knights and even masters! - decide to join the Jedi Service Corps, because they have faculties in direct relation, because they feel there in their mission or by passion. And to refuse talented and passionate people would be sheer madness. 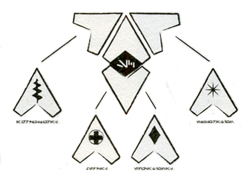 Le Agricultural body (or Agricorps) is the most important branch, in terms of workforce. The Jedi concerned use the Force to nourish, maintain, or even control the growth of plants. The Living Force is thus very present among the Jedi, and their adversaries are not people, but the evils of nature (drought, storm, disease ...) which eat away at the biospheres. And although they are affiliated with the Agricultural Administration of the Republic, they remain Jedi and obey the Order (and not the government, like officials). To be exact, they are ruled by a Council of Jedi Masters with strong ties to nature and the Living Force. So much so that they are often taken as an example in the courses - when it is not a question of entire stays - in depth on this aspect of the Force.

The AgriCorps is divided into sub-branches with specialties (eg Jedi Geologists) catering to the needs of large-scale Agriculture. Because the plant cycle is extremely slow, the Jedi particularly oriented towards meditation find themselves fulfilled by joining the Agricorps, especially since their career in this body is often very long.

Le Medical team (or MedCorps) is much more restricted than the AgriCorps. He sits at the Jedi Temple on Coruscant *, but his medical services are so extensive that there are non-Jedi patients there as well (usually severe cases that traditional hospitals cannot cure). But this is not the only task of the MedCorps healers: playing, like the Jedi of the AgriCorps, on the growth and regeneration of healthy cells, they are regularly sent across the galaxy, to places in disaster situations or conflict.

Many consular Jedi who become healers have the same skills as members of the MedCorps, and can thus fulfill the same role. This is why this corps has a much smaller staff, and is generally only required for complex or specialized situations.

* therefore, probably on Tython since it was moved, compared to TOR, before returning to the capital before the prelogy. 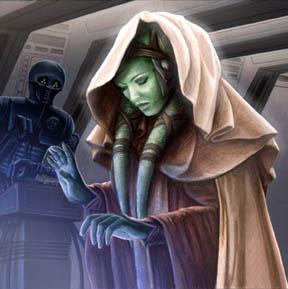 The third body, theEduBody (For Education body) also has a limited number of Jedi: any Jedi must be able to teach, so why make them specialists? The archivists, intellectuals, librarians and teachers of the EduCorps go beyond the usual teaching of the Jedi. Translating, transcribing, categorizing, cataloging, classifying and indexing knowledge, such is their task, on a considerable scale. And only they, and not droids, should and can do it: holocrons and other artifacts are only accessible to Force adepts, and the faculty of interpretation and understanding is obviously more important than in droids. .

Although inconspicuous, the films seem to offer an example of a member of the EduCorps, namely in episode II "Attack of the Clones", when Obi-Wan searches for the planet Kamino, and a woman comes to him. returns curtly: "If a planet is not listed, it is because it never existed". Although this sample of a somewhat haughty Jedi librarian is not very flattering, it should be noted that humility is a quality appreciated and sought after among future members of the EduCorps.

Finally comes the Exploration Corps, L 'ExploBody, the fourth and last service corps. In terms of area, it is the largest of the bodies, since it covers a whole part of the galaxy. Its members rarely pass through the Temple (apart from the great masters who run it, who remain in the Council), and are strewn in Regional or Ordinance Depots (DROs) across the stars. From its outposts, the ExploCorps teams prepare and refuel, before boarding long-range reconnaissance vessels or Praxeum * vessels; setting off through the stars in the hope of making the first contacts with all new species, new planets, even new relics and monuments from times past.

Because they are often in contact with foreign cultures, and sometimes hostile towards foreigners; this is the service corps which brings together the most voluntary Knights and Jedi Masters, to have sufficient defense force - we can even assume that the Jedi who did not succeed in becoming Padawan, and who joined this corps, are on average more able to fight than their colleagues elsewhere.

Their status putting them forward for all discoveries, the ExploCorps is linked to the Reconnaissance Corps of the Republic as well as to the Intergalactic Zoological Society. In addition, the Archaeological Academy, a sub-branch of the exploration corps, regularly transmits its relics to the EduCorps, the latter eager to study them.

* It is quite possible that these vessels did not yet exist at the time of TOR. In any case, the Jedi of the ExploCorps leave in reconnaissance corvettes (not a simple personal hunter, they act in groups), and have flying academies in which the Initiates of the ExploCorps study. 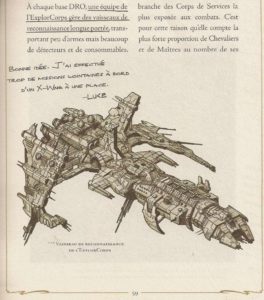 But the fate is sometimes really not favorable to certain Initiates. Neither the path of the Padawans nor that of the Jedi Service Corps is open to them. With great regret, as this is always a loss, the Order can refuse an affiliation. Some even feel that the Jedi Path is not for them. These individuals leave the Order to return to civilian life, but the Jedi Council still insists on the years of learning they have acquired anyway: it urges them all to use, train, and derive benefits from the powers. and teachings transmitted. Moreover, its individuals can keep the title of "Jedi" at all. Although they are neither padawan, nor knight, nor master, the philosophy transmitted and this affiliation with the Force, however small, mark those who have been there.

Sources: WookiePedia and the Jedi Handbook.

ESO - TESO among "The most anticipated games" ❯

Add a comment from SWTOR - The Jedi Formation - The Reassignment