SWTOR - The Parsers: Installation and measurement of the kiki 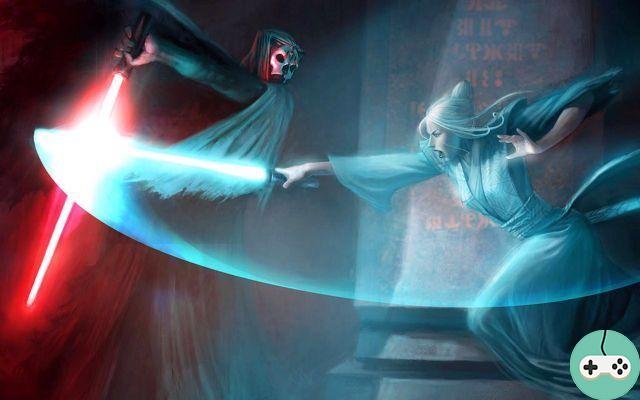 In the world of MMOs, if you want to optimize yourself, it is often necessary to assess yourself and know where you are. We invite you to enter the world of parsers and present the different tools at your disposal to measure your efficiency.

What is a Parser?

This is a very useful tool for a gamer. It allows, among other things, to measure:

It is therefore an essential tool for anyone wishing to improve and optimize their character.

Some Parsers allow the data of different players to be brought together on the same software: this is the Parse Raid.

To explain the different Parsers to you, I show you a Parse (I typed the dummy in the nawak way so as not to create controversy). We will differentiate between two types of Parsers.

The first are software to be downloaded in order to have a live reading of the game data. The software continuously reads the text file generated by the game in order to extract various data. The refresh is usually done every 3 seconds. There are at least 3 software. I will offer them to you in the order in which they appear: 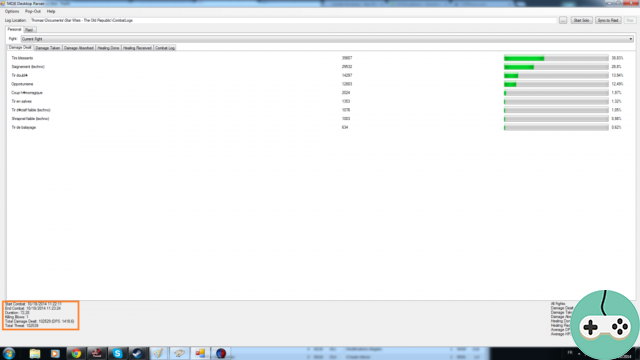 Its raid synchronization is quite painful (frequent updating of the raid key). In addition, it does not give any information regarding the critical rate, miss rate and average damage per spell. 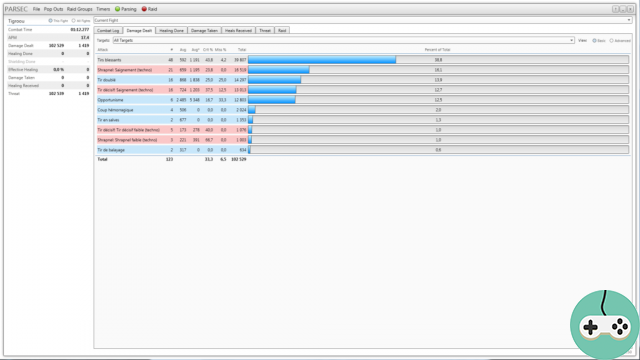 This is the leading software for the moment. For about a year that it has been around, it has been regularly updated and has some cool features. It has integrated a summary of our character on the left which remains in all circumstances, as well as a very detailed combat log tab compared to Mox Parser. This is very useful for seeing the effects of relics / buffs / debuffs. 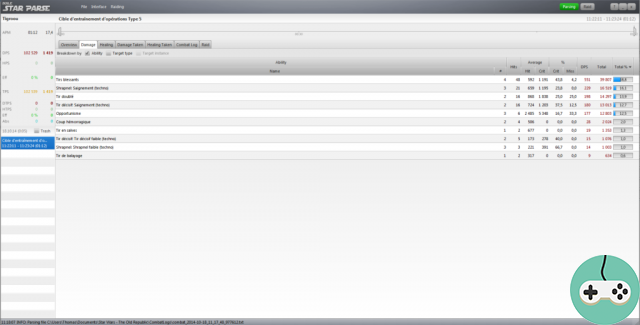 This is the new kid that came out a few months ago. For me it is the best Parser currently. 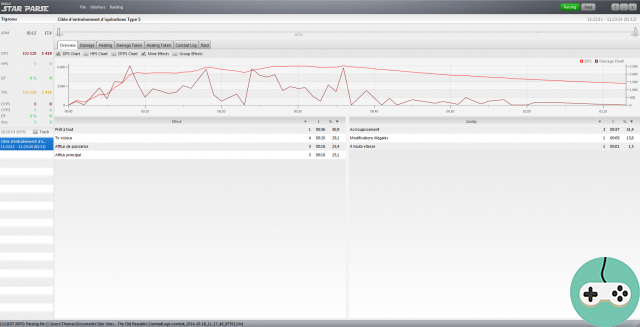 It has two additional features compared to Parsec:

Its real advantage over other Parsers is its ability to split the log over time.

I'll take a concrete case for you. During the fight against the Dread Council in Nightmare, the DPS in phase 2 is critical for the success of the fight. It was necessary to optimize the placements, the cycles in order to do as much damage as possible on two enemies. Being able to isolate certain phases of the fight was very helpful. So this software does it by itself.

Here is the log for you to realize it: 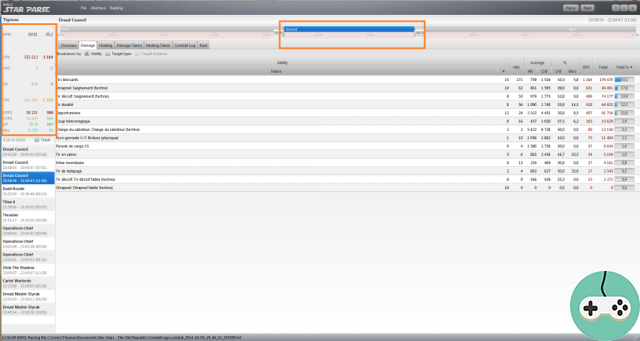 This ability to isolate parts of the fight is reused in the Parser functionality: "Interface> Raid Challenges". When you synchronize in a raid, StarParse identifies the critical phase and displays the different DPS of each member of the group on that phase. This is displayed in a pop up window.

In combat you will therefore have 3 useful pop-ups: "Raid Damages (total damage on the fight), Raid Challenge (which will give you the DPS of each on the critical phase) and Raid Healing (Average healing over the entire fight)".

The second types of Parsers are sites specializing in hosting combat logs. I will present the best known and most used of all to you:

For someone who just wants to work on their character, TorParse doesn't really have much use compared to StarParse. It does not give real time data. The huge advantage of this site over software is its database. When you are looking to optimize your characters, you will be able to find the logs of other players on this site. They just need to upload their logs to the site and you can find them.

The information extracted is interesting and allows you to improve your cycle, to see if their parse is exceptional due to their critical rate etc ... We can thus see the log in detail of another player. Something impossible with live software.

The big black spot (we can call it a chasm now) is its offline status for over a month ... I apologize therefore for not developing on this theme.

How to use this software

In the SWTOR game settings, you must activate in Settings / Combat log / Activate the transfer of combat logs. Then, in the software, you must select the My Documents / Swtor / Combat Logs folder. You must then click on the "Parse" button.

The raid tool is fairly easy to use in these 3 software: you have to create a group with a password and then distribute it to the members of the raid.

To study the post DPS, namely the ability of his character to optimize and hold the cycle, it is customary to type around 5 minutes on a training dummy.

To publish and share your Parses, it is advisable to get on your ship with the Operation Training Dummy which has an armor debuff and 1 million health points (which can be purchased from the little droid, available in inheritance releases).

The optimization of the post DPS is linked to different factors:

Currently, there are two viable software programs for studying Parses. Parsec is the most widespread and known to gamers. StarParse is better but still unrecognized by gamers. It will replace Parsec in some time thanks to its greater utility in raid.

The TorParse site (when it becomes available again) remains the largest database for combat log analysis.


Do you want to be up to date and know all the tricks for your video games? In gamesmanagers.com we enjoy playing as much as you do and for that reason we offer you the best tricks, secrets or tips for you to play non-stop. We offer you quality content and always updated to keep you up to date. That's why, in our website, you will find not only videogame guides but also tricks, secrets and thousands of tips so you can play to the limit. Are you ready to get it? Enter now and enjoy your videogame!
The Sims 4 - How to die? ❯

Add a comment from SWTOR - The Parsers: Installation and measurement of the kiki