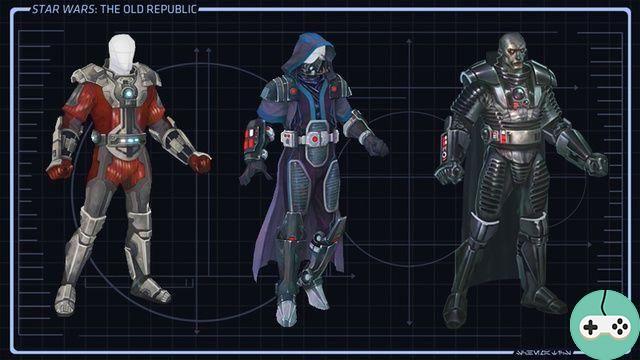 Hello everyone, I am Kishekzun from the Imperium guild on Mantle of the force and today I am going to offer you my guide on the Rage specialization of our dear Ravager.

For our Guardian friends, you can find the transcript of this guide here.

This guide is mainly PvE oriented. This specialization has long been considered useless in high-level PvE (I admit that I thought about it for a while too!) But is quite useful on some bosses, especially on new operations.

Here is a small list of affected bosses (in my opinion): 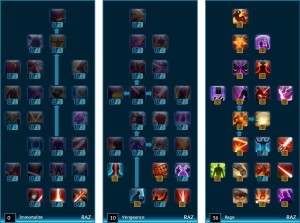 The rotation is not very difficult, indeed it is rather an order of priority depending on your skills which are being recharged.

It is imperative to keep the target under the armor reduction granted by theFatal assault.

La Vicious slit : In Shii-cho form, this skill will allow you to reduce the cooldown of three of the skills: Extermination, Enrage and finally the most important Choc. It is therefore imperative to launch this skill as much as possible to be able to chain as many Force sweep. In addition, your tree gives you a critical bonus and a small damage bonus on it, so do not deprive yourself of it.

Try to make the most of the Exponential power. In fact, try to launch your Force Cries et pillage when you take advantage of the 9% bonus damage. As I said before, your cycle will not necessarily be fixed and often, the pillage will be charging, take the opportunity to launch Fvicious entes.

Here is a typical diagram of a rotation:

Then spam the Vicious slit, a little Fatal assault to boost Focus and refresh Armor Reduction.

You just have to spin this as much as possible.

I will offer you here my vision of "good equipment" to address this specialization.

Important note: my character is now full 78 (implants and non-token headset), so your stats may differ if you don't have that much equipment, but the principle remains the same! 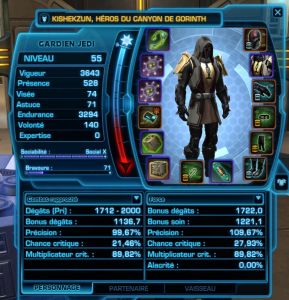 The statistic to be mounted in priority is theInflux. Do not go below 86%, which is quite possible in full 72, quite accessible nowadays.

You can see I put in a critical / influx sophistication. Indeed, a small bonus of criticism is never lost, however I allowed myself because having a lot of vigor / power due to my equipment, for a lower level of equipment, privilege a sophistication power / influx instead .

I didn't put 100% precision to gain influx as well, I think with an equipment level 72, it might be complicated so once again, focus on power / precision sophistication.

For this specialization, I'm not using quite the same relic setup as in Vigilance. I keep theUnexpected assault, essential, but I prefer the Power clickable instead of the Force Damage relic.

Indeed, thanks to this specialization, you have greater control over your burst phases. The Relic can be activated Power is therefore much more profitable than in Vigilance, where you are dependent on proc!

You can see that this spec does less single-target damage than Vigilance but is still very viable! Anyway, it is not made for pole bosses, but for bosses with a lot of addons, to kill quickly.

Once again I recommend that you learn these two specializations: Vengeance for bosses without adds, with a sustained single-target dps and specialization Rage for the bosses I mentioned in my introduction.

After that, it's up to you to play the one that suits you best, the main thing is to have fun!

Here is for the last word, I hope you enjoyed this little guide, if you have any questions feel free to ask them, also if you do not agree with certain things, express yourself. to benefit as many people as possible!