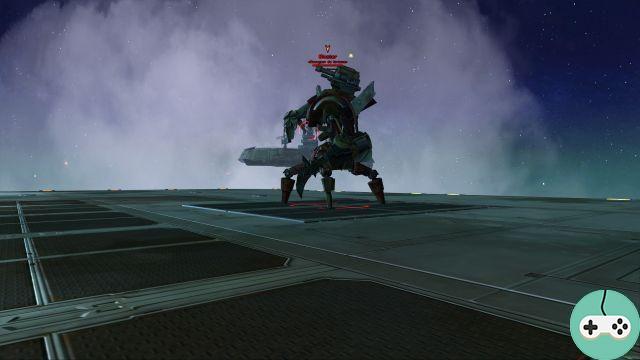 Sorry for the time between the two guides. So we meet for the fourth boss of Operation Ravageurs on a duo: Blaster and Master.

Super Ravager Scrap Cannon : This attack is characterized by a large red area forming an angle of about 150 ° in front of the boss. Anyone in this area will be pushed back approximately 20 meters.

Thermal mortar : the boss will place 4 orange zones distributed over the combat zone. These zones, initially quite small, will gradually grow until they become immense AoEs measuring more than 60 meters in diameter. This therefore greatly limits the space. Anyone inside one of these areas will take damage (4k5 / s). 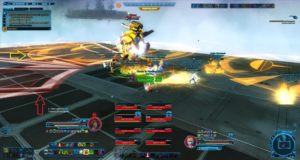 Resonant explosive probes : The boss places 4 probes on members of the raid. The target gets a debuff and a white circle appears around it. At the end of the debuff, the probe explodes. We must avoid taking the damage of several bombs. 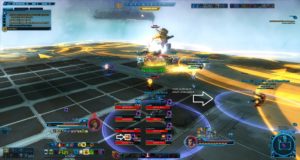 This boss has low health points (100k) but has a buff that reduces damage by 90%. So it will take a fairly large amount of damage.

The fire wheel of death : This little astro-mechanic begins to whirl around, producing flames. Anyone in the area will take damage and be slowed down. During this attack the boss goes towards the person who has aggro. He must therefore be removed from the raid. 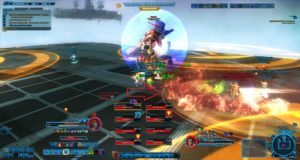 Powerful ion cutter : This attack is characterized by a laser targeting the person with aggro. The person hit by this laser gains a debuff that stacks at the rate of one unit per second. Each unit increases damage received by 100%. To prevent the second tank from taking all the accumulations, the laser must be intercepted by placing one or more DPS between the off-tank and Master. 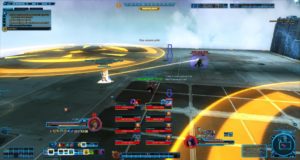 Rain of pain : At this point, Blaster and Master gain a shield that makes them immune to damage. Blaster will no longer bump. Master will take off to make a kind of bombardment characterized by a red zone taking half of the combat zone lengthwise. During this phase you just have to dodge these AoEs and continue to heal the main tank because Blaster continues to inflict damage on it. This attack only happens every 85 seconds, so you shouldn't see it twice. 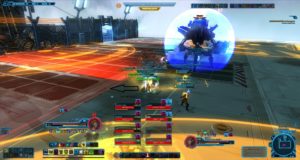 Ionic pulse wave : This attack looks exactly like the soldiers' pulse cannon. This attack does not hurt very much. It poses a debuff that the entire raid must have to avoid being thrown by Blaster's new attack.

Devastating Electro-Pulse : This attack will knock anyone without the Ionic Pulse Wave debuff. 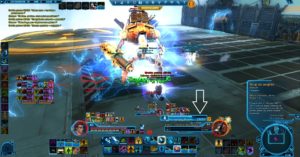 The fight is divided into 3 distinct phases.

During the first, only Blaster is present. The main tank therefore takes the boss's aggro and turns him back on the raid. The tank being regularly thrown, the aggro is quite delicate so the DPS must be controlled a little. During the first 50%, it will be enough just to avoid the large orange aoe and to disperse when the explosive probes appear. The tank is bumped regularly, he must be particularly careful not to be bumped in the orange aoe.


The second phase begins when Master is called. At this time, it is advisable to assign a healer to each tank. For the main tank, the job remains the same. For the second, the job is slightly more complicated. He must keep the little droid away during his fire wheel while remaining close to the group because at the end of his attack he will start his laser. It will therefore quickly be necessary to hide behind a member of the group. Master connects these attacks in the same order: fire wheel-laser-small pause (where he only does his normal attack) -fire wheel… When he uses his "Rain of Pain" attack, everyone avoids the AoEs. because they inflict heavy damage (around 20K). During this phase you must continue to dps Blaster until it enters the third phase.

The third phase begins when Blaster channels the "Rearrange" spell. At this time, everyone can assemble in the same place because Blaster will no longer throw and Master will no longer make his wheel of fire. Everyone needs to get the debuff that Master gives. For DPS, you have to keep DPS Blaster until you get a new shield. At this point, it no longer takes damage, but it also does nothing. Everyone can therefore pass on to Master until the end.

There is a surprise at the end but will I let you discover it for yourself?

This boss is pretty straightforward as soon as the healers are properly assigned and Master's tank knows what to do. I would like to thank Sunie and Enderkeldorn for the screens

add a comment of SWTOR - The Ravagers - Blaster and Master (Story)