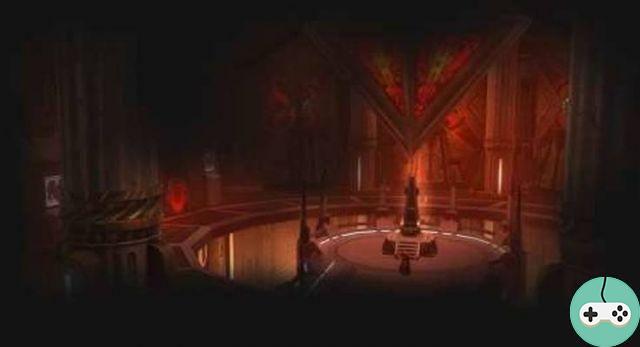 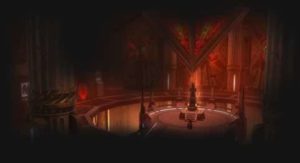 Launch hangar for the transport and disembarkation vessel (Carrick Station). 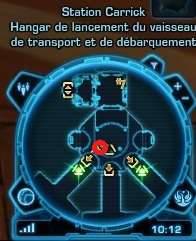 So we find ourselves aboard the Chandrila orbital station, disembarking in the middle of a fight from the start. The positive side is that you can let off steam on the first fight because if you die you reappear about fifteen meters away. You will therefore have around twenty enemies that separate you from the Red Reaper, namely:

... without counting the troops of the republic already present in combat.If you are used to using your CC (crowd control) and interruption, you will have no trouble fighting (always remember to mark your targets to avoid any often fatal confusion). 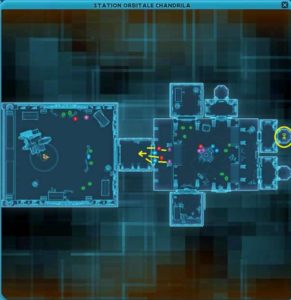 So here we are on the Red Reaper, as well as the first boss.

The boss (in yellow below) shows up with 6 hostages at his feet. The principle is simple: during the fight, the boss jumps on a hostage and throws on him drainage of the soul in order to recover life. You just have to interrupt it. 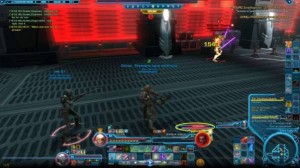 It also happens to jump north or south of the room to attack you via projections (1,3k / sec s / 5sec). 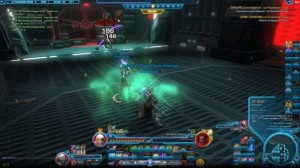 After the boss, continuing south, you will find a closed room on the left containing an elite (fractional reaper droid, 26 health points, in red on the diagram) with next to him, a battle droid (in gray) that can be repaired by players with recovery in the crafting profession. Remember to take care of it, it is always a useful help. Continue to advance by killing the few droids lying around in the next room until you reach a large room filled with containers ... and droids (pink). 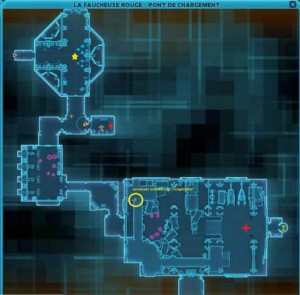 At this moment you will have the choice: either you cross the room by killing all the droids that you come across, or you use the elevator (which can be activated via recovery) which will make you take a different path, also containing mobs but less amount. 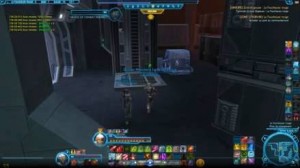 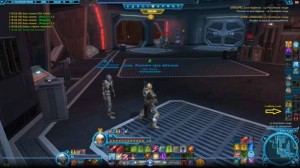 Once on the other side, you come to other elite droids accompanied by two turrets. The kings of the skip will be happy here because it is enough to pass to the side to avoid them. Then go to the command bridge where 5 enemies and the next boss are waiting. 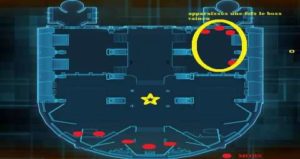 The principle is simple. On either side of the droid we see 6 holograms, 3 blue / 3 red (referred to here as the Sith Power Source), which we can click. On the boss, we see 2 improvements to 3 charges. No need to look far: during the fight, the boss takes turns launching his blue ray / red ray attacks (interruption impossible). Just click on the sources so that the dominant color is not that of the current / next attack.

To put it simply, personally, a blue ray with 5 blue charges did 9600 damage to me (3500 on HK). In 3 blue / 3 red, we drop to 1300 which is largely manageable. I therefore advise you to try at least to keep a 3/3, which avoids spending your time running. Also, when resetting sources, if they are red and it attacks with a blue ray… don't click? (pay attention to the timing of his attack). 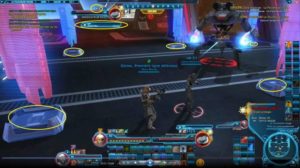 Once the boss is defeated, we are "attacked" by 5-6 Imperialists on the bridge and there is a console to activate. Once these matters are settled, head to the right where 4 droids (including 2 T7 units) will try to block your way. Access the Sith Shrine. 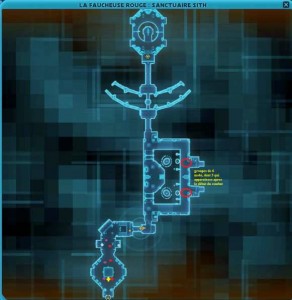 In front of you, a Sith crusader (elite with 24 health points) with a Zealot to his left and a Marauder to his right (nothing too bad). Then, a Zealot and a Marauder just behind the central pylon. And finally, a Marauder, a Zealot and two Sith officers (840 health points) in the tank room. Once everyone is on the ground, click on the console to start the next conversation. Small parenthesis in this regard, you will have 11 choices (to change) including 120 with dots on the bright side and the third on the dark side. According to the response given by the group: 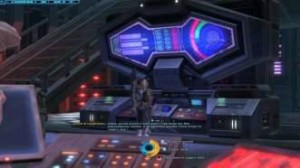 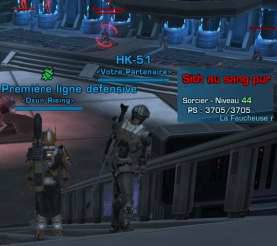 The rest of the path depends once again on you. If you have an archaeologist in your group, you can deactivate the laser and go straight ahead, by clicking on the command in the shape of the Sith holocron (the big pyramid), once the 3 Sith have been defeated of course (friend soldier, think of the push on the bridge ^^). Going through this path, there is an optional fight against several Crusaders and Mystics giving access to a "secure chest" and from time to time a good item on one of the Crusaders. 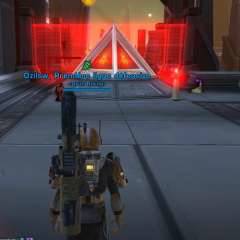 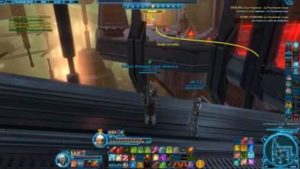 Without an archaeologist, the great turn to the right awaits you, with many more enemies and the same 3 Sith at the end, after the laser bridge. Here you are in front of the last boss. 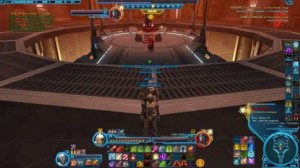 Here too, the technique is not very complicated. During the fight, 2 adds will appear (1 on each side). At the same time, the boss launches his Force bolt at you. At this point, all players must move so that the person targeted by the boss places one of the adds in the path of the lightning. The add almost launches an old terror loop that you just have to interrupt once the threat has transferred. 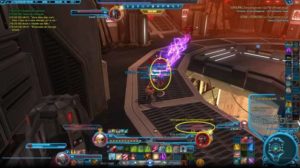 Ditto on the 2nd add, then back on the boss to burst;). I want to stress the the whole group moves, because often this phase leads to confusion simply because the person who takes the lightning runs towards an add, the lightning is transferred, the person then loses all threat (especially without attacking). It is therefore logical that the lightning strikes on a distant person, and therefore, on your colleagues. Repeat the operation and the victory is yours.

Voila, I am very happy to sign my first contribution, I hope you liked this little guide and especially that it will be useful to you. I will add a video later (solo ^^) because I think it is always easier in pictures!

Blast Out - Collect your key for Early Access! ❯