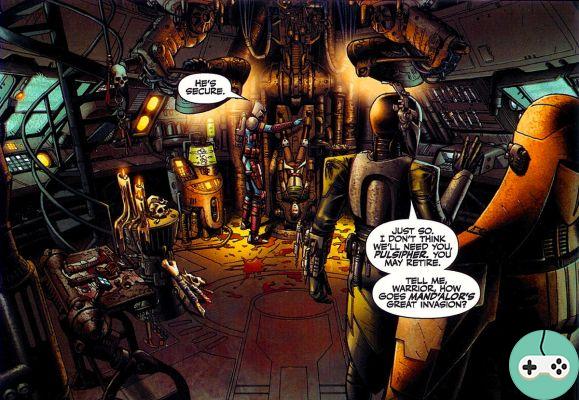 Antos Wyrick was a zeltron, a humanoid with dark pink or red skin. But his racial background never weighed in his life. He was raised at a very young age by the Iskalloni slavers, cyborgs who experimented with anything and everything on innocent people they captured. To survive, the child became one of their assistants, learning their methods and philosophy. He, who came from a very empathetic race, had to shut himself down completely and was later illustrated by his insensitivity. Then his life changed when the Mandalorians attacked his masters. Several of the slaves thus freed joined the clans in thanks. This is how he joined the allegiance that would define his life. Years later, many regretted his recruitment. It will end up among the list of examples from the past told to children. But not to encourage and motivate them. He's a legendary monster. His name is not repeated, and he has cast shame on any scientist the Mandalorians may encounter. Only his nickname is still known: Demagol, which means the tailor of flesh. 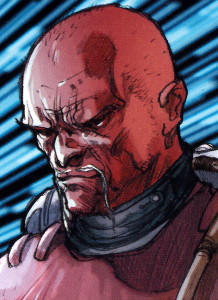 Among the Mandalorians, the young adult Antos Wyrick attacked their Mandalore chief a lot. The one of the time was nicknamed the Conqueror, and is very often regarded as the greatest leader who ruled the clans. But he was defeated by Ulic Qel-Droma, a Sith lord from the Jedi, and became his servant. How could the greatest warrior of this generation have lost like that? The zeltron did not understand. Was it due to the Force? He became obsessed with the subject, and reacted to it in the only way he knew: scientific research. After Mandalore's death in the war waged by Qel-Droma and his master Exar Kun, he drifted. He had stolen a tunic from Ulic, which had belonged to his Jedi teacher Arca Jeth. He tried to clone him. Failure. So he goes back to the old methods of the iskalloni. Associating with other unscrupulous Mandalorians and slaveholders, he founded the Osadia School. An orphanage where the children of his assistants and even his daughter Chantique were also raised. All subjects of his genetic experiments to create the conditions of use of the Force. He ended up asking more and more of his suppliers, got angry with them. Returning from a trip outside, he discovered that his base had been attacked and all the children had disappeared. Mad with rage, he returned to the Mandalorians. The new Mandalore, the Ultimate, was preparing a war against the Republic and the Jedi. Having the Force among his troops would greatly strengthen them, benefit them, and he agreed to fund Antos' research. The zeltron thus established himself as one of the two chief officers of the hierarchy, on a par with the military strategist Cassus Fett. He was conducting his experiments on Jedi prisoners, on the verge of torture. Which earned him the nickname of flesh-cutter, Demar'agol. And the galaxy would never call it Demagol again. 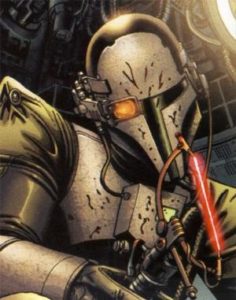 With the Flashpoint Republic station captured, he set up his headquarters there. Among his new prisoners, the apprentice the galaxy would soon know as Malak. His experiences made him lose all his hair, but also grow several inches. And he was one of the least transformed by this passage through his hands. Zayne Carrick having infiltrated the base, Demagol was captured and suffered so much damage that he spent several months in a coma. When he woke up, a trial was very quickly organized but he escaped at the first session. At least that's the official story. The Jedi Archives contain another. Carrick had teamed up with another Mandalorian, Rohlan Dyre. The zeltron drugged him and stole his armor to impersonate him. Not very difficult when you don't have to take off your mask. He remained in the entourage of the Jedi until he found traces of the children of the school of Osadia: Jarael the arkanian scion who was his best subject and Chantique his daughter who had become a slave. Favoring the first one that he thought the total success of his work, until providing him with the double-bladed lightsaber of Exar Kun. Zayne Carrick and Rohlan Dyre stepped in for the final act for some revelations. All the other children in the school had been killed by Chantique in her hatred against her father. And Jarael had no power in the Force, it was Demagol who had it and unconsciously gave the illusion that she was wielding it. In his deadly fight against his daughter, he finally used it on purpose, for him. He attempted to grab Carrick's lightsaber or Exar Kun's lightsaber. Unfortunately, it was the double blade that landed in his hand. He hooked up Chantique, but pierced himself in the same movement. He died instantly. 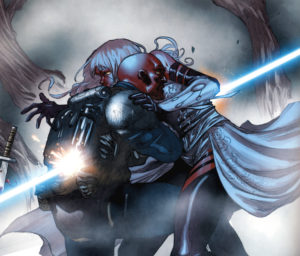 On many points, Demagol had acted at odds with Mandalorian ideals. In particular by involving children as subjects of experiments. Rohlan Dyre knew the truth and repeated it. Cassus Fett, who had helped Zayne Carrick in his last hunt, also had an interest in seeing his rival disappear and therefore did nothing to prevent this dissemination. Already very unpopular during his lifetime, once he died he became the embodiment of disrespect for the values ​​of armor. And since this butcher was a scientist and reacted regularly in this way, it is this whole community that is ostracized. No clan warrior would seek to embrace this path. And even though the majority of the galaxy has forgotten what was only a small detail, the Mandalorians still remember.

add a comment of SWTOR - The tailor of flesh