SWTOR - The Triumvirate of Malachor V

Darth Revan and his apprentice Darth Malak had fallen into the Dark Side due to the Emperor's tortures. When they returned to the Republic space, their memory was faded and anyone who joined them knew nothing about the Empire. When their two leaders left their ranks, the Sith they had formed found themselves on their own. They turned on each other until a master and his two apprentices imposed themselves at the head of the survivors. A trio that took in history the name of Sith Triumvirate. The Republic believed they had done the hardest part in the Jedi Civil War by winning the Battle of Star Forge. But this new threat would come very close to seeing one of its main forces, the Jedi Order, destroyed. 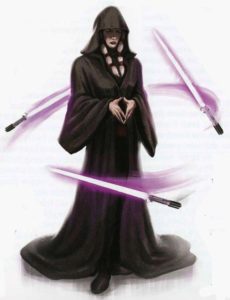 Darth Traya was once a highly esteemed Jedi master and a close friend of the apprentice who would become Revan. She was one of the archivists of the Order, which she left shortly before the Mandalorian War. She was one of the Revanchists and is believed to have died at the Battle of Malachor V. As the Jedi databases were destroyed during the Jedi Civil War, we are left only to guess at her identity. Several rumors circulate on the subject, often contradictory. This is also the case for his two apprentices. And as a Sith of the Empire of Revan, she was in charge of the Academy of Malachor V, an ancient building dating from the Old Empire that had survived the battle. Its new territory was called the Trayus Academy. She specialized in assassins and her training was particularly thorough and difficult. We do not know of any attempt to take significant power, some officials of his organization even tending to forget its existence. Then Revan and Malak disappeared from the hierarchy. To win the fights between potential rulers, she relied on her apprentice Darth Sion, a warrior capable of ignoring the effects of any physical injury by tapping into the Dark side. Former Jedi Council member Lucien Draay some say, because a Dark Jedi with a supply of prophecies called him that. But there was already a Zion assassinating Jedi since the defeat of Exar Kun. So who was he? His face was too slaughtered to be recognized. As for the third point of the triangle, Darth Nihilus, he hadn't done anything noteworthy before to talk about it. This former Revanchist was physically so altered by the Dark side that he couldn't even recognize his race under his mask. His mind had suffered too, he couldn't even speak intelligibly. And yet he was the most powerful of the three. 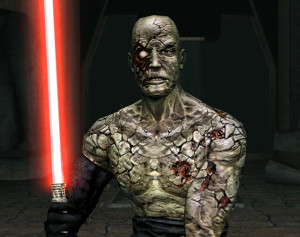 When Darth Traya and his two apprentices reached the top of Revan's Sith hierarchy, their troops had been greatly reduced by the defeats to the Republic and the Civil War for power. And it was not over, for Zion and Nihilus turned on her. They attacked her in the heart of Trayus Academy, defeated her and subjected her to a ritual cutting her off from the Force. She manages to escape her prison before they execute her. In any case, it was not long before they divided up their troops and went their separate ways. They had been trained as assassins, they organized themselves as such, in hiding and waiting for the best moment to strike. A year after the Battle of the Star Forge, the Republic attacked Korriban but found only deserted buildings. The Jedi Council meets on Katarr, a Miraluka colony. It was then that the Ravager arrived, a Centurion-class cruiser believed to have been destroyed in the Battle of Malachor V and become Darth Nihilus' flagship. He did not deploy troops or fire missiles to the surface. He performed a ritual from the Dark side to suck life through the Force. He left only one survivor, Visas Marr, whom he took on as an apprentice. The assassins under his command and that of his colleague attacked several other targets, forcing the Jedi to go underground so as not to be targeted. The Republic did not suffer a major attack or battle for the next four years, but found itself cut off from one of its main military and diplomatic organs. Perhaps even the most prestigious. Thus handicapped, she found herself greatly slowed down in all her projects. And still, the two acolytes were hunting new targets. 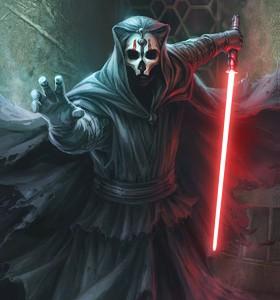 The fall of the Triumvirate was ultimately caused by its former leader. Hunted by Darth Sion, she took refuge with one of the most talented Revanchist generals, who had cut herself off from the Force following the battle of Malachor V: Meetra Surik, also known by the nickname of the Exile. By helping him to become a Jedi again, she manages to find what her apprentices had decided in her. Together, they sought to find the last survivors of the Jedi Council. Darth Traya pretended to want to rally the troops against his former apprentices. Obviously, she was lying. She let the Exile gather around her several followers of the Force that she trained, including Visas Marr the former apprentice of Darth Nihilus. But at the same time, she was weaving her own plans. She arranged for Nihilus to learn that the last masters were on Telos so that he attacked the planet. A lie. Three of the masters were on Dantooïne, where she murdered them. She drove the last of them mad, who was indeed hiding on Telos. And of course, she brought Meetra Surik up to date. Between the three, there would necessarily be deaths. While waiting for the result, she left for Malachor V where Darth Sion bent his knee in front of her. The Exile soon followed, but with other intentions. She defeated the last two members of the Triumvirate, then deactivated the force field that had held the pieces of the planet together since the Battle of Malachor V. Before dying, acknowledging her defeat, Darth Traya begged her victor to find her leader, Revan. , disappeared in the Unknown Regions. And until the end, she didn't recognize any Sith Empire lurking in that direction.

Add a comment from SWTOR - The Triumvirate of Malachor V