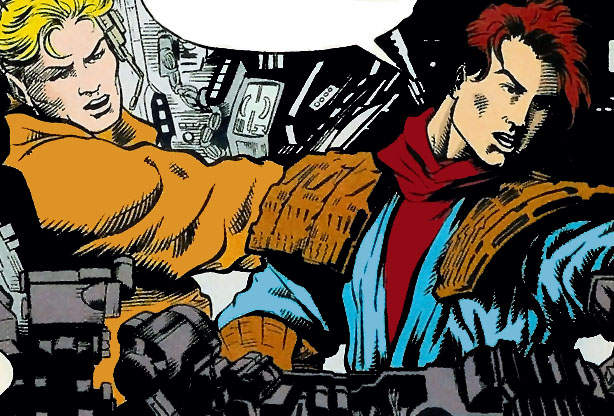 Originally from Alderande, Lien-Tsai Qel-Droma belonged to a powerful Jedi dynasty, She did not mismatch in a family that provided several great names to the Order. But those who have marked galactic history the most are his two sons, the twins Ulic and Cay. Very early on, she realized that she was too emotionally invested, and that she would be unable to properly teach them their way in the Force. She then sent them to the best teacher of her time, the Arcanian Arca Jeth. The latter therefore took them under his wing, joining the twi'lek Tott Doneeta as the master's personal apprentices. 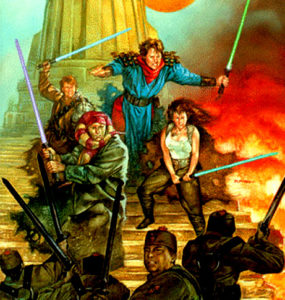 The two twins may be physically identical, but they do not have the same personalities or the same talents. Ulic quickly established himself as one of the best students and a leader of the Arkania academy. More discreet and satisfied with his status as a "follower", Cay has specialized in technology and mechanics. At the end of his training, it was he who took care of the maintenance of the droids used for various exercises including those of combat. Tott Doneeta completed them since he specialized in animals. Then came the time of Trials to see if they were worthy of becoming Jedi Knights. In - 347 before the Treaty of Coruscant, the Onderon system joined the Republic. Arca Jeth was to serve as a special observer for his integration. He delegated this task to his three apprentices, so that he could judge how they would fare. Ulic was logically named leader of the trio. Three days after their arrival, the observation is a disaster: the civil war explodes and Cay loses his left arm from the first fights. He will recover that of a droid and graft it himself, a sign of his talents. But this resounding failure is not to be blamed. One of the two sides of the conflict is ruled by followers of the Dark side claiming to be Sith heritage. Freedon Nadd, founder of the ruling dynasty and pupil of the last Dark Lord of the Old Empire, is still present as a ghost and manipulates his descendants. Even Arca Jeth himself will end up captured by the schemes and traps of their enemies. 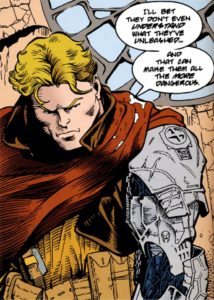 The situation is so dire that the Jedi are sending reinforcements. Among them, Nomi Sunrider / Da-Boda, a young widow who quickly falls in love with Ulic. And it is reciprocal. But he is no longer a simple apprentice. He is a true warlord, a high-ranking officer among the local faction allied with the Order. He realized his tendencies which promised to be a great leader. What can the future hold for him? We begin to predict a future for him in the Jedi Council. In the final battle, it is he who brings down King Ommin, the leader of their enemies. Released, Arca Jeth resumed his place as leader of the Jedi group. But the reputation of Ulic is made. Cay on the other hand, very few know him. He has become the shadow of his brother, his loyal lieutenant. And he seems to be satisfied with these menial tasks, useful without being dazzling. As Ulic chompes at the bit while waiting for new opportunities, Cay willingly helps rebuild Onderon. 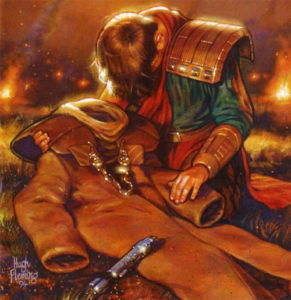 Before the end of the Onderon Civil War, the ghost of Freedon Nadd managed to lure Satal and Aleema Keto, heir to Empress Teta's system, into its nets. He converted them, and it was they who took over to face the Republic and the Jedi. They formed an organization called the Krath, which began to engage in terrorist acts. The Jedi Order held a conclave on Deneba to discuss their involvement in the conflict. Ulic was obviously in favor, but he found himself on the opposite side of his mentor Arca Jeth. It was then that assassin droids from the Krath attacked the meeting. The old Arkanian master died in the arms of his former apprentice. The Jedi parted ways without making a decision, but Ulic was determined to continue the fight. Nomi and Cay tried to stop him, but he had his plan. His brother even wanted to accompany him, but this plan involved only one person. But his lover and brother had to be ready to extract him as soon as possible. He was going to infiltrate the Krath. Another setback in his career, he was quickly spotted and captured. Tortured, poisoned, he ends up cracking up in the face of witchcraft and the charms of the very attractive Aleema. No longer able to distinguish correctly allies and enemies, he murdered Satal Keto so that his mistress would become the sole head of the organization. Then he pushed Cay and Nomi who had come to pick him up. He had sunk completely into the Dark Side. It was then that a new aspirant to the legacy of the Sith appeared: Exar Kun. 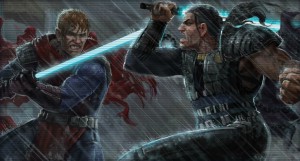 Exar Kun was also a former Jedi who had sunk to the Dark Side. Having found the last remnants of Naga Sadow's army, he had seized an ancient amulet. Ulic had his twin that Aleema had given him. As they clashed, they performed an ancient Sith ritual. The ghosts of the ancient Dark Lords were summoned and recognized them as their heirs: Kun as the master and Ulic as the apprentice. The new lord was struggling to rebuild the old order as the Sith Brotherhood, he left it to his new right-hand man to command the army. Engaged in a conflict with the Mandalorians, Ulic challenged their leader Mandalore the Indomitable to single combat. The vanquished passed into the service of the victor. He was victorious, thus doubling the size of his army. He considered himself powerful enough for a new head-on fight. Ignoring Exar Kun's advice and warnings, he took aim at Coruscant. The ambitious Aleema, disappointed to be lowered in the hierarchy and feeling her influence diminish on her lover, chooses the heart of the battle to betray. She ordered the retreat at the first difficulties. Ulic was captured by a group of Jedi, including Nomi and Cay.

The Sith was tried in a special session of the Senate. But Ulic mocked his judges and insulted them. Cay tried to defend his brother, but his intervention only earned him the target of the ancient Jedi's attacks. He even got rid of the chains that hindered him. It was then that a commando composed of Exar Kun, Mandalore the Indomitable and a few Massacre warriors appeared. In just one battle, the Republic suffered another defeat. Back at Yavin IV's camp, Ulic acknowledged his mistakes to his leader. The two convicted Aleema of treason and prepared for his execution. An act that Ulic accepted without regret. Weaned from the Krath mistress's spell, he emancipated himself from his influence and began to think of Nomi again. At the Battle of Ossu, Cay returned to assault his brother to try to bring him back to the Bright side. His ship was damaged and he crashed. Ulic followed him to face him in singular combat. He had always been the best at the lightsaber. Your Cay. And at the same time ... Something broke inside him. He realized how far he had sunk into the Dark Side. That he had become someone he had sworn to fight. He allowed himself to be captured by Nomi, who performed on him a ritual cutting the Force. It completed his will. 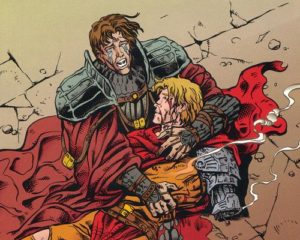 Broken, emotionally ravaged, cut off by the Force ... Ulic the fratricide revealed everything he knew about Exar Kun's plans, allowing the battle of Yavin IV to end the Great Sith War. Since he had cooperated and was only a shadow of himself, the Jedi deemed him harmless enough to let him go free. Overwhelmed by guilt, he was already condemning himself. He spent the next ten years looking for a secluded place that would not remind him of his past and mistakes and where he could die in oblivion. A situation that divided within the order. On the one hand, Nomi Sunrider supporters wanted to leave the past and traces of the Sith Brotherhood behind them to keep moving forward. Dominant faction since Nomi had become the Grand Master of the Jedi order. On the other, Cathar Sylvar became the spokesperson for those who felt that he had not paid enough and should have been imprisoned or even executed. Devastated by the deaths of loved ones during the war, Sylvar slid to the Dark Side. Collateral victim of this case, the young Vima Sunrider, daughter of Nomi from her first marriage. The teenager was abandoned by her mother overwhelmed by her position as Grand Master. And since no Jedi would agree to take their leader's apprenticeship away from her teaching, she realized that Ulic was the only one who could continue her training. And runs away to find him. 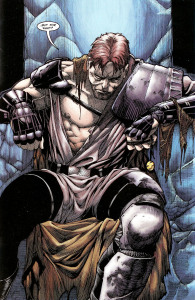 Guided by the Force, Vima found Hoggon, the smuggler who had led Ulic to Rhen Var, a desert planet at the end of the ice age. She reunited with the ancient Sith and used all her persuasion to teach her all the theory he was capable of. Hoggon left to warn the Jedi of what he had been involved in. Which led Nomi and Sylvar to Rhen Var. Ulic let the mother and daughter settle their affairs between them. But for the cathar, words would not be enough. The two clashed with a lightsaber. Until the old Sith decides to end it by presenting a choice to his opponent. He deactivated his weapon and waited for the killing blow. Sylvar realized that she was too involved, and that she would succumb to the Dark side if she struck. Unable to kill him, all he had to do was forgive him. It was Hoggon who shot Arca's former student Jeth down with a blaster shot. Ulic Qel-droma died in the arms of his great love Nomi Sunrider. And even though he couldn't feel the Force anymore, when he breathed his last his body dissipated inside her. Something only the greatest Jedi Masters are capable of. He had finally succeeded in achieving his redemption.


Do you want to be up to date and know all the tricks for your video games? In gamesmanagers.com we enjoy playing as much as you do and for that reason we offer you the best tricks, secrets or tips for you to play non-stop. We offer you quality content and always updated to keep you up to date. That's why, in our website, you will find not only videogame guides but also tricks, secrets and thousands of tips so you can play to the limit. Are you ready to get it? Enter now and enjoy your videogame!
SWTOR - December livestream summary ❯