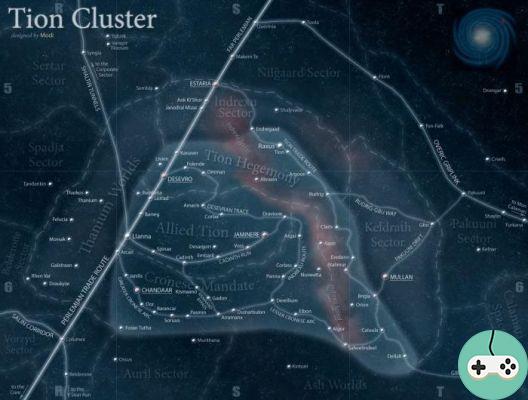 Amas de Tion is a grouping of planets located under an arm of the Perlemian Trade Route. It is mainly populated by human settlers who settled there over 25 years ago. And even before the Galactic Republic was formed, they had come together as an Empire and a Galactic Power. Not on a level equal to that of the Rakatas, or even as the current forms of Republic and Empire. But they were sufficient to have with the hutts a war which still resonates in history. 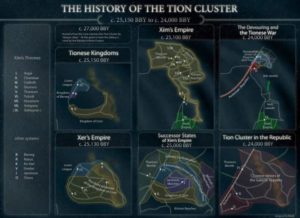 Although descended from the nobility, Xer was also a pirate leader. Around 21 before the Treaty of Coruscant, his troops were so feared that he used them as a base for some of the most formidable army in the area. At their head, he founded the Kingdom of Argai (name of the planet where he is installed). When the neighboring King of Cron offered him titles in exchange for his loyalty, he felt insulted and went to war. Conflict he won, and has since gone down in history as Xer VIII of Cron. He now had the means for his ambitions, and spent the rest of his life annexing the other kingdoms of Amas. The chronicles speak of eight wives and at least five sons: Xic, Xil, Xom, Xuc and Xim. He had them reared separately, each ignoring the existence of the others. He gave them the means to have their own pirate forces to see what they would do with it. And in this little game, it was Xim who showed himself the strongest. During the conquest of the kingdom of Cron, he distinguished himself by his brutality towards his noble opponents. When Xer VIII retired from business, he let him finish the conquest of the Livian League, the last independent territory of the Amas. Quickly, he eliminated his four brothers. Some say he also took care of his father. His brutality earned him the nickname Emperor Xim the Despot. 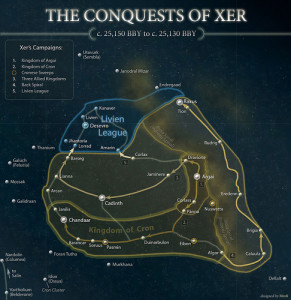 Xim and his troops rediscovered the science of managed portals, allowing them to strike farther than the range of their cruisers should have allowed them. His personal symbol, a white skull with stars shining in the eye sockets, was feared in several other areas. It was based on several technologies considered today as experimental or disappeared to increase its power. He is also the oldest warchief to use an army of battle droids. He also had a secret police in charge of tracking down and eliminating his internal opponents: the GenoHaradan. But the legend of Xim the Despot encountered a formidable enemy: the Hutt Empire. His first offensives were successful and he began to call himself Daritha Xim (Emperor Xim in rakata). But at the first battle of Vontor, he was defeated by Kossak Inijic Ar'durv. He returned to the charge, and the second battle of Vontor ended with a much more divided result. The Hutt had to create an alliance with the Klatooiniens, Vodrans, Nikto and Weekay to ensure a definitive victory. Some versions claim that the pirate emperor ended up exhibited as a slave before his execution. Kossak rose to fame as the Devourer of Despots (reportedly related to Jabba, but unconfirmed). However, the Queen of Ranroon, Xim's flagship, disappeared with her treasure on board. Between those looking to rediscover its technology and those more interested in its gold, ximologists always have new avenues to explore. And with such a name, it is impossible to deny the influence that his thirty years of reign had on his time. 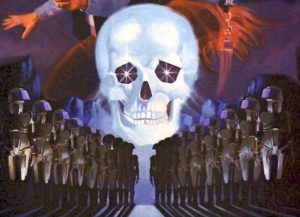 The lieutenants of the pirate warlord backed away from the hutts. Their leader had failed, what more could they do? Faced with the so-called War of Devouring, they had to give up part of their conquest. The Empire of Xim was divided into six independent states, and GenoHaradan went underground. For a thousand years, they remained focused on themselves. Until explorers from the Galactic Republic arrive, establishing the Perlemian Trade Route. An axis through which to move was simpler, faster. This awakened their pirate habits, triggering the Tionese War. Their raids led them to Coruscant. But they ended up losing. The Six Realms were overhauled and modernized, and turned into Republican territories that the Jedi could watch over. After all, thanks to the Perlemian Route, their main base in Ossus was not located so far from what is now called Tion's Hegemony. The emergence of the Sith threat has loosened the watch, forgetting that the Zionist nobility remembers the glorious days when Xim made them a galactic power. 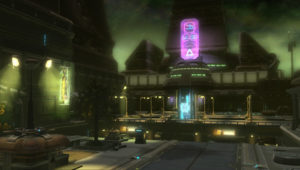 Detroit: Become Human - Sit back on your sofa and savor ❯